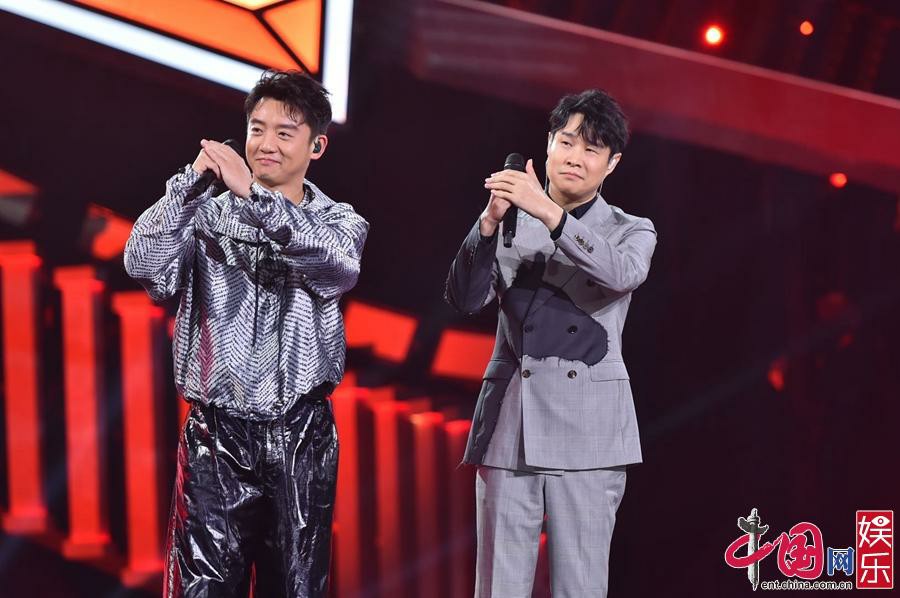 China Internet Entertainment July 17th The fifth season of Beijing Satellite TV's large-scale music program "Crossover Song King" jointly produced by Beijing Radio and Television and Tencent Music Entertainment Group continues to sing across the border this Saturday! On the stage where gunpowder smell continues to escalate, cross-border singers have shown their magical skills, not only frequently "subverting human settings" to refresh audience perception, but also practicing "eighteen cross-border skills". trick. In this issue, the re-organized "Challenger Alliance" Zheng Kai, Xiao Shenyang, Ling Xiaosu, Tang Yifei and Niu Junfeng will go all out to challenge the throne, while the song kings Chen Jianbin, Zhong Chuxi, Li Xiaomeng and Yu Yi on the throne will continue to guard the throne Waiting for the battle, is it true that the "Challenger League" can go to the first city, or the "King of Guardians" is playing a higher position? Let us look forward to it together!

After the hard training in the "Cross-Border Training Academy" last week, Zheng Kai and Xiao Shenyang will return to the cross-border challenge stage with a new look and confidence. In the first round of qualifying, the two chose a classic old song "One Cut Plum" that has been popular all over the world. The new subversive song adaptation is accompanied by the brainwashing steps of the two, so that the audience will be boiled. Incorporating magical rap elements, old songs and new singing, full of fun. In order to practice this magical song and dance, the two of them are suffering, but the strict and professional music judging panel said that they behave like "spicy hot pot"? Will their adaptations and performances be finally recognized?

Ling Xiaosu and Tang Yifei, who were in the invitation list of the "Crossover Song King" program, finally arrived at the crossover stage this week. They gathered the courage to break the barriers and sang bravely. They together with Niu Junfeng performed a Li Zongsheng's popular classic "Divine Comedy" "Recently annoying", the lyrics personally adapted by the three people are also full of insights into life. Ling Xiaosu and Tang Yifei even told the daily sweet trivia in the singing, which made the viewers feel distressed that the "light bulb" Niu Junfeng "eaten." Big Mouth Dog Food". Such a relaxed and witty stage performance, the music critics' evaluations are mixed. During the voting period, the cross-border singers felt as if they were on a roller coaster. In the face of sharp, high-energy poisonous comments, how would they respond? What touching "behind story" will Tang Yifei tell?

The four challengers showed their unique skills one after another. Who can get the chance to challenge the singer? Will they be able to get the stage for the show that they have carefully prepared? Stay tuned!

As "Old Friends" of "Crossover Song King", Chen Jianbin and Yu Yi returned to the crossover stage this week as "Song King". What surprises will the two people who are not new to the stage bring to everyone What?

In the program, Chen Jianbin changed the previous serious style and carried a "veteran cadre" mug, calmly facing the cruel competition coming. This time, Chen Jianbin was quite breakthrough in the selection of music, with a classic movie theme song "Unable to Love" to show the audience "Tie Han tenderness" side, full of affectionate singing, full of strength. Chen Jianbin, who was brave to break himself on the cross-border stage, accidentally exposed the "contrast cute" side. In the face of the performances of the challengers, he opened the "fancy praise" mode, and the program frequently spoke out "cute" words and faded. What kind of surprise performance will Chen Jianbin, the "overbearing president" halo, bring to the show?

And Yu Yi, who once made an amazing song, returned to the stage of "Crossover Song King" this time, which also brought many expectations. In this episode, he will look back to his original heart and return to the essence of music, and put a "silent" in a simple and pure singing. The interpretation is profound and moving, and it also tells about his ardent dreams of music, and the setting of the exquisite and dreamy hanging stage makes everyone more amazing! Can his music and performance impress the audience and the members of the jury? let us wait and see!

Little Shenyang, who has always been "on the laugh of the audience", unexpectedly released a "tears" in the challenge. A simple song for his wife sang and cried everyone. Little Shenyang sang in a soft and gentle tone. The short romance in the parents, when the sky was full of white snow, the affectionate interpretation of Little Shenyang made the guests present all burst into tears. In the show, Shenyang took the opportunity to express his deep love to his wife. What story is hidden behind their ten-year marriage?

Niu Junfeng, who has always appeared in front of the audience as a "gentle boy", this time turned into a cool boy on the street, performing a Beijing rap full of "Hutong Weier", ingeniously combining Beijing rhythm drums and pop music, depicting this Beijing The humanistic style of the city reveals the historical taste of old Beijing, and the atmosphere and pride when singing is full. He admitted that as a Beijing kid, he always wanted to sing a song in Beijing Wei as his hometown. The words full of Chi Zi made everyone admire. The ingenuity and details added to the song were also well received. Can such a passionate Niu Junfeng succeed in ascending to the throne this period?

From the brutal game system to the high-quality stage presentations of the cross-border singers, what kind of splendid audio-visual feast will be brought about by this powerful "cross-border song king"? Who will ascend to the throne? Brave to cross, the king is born fearless! Keep moving forward, life is more than that! This Saturday night, prime time, Beijing Satellite TV "Crossover Song King", so stay tuned!

As the co-producer of the fifth season of "Crossover Song King", all the songs in "Cross Border Song King" will be available for the first time on QQ Music, Kugou Music, Kuwo Music and National K of Tencent Music Entertainment Group Digital music platforms such as song.