The cinema is finally opening! What new movies are there? How to watch movies safely?

China News Client, Beijing, July 16 (Ren Siyu) "Finally!" "Finally!" "Finally!"   At noon on July 16th, the circle of friends of many film practitioners was "finally" swiped: The National Film Administration issued a notice on the 16th to promote the orderly opening of movie theaters under the normal conditions of epidemic prevention and control, which is clear and low risk On the premise that ... 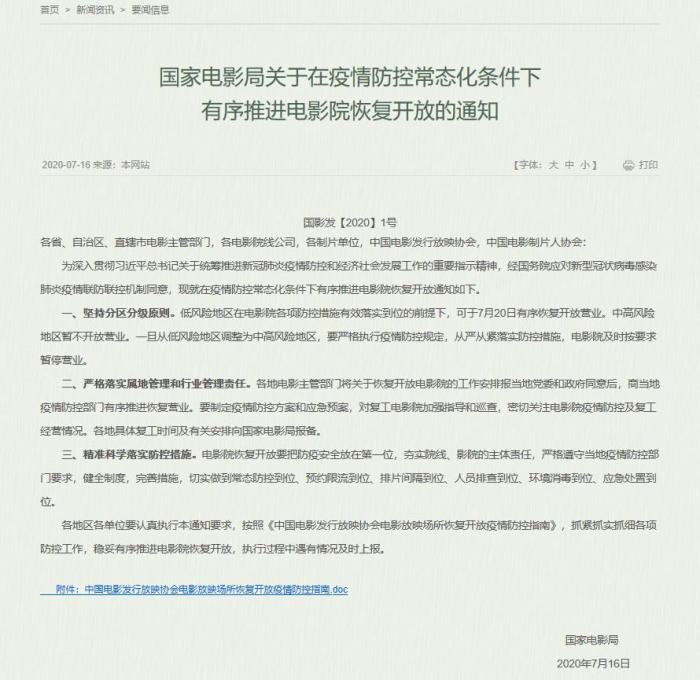 At noon on July 16th, the circle of friends of many film practitioners was "finally" swiped: The National Film Administration issued a notice on the 16th to promote the orderly opening of movie theaters under the normal conditions of epidemic prevention and control, which is clear and low risk On the premise that the various prevention and control measures of the movie theater are effectively put in place, the region can resume business opening in an orderly manner on July 20. Middle and high risk areas are temporarily closed for business.

Nearly 180 days after the shutdown, the cinema finally waited for the good news that the door was about to open.

Can you really watch a movie when you resume work on July 20?

"I think the first sight of Longbiao will be agitated and broken after I resume work. I want to take a photo hug with the first customer who walked into the studio." After receiving the notice, a studio worker was excited in the exchange group Said.

Shortly after the release of the resume guide, many well-known filmmakers also expressed their happiness on the social network. Previously, Jia Zhangke, the director of the theater's orderly opening, issued two "refueling" activities within 10 minutes, and officially announced the movie " "Walk until the sea turns blue" turned on, Dapeng also reposted Weibo and said, "Go to the cinema to watch a movie!"

In addition to the joy, major cinemas and related industries have also started a new round of preparations. Wanda Films official WeChat issued a message "Everyone’s Happiness is Back", and said that the specific information about the resumption of the cinemas in various places and the recovery after the restoration of the cinemas Information and highlights such as screenings and new films will be pushed in the future; Cat's Eye Professional Edition also said that the cinema box office data will be restored soon.

But at the same time, some studio workers expressed some concerns, "It's not easy to find people in a short period of time", "It must not be cleaned"... Closed for nearly half a year, many theaters have laid off employees during the epidemic due to cost pressures and other reasons Therefore, in the face of some sudden resumption of work, some practitioners said that although the guide mentioned that July 20th can be reopened, the theater itself still needs to do a lot of preparations, and it may take some time to truly open.

Data map: On May 9, 2020, pedestrians pass by the propaganda board of a cinema in Chaoyang District, Beijing that has not resumed business. China News Service reporter Hou Yushe

A studio manager also introduced to China News that the opening of his movie theater may have to wait until the end of July or early August. Cleaning and equipment maintenance are only a small part, but more specific preparations need to wait for local publicity. Departmental guidance, inspection and further arrangement of cinema lines.

In addition, it was mentioned in the notice issued by the National Film Administration that middle and high-risk areas are temporarily closed for business. This also means that there are still some theaters in Beijing that are difficult to open. Liu Xiaofeng, deputy director of the Beijing Center for Disease Control and Prevention, said at a press conference on July 16 that as of now, there are three medium-risk areas in Beijing, namely Huaxiang, Majiabao Street, Xincun Street in Fengtai District, and other areas in Beijing. Streets and villages are low-risk areas.

After resuming work, how should the audience watch the film?

After the resumption date is determined, how should cinemas in low-risk areas be opened in an orderly manner? What do viewers need to pay attention to when they want to go to the movies? Can you eat popcorn happily?

The National Film Administration pointed out in the notice that the principle of zoning and classification should be adhered to; the responsibility for territorial management and industry management should be strictly implemented, and the local film authorities should report to the local party committee and government on the work arrangements for the restoration of the opening of the cinema, and consult with the local epidemic prevention and control department Promote business recovery in an orderly manner; implement prevention and control measures accurately and scientifically.

A "Guide to the Prevention and Control of the Reopening of Film Projections at the China Film Distribution and Screening Association" was also launched to guide the film projection process after the opening, such as:

In terms of ticket sales, all real-name online reservations and contactless sales are adopted; cross-separated ticket sales are implemented to ensure that the distance between strange audiences is more than 1 meter; the attendance rate of each game should not exceed 30%.

At the time of entrance inspection, the film projection site shall be equipped with facilities for measuring body temperature and arrange for special personnel to be on duty. Register the audience information, check the body temperature, no one wearing a mask and a body temperature above 37.3 degrees is not allowed to enter. Equip hand disinfectants at the entrance of the cinema to guide employees and audiences to do hand hygiene.

In terms of screening times, the number of screening venues was reduced, and the daily schedule was reduced to half of the normal period. The time for watching movies was controlled, no more than two hours per session, extended breaks between sessions, and the theater was fully cleaned and disinfected; different movies Halls are lined up at the wrong time to avoid crowds entering and leaving;

What movies can I watch after I resume work?

With the resume notice, it is only the first step in the opening of the theater. It really allows the audience to see the movie. The major theaters also need to receive the movie copy and the movie key, which also takes time.

As one of the most important schedules of the year, what movies will this “late” summer schedule have? Looking back at old movies or looking forward to new ones?

At noon on July 16, the movie "The First Parting" was first announced for the first time and announced that it would be released nationwide on July 20. Subsequently, the movie "Pioneer" starring Jackie Chan and Yang Yang and originally scheduled to be released this year's Spring Festival also posted on Weibo: "The reassembly is complete! The Pioneer team is ready to go, and I look forward to seeing you in theaters!" Starring Li Hongqi and Li Yitong The movie "I'm Waiting for You at the End of Time" is scheduled to be released nationwide on the Tanabata Festival on August 25. The domestic animated movie "Mr. Miao" also released a poster saying "See you on July 31 in the theater." The domestic animation movie "Mr. Miao" also posted a poster saying "See you in theaters on July 31".

The movie "I Wait for You at the End of Time" is scheduled to be released on August 25. Source: Weibo screenshot

In terms of new overseas films, on the 16th, the movie "A Good Day in the Neighborhood" starring Tom Hanks revealed that it will be released soon, and the specific schedule is yet to be announced.

The movie "A Good Day in the Neighborhood" announced that it will be released soon.

However, it is worth noting that such a sentence is mentioned in the "Guidelines for the Restoration and Opening of Outbreaks of Film Projections of the China Film Distribution and Screening Association", "Control the viewing time of the film, no more than two hours per game, and extend the rest time between sessions." , Which means that all the movies that are more than 2 hours old may be difficult to get on the big screen in the near future.

In addition, in order to ensure safety, the guideline's requirement for movie theaters to "occupy no more than 30% of attendance" also poses significant challenges to the release of new films and box office revenue.

Whether it is an old movie or a new movie, it is the key to attracting audiences into the theater. At present, the audience is still looking forward to the theaters that have not opened for nearly half a year.

Recently, Cat’s Eye Entertainment, iQiyi Movies, and Weibo Movies jointly released the “Insight of Film Market Data for the First Half of 2020”. The report shows that the audience expectation index has rapidly increased from 54% in February to 88% in May, which is almost 90%; the proportion of going to the cinemas that "will not be in the near future" and "not this year" will continue to decline. In June, more than half of the public said that they "missed" the theater.

Source: "Insight on Film Market Data for the First Half of 2020"

The report also mentioned a set of data: As of July 1st, the "Chinatown Detective 3", which was forced to withdraw due to the epidemic, saw an increase of 1.265 million cat eyes in the first half of the year, "Ginger Ziya" added 548,000, and "Emergency Rescue" "Winning the Championship" wants to see more than 200,000 new additions. The cat-eye movie wants to watch the TOP10. The 2020 Chinese New Year files are all shortlisted. It can be seen that the audience's expectations for the "absent" blockbuster movies are not reduced.

As for the choice of watching movies after resuming work, nearly 30% of the audience expect comedy movies, followed by science fiction, and the support for suspense and action movies is approaching 10%. Among other factors for returning to the theater, "theater prevention and control measures" and "appropriate preferential fares" are also highly valued by the audience.

Although resuming work in the future will still face some specific problems, but with the expectations of enthusiastic audiences, many studio workers have also expressed confidence that "step by step, there will always be." (Finish)