Laurent Berger, general secretary of the CFDT, announced that his union was going to sign the wage agreement for the "Ségur de la santé" 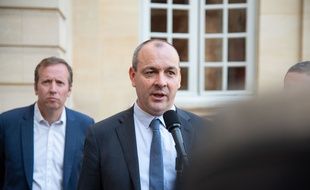 The secretary general of the CFDT Laurent Berger after a meeting in Matignon, July 9, 2020 - Louise Meresse / Sipa

The CFDT "will sign" the memorandum of understanding on the upgrading of non-medical hospital staff, said its secretary general Laurent Berger on Friday. This text provides for 20 measures, including a salary increase of 183 euros net in two stages, half in September, then in March 2021.

"This agreement is a gain in wages, it is the revaluation of the grids, declared on France Info the general secretary of the third trade union of the sector. The health federation decided yesterday [Thursday] to sign it, it will sign it and it can be very proud of this very useful, very concrete union work. "

Jean Castex is "frank, cash, direct", according to Laurent Berger, secretary general of the CFDT. "Now we judge the actions (...), we told him not to relaunch the pension reform, we told him the job first"
Follow our direct: https://t.co/0naQZOp7fu pic .twitter.com / 9cz2HkZshb

After seven weeks of negotiations and a final marathon session in the night from Wednesday to Thursday, the Minister of Health Olivier Véran and the unions have reached a draft agreement on the distribution of the 7.5 billion euros put on the table at the "Ségur de la santé".

"There are times when you have to conclude"

"A trade unionist will always tell you that he would have wanted more," but "that makes 2,196 euros more per year," said Laurent Berger, adding that "when we fought as our federation fought, we s 'engage on it'.

"There are times when you have to conclude" and "it's time to conclude", he insisted, saying "very proud that the CFDT knows how to be very firm in negotiations and in the end act the compromise , because it is positive for workers ”.

“A compromise that looks good” for FO

His counterpart of Force Ouvrière, Yves Veyrier, for his part praised on RFI "a compromise that looks good" and indicated that "we will know [it] during the day what will be the position of [his] union".

On the government side, which hopes to obtain a majority agreement by Monday, Olivier Véran "does not think that all the unions will sign". But the minister all the same praised on RMC and BFM TV "the biggest increase in income ever proposed in this country".

Castex government: CGT calls for demonstration and strike on September 17