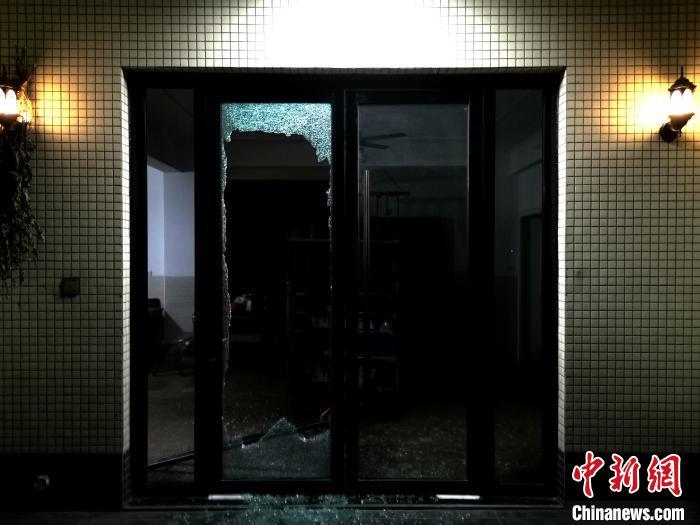 "The first sound was not very loud, but the second and third sounds were too scary. The thick smoke flared in the flames and ran more than twenty meters high. The "huge waves" set off by the explosion rolled up sand and hit the legs "It hurts, it hurts." At 2 o'clock on the 9th, when talking about the explosion in the village a few hours ago, Wang Shuyou, a villager in Yuansheng Village, Nanfeng Town, Guanghan City, Deyang, Sichuan Province, was sweeping. Wang Shuyou’s newly renovated three-story small building is about one kilometer east of the explosion point. The tempered glass on the main entrance of his first floor was shattered and glass slag was scattered on the ground. The cracks on the first and second floor walls were like vines.

The wall of an old house a few hundred meters away from the fireworks factory was cracked. Shan Pengshe

At 21:10 on the 8th, a fire broke out at the Guanghan Jinyan Fireworks Factory in Yuansheng Village, which caused an explosion at 22:25. The factory was in a state of suspension when the accident occurred. So far, the accident has caused 2 serious injuries and 4 minor injuries. In order to prevent the secondary explosion from endangering nearby residential houses, the local village committee informed the villagers not to rest at home at night. 20,000 people moved to a safe zone overnight.

The fire hose stretches for several kilometers and leads directly to the fire from the outside. Shan Pengshe

When a reporter from ChinaNews.net arrived at the entrance of Yuansheng Village at 1 am on the 9th, a cordon was pulled up at the scene. A group of fire trucks flashing red and blue police lights were roaring towards the explosion point, and the fire trucks and ambulances on standby were parked next to the village road. Many villagers gathered at the village entrance to wait for evacuation. Standing on the balcony of the villagers' house, the fire was clearly visible in the distance.

A house affected by the shock wave near the fireworks factory. Shan Pengshe

"I'm still afraid of coming now, but fortunately my family is fine." The four roller shutters on the first floor of the villager Zeng Weiyong's house showed different degrees of depression, and the ceilings on the third floor were almost all overturned.

After the open fire was completely extinguished, some rescuers withdrew from the fire and rested on the road. Shan Pengshe

The reporter walked from the village entrance to the explosion point, and saw multiple buses on standby along the way. "I received a notice from the company at night and hurried over." Jiang Chaoyan, a driver of a local bus company, said that if an emergency occurs, they will help the people evacuate as soon as possible.

Due to the lack of lighting equipment near the fire site, the State Grid Deyang Power Supply Company's urban power supply center urgently dispatched 4 vehicles and 6 staff to the scene to provide lighting. "To facilitate rescue, we erected two emergency lighting towers with a height of 10 meters and a height of 4.5 meters on both sides of the road, and also brought a generator." Zhou Weike, deputy captain of the Sichuan Electric Power Deyang Communist Party Service Team .

Fire fighting refers to combatants who pack up fire hoses to "clean up the battlefield." Shan Pengshe

On the way to the fire, fire trucks stopped by the roadside to stand by. Shan Pengshe

At around 6:30, the reporter walked through a large watermelon field and arrived at the Guanghan Jinyan Fireworks Factory where the explosion occurred. The fireworks factory can no longer see the original shape, only broken walls and black burning materials were on the scene. There are a lot of water in the plant, which is the trace left by the rescue overnight.

From a distance, only a part of the wall remains in the fireworks factory. Shan Pengshe

An veteran employee who did not want to be named and worked in the fireworks factory for more than 10 years is looking at the bombed factory alone. "Before the holiday on June 28, we cleaned the factory clean and wiped a machine for several hours." Looking at the mess, the employee's eyes were red. (Finish)