IMHO, you may only eat "fur" in Liangpi, Shaanxi

Author: Zhang Yuan Zhao Xiaoyan   Ingenious collision of oily and spicy seeds   Delicious taste with meat buns   Another can of local ice peaks   You will perfectly experience the authentic "Three Qin Set"   Come to Shaanxi,   How dare you not eat cold skin?   "What is it at noon today? What kind of dough is it?" This is a conversation that can often be heard between neighborhoods. Liang... 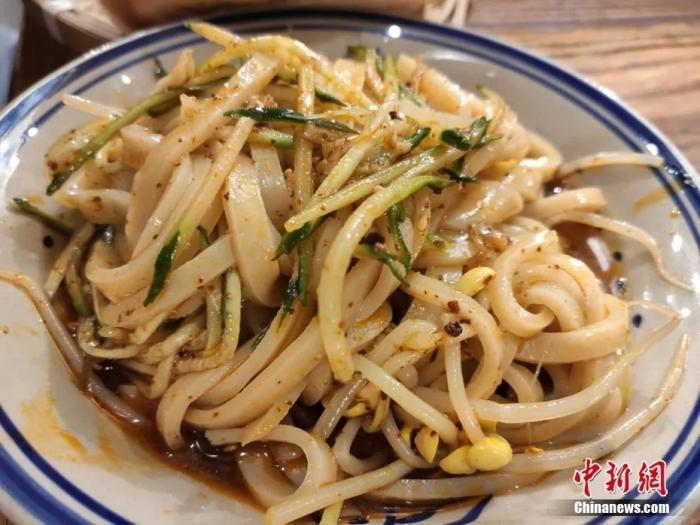 Another can of local ice peaks

You will perfectly experience the authentic "Three Qin Set"

How dare you not eat cold skin?

"What is it at noon today? What kind of dough is it?" This is a conversation that can often be heard between neighborhoods. Liangpi is an indispensable snack in the daily life of Shaanxi people. Shaanxi Liangpi, as seen by outsiders, may be a store that simply adjusts and mixes, but "Liangpi" is not just as simple as it looks.

The past and present life of Shaanxi Liangpi

Shaanxi Liangpi has a long history, and it is said that it originated in the Qin Shihuang period. It is said that one year there was a drought in Qin Town, Hu County, Shaanxi. The rice was withered and the people could not supply rice to the court. There was a rice named Li Shishi who crushed the rice into flour and steamed the dough to offer it to Emperor Qin Shihuang. Fate makes and eats every day, forming a prestigious traditional snack.

Among the flavor snacks in Shaanxi, "liangpi" is one of the most popular varieties. Men, women and children love it. It is sold throughout the year and more people eat it in summer. The streets and alleys of Xi'an, every town in Shaanxi, and even the countryside are everywhere. A table, a few small benches, is a Liangpi stall, as long as there are sold, someone will eat. Liangpi is not only a street snack, but also an elegant hall. Liangpi can also be seen in major hotels, restaurants and restaurants in Shaanxi.

Hanzhong rice noodles are typical traditional snacks in Hanzhong, Shaanxi. The soft, glutinous and spicy roots are the main flavor and taste of Hanzhong noodles. Hanzhong belongs to southern Shaanxi and is rich in rice. Using rice noodles as the noodles was first invented by Hanzhong people and has a long history.

Because Hanzhong rice is located in the northernmost margin of indica rice production in my country, it has a long growing period and rich material accumulation. In addition, the place of production has long illumination time, large temperature difference between day and night, and the translucent beige is inevitable. With such high-quality rice, coupled with thousands of years of Hanzhong noodle production technology and the recipes of seasoning water prepared by the people of Hanzhong for thousands of years, it is of course natural that Hanzhong rice noodles can stand alone.

Qinzhen rice noodles are made from indica rice produced on the west bank of Fenghe in Huyi District. The production process includes brewing rice, refining and steaming. Rice skin is usually cold food, so it is also called cold skin.

Qin Town is located on the west bank of Feng River in Huyi District. It used to be the place of Gyeonggi in the Western Zhou Dynasty. It has a mild climate, fertile soil and is rich in high-quality rice. The rice noodles made from the rice pulp produced here are known for their white color, smoothness, thinness, softness, flexibility and refreshing. Qinzhen's rice noodles are famous, mainly because the production of chili oil is very particular. The chili noodles are placed in high-quality oil, and are repeatedly boiled with pepper, fennel and other large fires. The more the more spicy, the more fragrant, The spicy oil also gets hotter and brighter.

The people of Qin Zhen claim that their method of making chili oil is something that others cannot learn, so the taste of Qin Zhen's rice noodles cannot be compared with others.

The main material of the sesame paste is Liangpi, and the auxiliary materials are vinegar, salt, taste, chili oil, sesame sauce, etc., which is sweet and delicious, and belongs to Shaanxi cuisine. In the rural areas of Shaanxi, steamed cold noodles with wheat noodles are also used. Rural people generally call it stuffed skin.

Rolling noodles are unique traditional snacks in the Guanzhong region of Shaanxi, especially in the Baoji area of ​​Xifu. Baoji Qishan rolling noodles were recognized as Chinese famous snacks in 2011.

The Qishan people's rolling noodles are very extraordinary. The rice noodles and stuffed skins elsewhere are made into a paste and steamed on a special iron cage. Qishan rolled noodles are rolled into noodles and then steamed. After steaming, they are cut into strips that are slightly wider than cold noodles. The eating method is basically the same as rice noodles. Unlike rice noodles, rolling noodles have a hard texture. High toughness and elasticity. People around Baoji like to eat, and it has also been popular in Xi'an in recent years.

But in fact, there are shops of different sizes in every corner of Shaanxi, and the taste of each one is different. So, instead of having four kinds, there are tens of thousands of kinds.

Take you to see the Liangpi scene

The reason why Liangpi has spread to the present day naturally has its truth. Whether it is from the method of making it or the matching of spices, it is extremely particular.

Shaanxi Liangpi pays attention to "ribs, thin, thin, and lang", ribs are the strength, thin is steamed thin, thin means thinly cut, and lang means soft skin. The deliciousness of Liangpi is based on its unique production process. It is mainly divided into two categories from the raw materials. One is Liangpi, which is based on rice, which is called rice noodles or hot rice noodles by Shaanxi people, and the other. It is cold skin made from wheat as the main raw material, and it is called noodles or rolled noodles by Shaanxi people.

Master Han is the owner of a Mipi shop that has been open for two years. After his permission, he photographed the preparation process. When talking about how to make the sauce, Master Han said: "This is the secret recipe."

Let's take a look at the birth of a bowl of hot rice noodles:

Pour the rice paste into the cage cloth on the cage drawer, spread it slowly with the back of the spoon, cover it and wait for 3 minutes.

After 3 minutes, lift the cage, take out the steamed rice noodles, and lay it flat on the countertop brushed with cooking oil.

Prepare the ingredients bowl, put the appropriate amount of salt and garlic water into the bowl.

Pick the cut rice noodles into the bowl with chopsticks.

Pour Master Han's secret sauce into a bowl, and a bowl of fragrant rice noodles is basically completed.

Finally, put in the chili oil made by Master Han, and a bowl of rice noodles is done.

Yuanjia Village is located in the hinterland of Guanzhong Plain, Shaanxi, China. It is a typical traditional Chinese village and a famous folk town. Two years ago, Master Han self-taught Liangpi practice and came to Xi'an with his family from Yuanjiacun, bringing Yuanjiacun's special way of eating. The spicy oil, rice, seasonings, etc. used by their family are directly supplied by Yuan Jiacun. Each ingredient undergoes multiple procedures and is strictly controlled.

Affected by the epidemic recently, there are fewer people coming to eat, and the benefits are not good. Master Han said that they will continue to do so, serving everyone with quality and quantity, waiting for the epidemic to end, and when the spring is blooming, they will meet together to eat cold skin.

After talking about Mipi, let's take a look at the noodles again.

In Luoma City, near Xi’an Bell Tower, Master Luo and his lover run a small noodle shop. He wakes up at 7 a.m. every day to start making batter, oily spicy peppers and various side dishes needed for noodles. After everything is ready, 10 a.m. Point business on time.

Let's take another look at the process of making dough:

Put the dough and various side dishes into the basin, add the appropriate amount of seasoning, and stir evenly. The noodles are mainly divided into hot and sour flavor and sesame sauce. You can choose according to your taste.

Master Luo said: "The reason why my noodles are delicious is because of the strength of the cooking, and the special oil and spicy peppers are beautiful."

After mixing well, place it in a bowl, and prepare an authentic Shaanxi noodle.

Master Luo said: "The most important thing for making batter is batter and seasoning. The consistency of batter is just right, and the chili oil smells delicious when it is eaten. The impact on the sales of batter during the epidemic is very great. When the epidemic improves, I hope everyone I can taste it."

Some people like to eat spicy, some like to eat sour, and some like to add a tablespoon of sesame paste. But in fact, Liangpi's soul is mainly in the spoonful of oil and spicy spicy seeds. Whether it tastes good or not depends mainly on chili and chili oil, so many merchants will work hard on chili. Different chilies have different tastes.

People in different places have different habits of eating Liangpi. Northerners eat more noodles. They like to eat it with meat and steamed buns, and then come to a bottle of Bingfeng, even if they eat well.

The portion of Liangpi is generally relatively small. Adults may not be able to eat one portion, so if you want to find something else to eat with him, it must be a steamed bun. The steamed buns are combined with the meat with bacon sauce and Baiji buns. The bacon meat is carefully prepared with more than 30 kinds of seasonings. It is fat and lean, with a ruddy color and rich flavor. Bai Ji Man's skin is crunchy, and the inside is soft and sticky. If you bite it down, it will be endless.

Most people in southern Shaanxi like to eat hot rice noodles, and they are more willing to pair it with tofu. The main raw material of kidney bean curd is soybeans. After soaking and grinding into a pulp, the bean dregs are filtered off with gauze and then boiled. Then add the water and vegetable sour soup. Order the acid water every four or five minutes. You need to spoon slowly , So many times. When tofu is formed, the tofu is filtered out and extruded. String bean curd has a delicate texture, like white jade, and is matched with the ruddy skin of the cold skin, which makes people have an appetite and can't help but want to enjoy it.

But these also only represent the way most people eat in a certain place. The taste and taste are still determined according to their own preferences.

Shaanxi Liangpi has no exquisite display design, rich and diverse exquisite ingredients, and it does not need a high-end dining environment. It can even make snacks at home, but it has become an indelible taste in Shaanxi people's memories.

For Shaanxi people, Liangpi is indispensable no matter winter or summer. A bowl of Liangpi, with its unique taste and simple production, has a million fans. This kind of delicacy mixed with simplicity is like telling people that it is true. Later, Shaanxi people no longer ate cold skin, but feelings.