The magic of Annie MG Schmidt: 'Exaggeration was her trademark'

Jip and Janneke, Minoes, Abeltje and Dikkertje Dap: these are just a few of the iconic characters that Annie MG Schmidt brought to life on paper. On May 21, it will be 25 years since the legendary writer died, a day after her 84th birthday. Two Schmidt experts about her unique qualities and legacy. 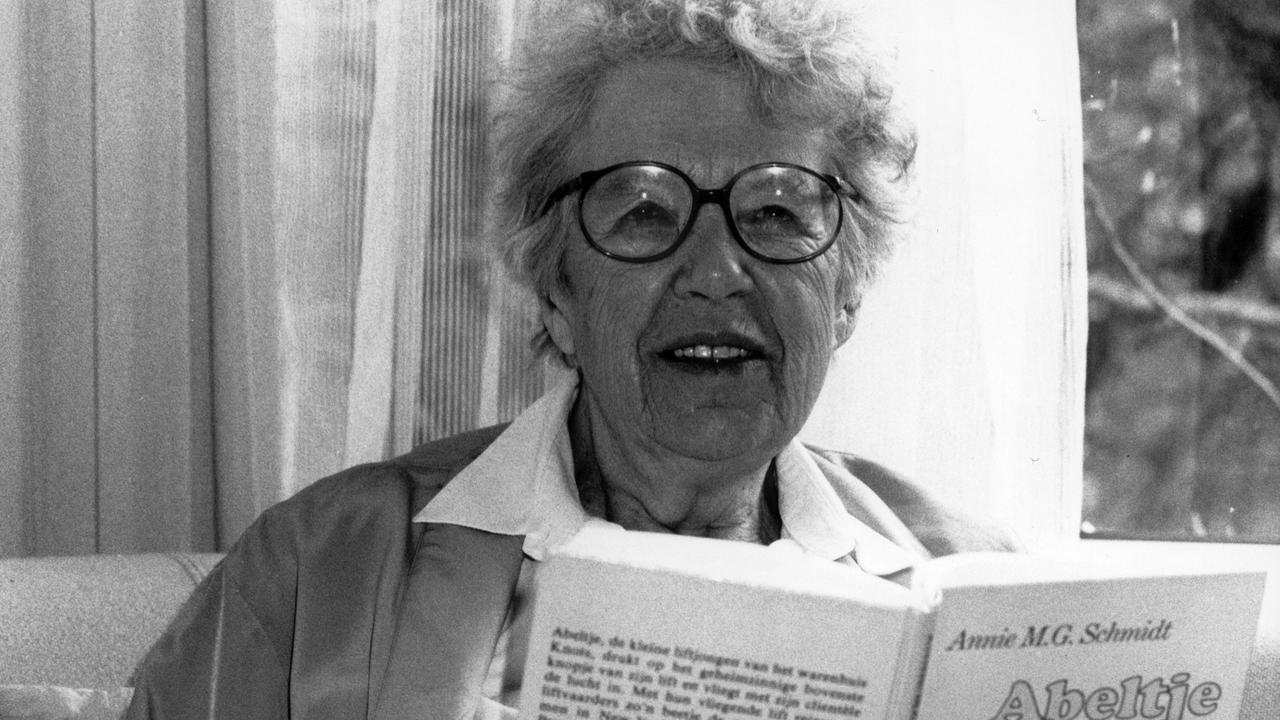 Jip and Janneke, Minoes, Abeltje and Dikkertje Dap: these are just a few of the iconic characters that Annie MG Schmidt brought to life on paper. On May 21, it will be 25 years since the legendary writer died, a day after her 84th birthday. Two Schmidt experts about her unique qualities and legacy.

"I won't kick them, but I'm not particularly fond of children," Schmidt told Ivo Niehe in 1990. An infamous statement by the writer, who often surprised her audience.

"It's typical of her adversity," said Joke Linders, who received her PhD from Schmidt in 1999 and also wrote Annie MG 's book The ABC . "Exaggeration was her trademark. If someone drove her into a corner, she said the opposite."

Schmidt was born in Kapelle in Zeeland in 1911, the daughter of a pastor and a former teacher, who previously lost two daughters of the same name and therefore cherishes her third daughter immensely.

She has little contact with her father and Schmidt does not feel at home in the village. Unlike her fellow villagers, she does not wear traditional costume, behavior that is reflected in her stories that she would write later.

"Annie was pretty unmanageable from the start," says Linders. "She had a very complicated childhood, with little pleasure." As soon as Schmidt can stand on her own two feet, she leaves for The Hague. "She developed an obstinacy that disobeyed and pushed the boundaries."

“Sometimes he flew very low with his aircraft above the HBS, in which I was beating with a beating heart. I was afraid to tell my fellow students that it was for me. They wouldn't have believed it. ” Annie MG Schmidt in her book What I Remember

As a young girl, Annie flies, without her parents knowing about this, with a pilot over The Hague and she has a relationship with the married chemist Dick van Duijn, with whom she later has a son Flip. "She was a violent, intensively living woman," says Linders.

Meanwhile, Schmidt already regularly writes verses and ends up in the library world, where she becomes director. In 1946 she came from this 'good world' to Het Parool , where she met like-minded people and was given plenty of room for her creative spirit.

She gets to know writer and poet Han G. Hoekstra, who she admires greatly and has some of her work read. Linders: "He thought it was brilliant and motivated Annie to continue with this."

One of those verses was De spider Sebastiaan , which almost every child has been read to. In the verse, the spider is not allowed to weave within a web, as this can kill him, but he does it anyway - with a fatal consequence.

“Sebastiaan said stubbornly: No, the Drang is too big for me. All others said dearly: Sebastian, this will kill you. " Annie MG Schmidt in her book The Spider Sebastian

"It has a clear moral: if you do something that people say is not so sensible, it often does not end well, but it does indicate that you must do what is essential to you," explains Linders. .

"That is reflected in all of Annie's poems and stories: characters like Abeltje and Minoes all do dangerous things to help someone."

The life of Annie MG Schmidt

Portrait, probably made in the 1960s. © BrunoPress

Schmidt in her living room in her home in Berkel (1965). © BrunoPress

Schmidt with a selection of her own books in 1989. © BrunoPress

Portrait of Schmidt, probably made around 1985. © BrunoPress

Together with Hetty Blok and Leen Jongewaard after the Golden Harp was awarded in 1967. Schmidt received the prize for her work for the series Ja Zuster, Nee Zuster. © BrunoPress

"Not difficult to place Annie"

The time that Schmidt spent at Het Parool is interpreted in the series Annie MG (2009) by Malou Gorter (known from the series Oogappels ).

"Annie was very smart, authentic and had guts," says Gorter. "She was someone who could write and think very freely. Despite being in a stifling time with reconstruction, she did what she wanted to do. At the same time, she was trapped in how she grew up and had her insecurities. I liked duplicity. "

Gorter also recognized this in himself. "It was actually not difficult at all to put Annie down. At the time I was quite tired of filming, so I found it very exciting. I saw a lot in Annie; her insecurity and that feeling of being liked."

"Work was seen as anarchism"

Schmidt's first children's books appeared in the early 1950s, such as Abeltje and Jip en Janneke . "Where at that time especially good books like Pinkeltje were popular, Annie suddenly came across them with a kind of mischief," says Linders. "With that she immediately acquired a special place in the children's book world."

The reactions to her verses and stories can actually be divided into two camps, explains the Schmidt expert. "It was the time right after the war, so the feeling in Annie's work - doing what you like, following your own urge - people liked that very much." It brought her many fans.

But the critics regarded Schmidts' work by that free-spirited anarchist. Found that she sometimes went too far. "Is a poem about a boy breaking a train possible?" While, remarkably, she also received criticism that her work was just frumpy. "In Jip and Janneke , the father read the newspaper and washed the mother, which was called outrageous because it was role-affirming."

A group of children in 1966 with Dikkertje Dap after the verse of the same name. (Photo: BrunoPress)

In any case, Schmidt's work is anything but inciting anarchism and certainly not violence, says Linders. "She wants to let your imagination speak and show how much richer your world will become. When a forbidden button is pressed in Abeltje , she wants to show that something fantastic is happening, full of adventures and new worlds."

According to Gorter, Schmidt was able to "think like a free child". "Annie was brought up on a strict self, but she knew well what had been secured and what she wanted to get rid of. She kept that childlike freedom."

"Never do what your mother says, it will all end up." Annie MG Schmidt

What intrigued Gorter most about Schmidt is that she was so capable of breaking taboos. "She didn't do this consciously, but she had a natural disposition to think about things that are considered normal, but aren't. She has written groundbreaking musicals about women's freedom and homosexuals."

When asked whether there are contemporary authors who represent the tone and feel of Schmidt, Linders replies that Toon Tellegen, Ted van Lieshout and Joke van Leeuwen do come close.

"They manage to express difficult situations in a light tone. People like Tellegen have influenced her enormously with her language and free spirit. She has had a huge influence on the generations after her."

But there is no second Annie MG Schmidt. "We still recognize the feeling of need for comfort, encouragement and jokes to put things into perspective," said Linders. "That makes us people as we would like to be. She feeds that. Her work is therefore timeless and universal."