The epidemic "Mulan Army" in the high wall: women are weak, but police are just 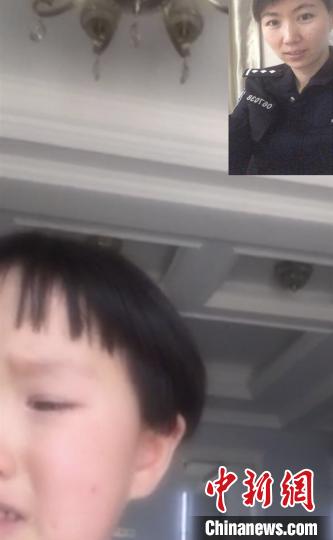 (Fighting against New Crown Pneumonia) The war epidemic "Mulan Army" in the high wall: women are weak, but police are just

China News Network, Zhoushan, May 6 (Apprentice reporter Li Dian correspondent Zhong Shanshan Hu Xiao) "Women are weak, but police are strong." During the fight against the New Coronary Pneumonia epidemic, this phrase was often used to describe the Policewoman flowers. In the detention center of Dinghai District, Zhoushan City, Zhejiang Province, a team of 6 female policemen and 7 female auxiliary policemen are responsible for the detention of all female supervised personnel in the city. Faced with a fully enclosed working environment and overloaded work intensity, they used their perseverance and dedication to build a "high wall" of epidemic prevention and became an indispensable "Mulan Army" on the battlefield of anti-epidemic.

When Wang Zhoufei video with the child, the child burst into tears because of missing his mother. Photo courtesy of Dinghai Public Security

"The big deal is not looking in the mirror"

The closed environment of the supervision site and the concentration of personnel have brought many difficulties to the isolation work. In order to prevent the hidden danger of epidemic outbreaks in women's prisons, Han Xiaoyan, the head and deputy director of the women's prison in Dinghai District Detention Center, began researching and formulating new service operation rules and the life system of supervised personnel in the New Year's Eve to ensure that the prison The epidemic prevention and control norms are orderly and followable.

In the first few days, due to lack of manpower, Han Xiaoyan was like a gyroscope that could not be stopped. Commanding and dispatching, sterilizing the cell, talking about education, summarizing materials, and even helping the supervised personnel to cook ... The days of hard work caused Han Xiaoyan to suffer. Severe hair loss. "Don't look in the mirror before the big epidemic is over!" She said jokingly.

Under the influence of Han Xiaoyan, since this year, none of the local women's supervision teams have taken leave, and they have always stayed on the front line of their posts.

During the epidemic, the detention center in Dinghai District implemented a three-shift service model, with 20 days of closed duty in the prison area and 20 days of isolated observation in fixed places, which means that once they enter the station, they can only return home after 40 days.

Discipline police Wang Zhoufei is the mother of two children. The eldest daughter is in elementary school and the youngest daughter is just 3 years old. Since the lover is also a policeman who is on the front line against the epidemic, the life and study of the two children are all taken care of by the elders.

On the 10th day of the closed work, Wang Zhoufei received a WeChat video sent by his younger daughter during the break, just connected, the other end of the picture is how her daughter is crying: "Mom, I promise to listen to you and dad in the future, Come back soon, okay! "Despite distressing the child, Wang Zhoufei chose to stick to his post.

During his work, Wang Zhoufei was too busy to have a good chat with his family, but his notebook was filled with records of conversations with the supervised. "After work, I still worry about whether the two children eat and sleep well," she said.

"It's over after suffering"

The patrol group of the detention center is responsible for 24 hours of uninterrupted video observation of all supervised personnel, which is one of the important positions for discovering hidden safety hazards in the detention center. This work not only requires the staff to have a meticulous work attitude, but also to endure loneliness and boring.

As one of the members of the women's patrol group in the institute, the 43-year-old auxiliary police officer Zhang Yina can be regarded as the oldest sister in the group. Since the epidemic, due to increased work pressure, Zhang Yina's body has been overwhelmed. The leader of the detention center considered replacing her with a relatively relaxed position, but she was worried that her new colleagues could not adapt, so she declined the leadership's good intentions: "I am used to this job, and the experience I have accumulated over the years, don't waste it, special period Well, it ’s over. "

In order to stay awake during the night shift, Zhang Yina always puts a pot of cold water in the office in advance, and feels sleepy, so she wash her face with cold water ...

In this way, under the joint adherence of this "Mulan Army" and other colleagues, the detention center in Dinghai District achieved "zero" infection and "zero" accidents by supervisors. Within the high wall, they temporarily bid farewell to the roles of mother, wife, and daughter, and carried the heavy burden of women's supervision in the detention center in Dinghai District, supporting the "half of the sky" on the anti-epidemic front of the prison. (Finish)