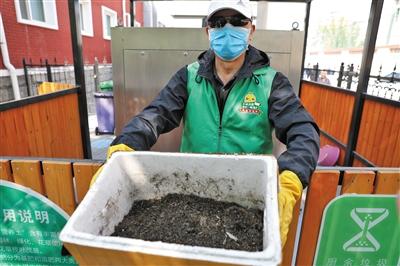 Set up "artifacts" in the community, turn food waste into fertilizer

Many districts in Beijing have implemented individual waste sorting measures. Some districts have set up waste sorting "red and black lists" to conduct interviews and inspections on the units listed in the "black list"

The new version of the "Beijing Municipal Waste Management Regulations" will be officially implemented on May 1. How is the community in Beijing currently prepared? The reporter recently visited Haidian, Chaoyang, Dongcheng, Pinggu and other districts and learned that many communities have implemented personalized waste sorting measures such as regular and fixed waste placement, local disposal of kitchen waste, and point exchange.

34 groups of trash cans are reduced to 5 drop points

In Tianshui Xiyuan Community, Liulitun Street, Chaoyang District, two garbage mobile patrol collection vehicles, each loaded with kitchen waste bins and other garbage bins, came to the downstairs of Building 10, waiting for residents to put in garbage. This is a new model for garbage classification and launch in this community.

Li Ying, the secretary of the Tianshui Xiyuan community, introduced that the community has implemented the “three concentrated” garbage classification method. The original 34 sets of trash bins in the community are now reduced to 5 fixed-point placement points.

The trash bin is put in every day from 6:30 to 9:30 and 5:30 to 8:00. Residents who missed the time can go to the garbage mobile patrol collection vehicle for delivery. The two garbage mobile tour collection vehicles regularly stop at the 12 buildings in the community for half an hour, and tour once a day to collect kitchen waste and other garbage. Residents can check the time and place where the patrol car stops in the publicity manual issued by the community. During the epidemic, residents have more time at home, and the community has appropriately extended the dumping time of the trash can station, and added manual duty to facilitate the residents to put in.

There are more than 2,100 residents in the Tianshui Xiyuan community. According to community statistics, the average amount of garbage generated per month is about 110 tons. Before the implementation of the "three concentrated" classification method, the community produced more than 6 tons of kitchen waste per month, and the separation rate of residents' kitchen waste was only 6%. Today, the community can sort out 13 tons of food waste each month, and the household separation rate has increased to 12%, doubled.

73-year-old Aunt Lin recalled that since the implementation of evacuation of buckets and stations and regular scheduled delivery, the community environment has also changed a lot. "Before there were too many trash cans, the smell was particularly heavy in the summer, and flies and mosquitoes flew around. Now these phenomena are gone."

Li Rong, deputy director of the Liulitun Sub-district Office in Chaoyang District, introduced that the current "three concentrated" garbage classification model has been launched in the two communities of Tianshui Xiyuan and Lishui Jiayuan, and plans to promote it in all streets in the future.

Liulitun Subdistrict organized party and government organs, institutions, large enterprises, supermarkets, catering units, etc. to establish a self-discipline association for garbage classification in social units, and opened a "red and black list" of garbage classification. Recognition and rewards are given, and units with lower scores are included in the "black list" for interviews and inspections.

Li Ziying, a staff member of Erlizhuang Community Construction Workshop, introduced that Erlizhuang Community has at least 5 groups of garbage sorting and dropping points, all of which are equipped with four types of garbage bins. In addition, there are 16 groups of "kitchen waste + other garbage" trash bins in the community. "Follow-up, we will also improve volunteer services at several key garbage placement points to guide residents in correct garbage classification."

There are 16 residential buildings and 1938 residents in Erlizhuang Community, Xueyuan Road Street, Haidian District. Zhao Yuan, deputy chief of the Urban Management Department of Xueyuan Road Street, introduced that the waste sorting work in Erlizhuang Community began in 2012, mainly with secondary sorting. As the new regulations are about to be implemented, a new round of waste sorting work began in Erzhuang District early this year.

The new regulations propose that kitchen waste treatment devices that meet the standards can be installed in conditional residential areas. Li Ziying introduced that the community has introduced a "kitchen waste recycling machine", which can absorb the daily food waste generated by residents and convert it into nutrient soil, and realize the recycling of food waste at the doorstep of the community.

“After the community units and vegetable stations produce kitchen waste, put perishable kitchen waste into the machine for composting. After 24 hours, they can produce nutritious soil, which can be used for green planting after secondary fermentation.” Li Ziying said.

In the community roof garden, the planting area, the rose area of ​​the flower shed area, and the plants such as green dill have used the black, powdered nutrient soil that the kitchen waste turned into. "Although this machine cannot digest all the kitchen waste in the community, it allows residents to see the benefits of garbage classification more directly." Zhao Yuan said.

In Min'an Community, Beixinqiao Street, Dongcheng District, the reporter saw a similar local food waste disposal machine. The person in charge of the community introduced that the machine can process about one-eighth of the community's food waste and produce fertilizer.

In Binhe District, Binhe Street, Pinggu District, there is an intelligent garbage collection box at the garbage sorting point. When residents put garbage, they sort and pack the domestic garbage, paste the QR code they have received, and then put it into the recycling box.

After the garbage is thrown, the points will be entered into the resident account at the same time, and the residents can use the points in exchange for rewards, including daily necessities such as rice noodles, oil, toilet paper, and toothpaste.

"Many residents have classified garbage as a habit"

In order to promote waste classification, Zhang Yulan, an old resident of Binhe District, summed up a smooth one. “Classification of waste is not difficult. The classification guide is turned over several times. It takes only half a minute to look at it at home.”

Wang Yuebo said that waste sorting is now well-known in Binhe District, and many residents have regarded waste sorting as a habit.