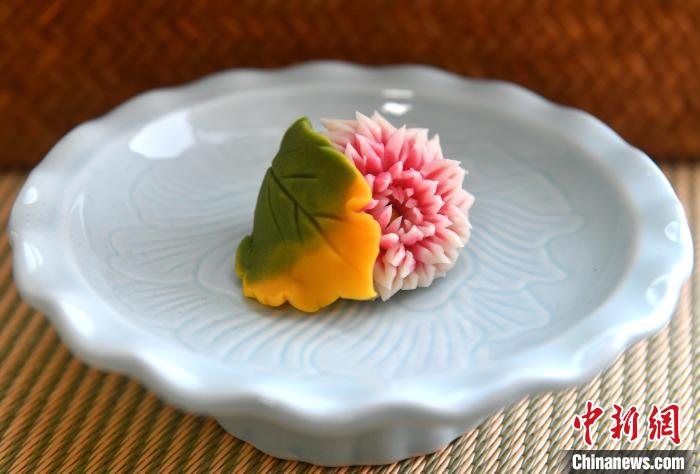 China News Service, Fuzhou, April 29 (Ye Qiuyun) "Some wagashi looks, you look very simple, but it's actually difficult to make." On April 28, "Post 90s" Fuzhou girl Shilin was bowing carefully. Carving the Japanese fruit in her hand, she said so.

The kneaded wagashi fruit is placed on the glassware, one hand gently rotates the base, and the other hand gently cuts the shape with needle chopsticks, repeatedly turning, lightly cutting the fruit, and repeating the cycle. Shilin said it was difficult to cut some shapes.

The picture shows the Shigoi made by Shilin. Photo by Lu Ming

Half an hour later, an exquisite chrysanthemum shape and fruit were presented. The Japanese fruit that is not as big as the slap makes you move with your index finger. You want to watch it carefully and taste it.

According to reports, Heguo is a Japanese-style tea snack. Its skin is made of beans, sugar, glutinous rice and other ingredients, and the filling is made of grain fruits and vegetables. The raw materials for making Japanese fruit are taken from nature, and the bright colors on the outer skin are made from edible plant toner.

The small and exquisite size, shaped by the craftsman of Heguo, can show changes such as flowers and birds, wind and moon, etc., so it is also called "flowers blooming in the tea room". It is also this that fascinated Shihlin, she said: "The vitality of the Wagyu is that its shape can be created by anyone, which deeply attracted me."

The indissoluble bond between Shilin and Heguo had to be mentioned a few years ago. At that time, Shilin began to study the tea ceremony. Because the tea ceremony was inseparable from the arrangement of tea seats, she began to learn flower arrangement again. During this communication with many Japanese teachers, she found that Waguo was a very beautiful thing, so she started Learning and fruit making.

The picture shows the Shigoi made by Shilin. Photo by Lu Ming

"I have learned a lot of things myself. I have been involved in woodworking, oil painting, violin, etc. I like Heguo because I feel that I am needed by others, so I continue to stick to what I am doing now." It's time.

Because of her liking, she also began to have her own creations in the process of making wagashi. The sheep's trotters often seen in Fuzhou, the kapok loved by Cantonese people ... The plants and flowers liked by different cities and different people have given Shilin some creative inspiration.

She said that after studying the technology, she observes the scenery around her, and then presents it with the shape of Japanese fruit. "It's not a very earth-shattering big change, it's just a reflection of what you observe."

Art comes from life. In Shilin's view, heguo is an art about the five senses. Only by observing life in detail, can he make delicate and nimble.

In Shilin's work room, the reporters were greeted by many different shapes and fruits. Flower shaping is a major feature of her creations. According to different festivals and different years, the works will also be innovative. Shilin told reporters that her continuous imagination stems from her delicate capture of life.

Shilin showed reporters several thick brochures and introduced that this is the brochure I collected when I went to travel, visit museums and so on. "Most museums do not allow photography, and there will be some of the best-looking works and the most famous works in the pavilion in the brochure, which can be collected and turned over when there is no inspiration."

In addition to insisting on creation, Shilin also opened classes in the museum and fruit creative workshops he created. Her students come from all corners of the world, many of whom are attracted from other places. Shilin said that in the process of teaching, she is also learning from students the philosophy of life.

In the course of teaching, students are prone to make mistakes if they are not careful. She said that you need to guide them at this time. After you make a mistake, what can it be changed to help create a new shape and mobilize their imagination and self-confidence. "Mistakes are not terrible, but you have to learn to accept your mistakes and then finish this work."

Shilin also had his own perseverance when teaching. She said that the most terrible thing is, after making a mistake, "Oh, don't do it", and then just go to the next one or give up. "I don't really want this to happen in the classroom. What I hope is that through the course as a carrier, let everyone feel the beauty around them." (End)