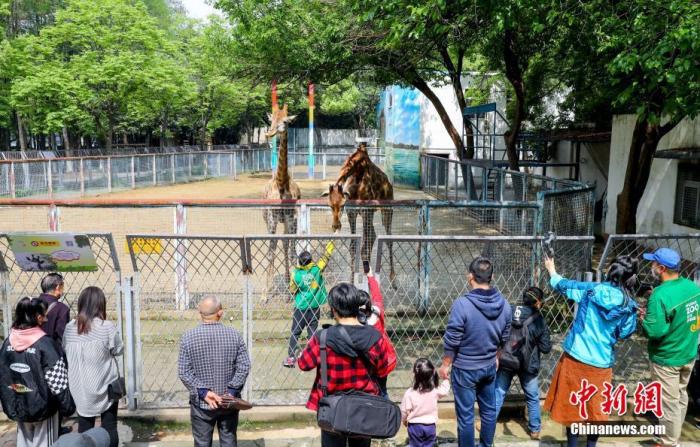 China News Client, Beijing, April 24 (Ren Siyu) Wuhan has been "unblocked" for half a month, and daily life has gradually restarted. On April 22, the Wuhan Zoo resumed its orderly opening, and the small animals officially began to "open". According to the staff of the Wuhan Zoo, a total of 2131 tourists entered the park two days after the park was opened.

Little Pony, Little Elk ... Long time no see, many new members have been added to Wuhan Zoo. Everyone also gave three newly born animals special names: "Anti-epidemic", "Unblock", " Restart ". How have the animals been during this time? Are there any new surprises in the reopened zoo?

On April 22, tourists play in the Wuhan Zoo. On that day, the Wuhan Zoo was reopened. During the epidemic prevention and control phase, the daily limit was 15,000, and the contactless ticket sales method was adopted. China News Service reporter Zhang Changshe

Two days after the opening of the park: 2131 visitors enter the park

For safety reasons, the Wuhan Zoo is open daily from 8: 00-17: 00. Contactless ticket sales are required. Tourists need to show the mobile phone health code at the door and measure body temperature. Only the health code is "green code" and the body temperature is below Only visitors at 37.3 ℃ can enter the park.

The staff of Wuhan Zoo said that at 8: 5 in the morning on the 22nd, Master Wang was the first to enter the park with an old age card. She is 65 years old and lives in a nearby community. She has been walking with her husband since the district opened before April 8; At 9:01, the zoo welcomed the first child to enter the park. 7-year-old Cui Mingxuan did not go out for three months. The first time he went out was to see the small animals.

On April 22, the penguins in Wuhan Zoo penguin hall were in a good state. The open-air animal venues in the park are normally open. The four venues such as the giant panda pavilion, hippo pavilion, rhino pavilion and baboon pavilion are only open to outdoor areas. China News Service reporter Zhang Changshe

In addition to the tourists visiting, on the day when they resumed entering the park, netizens around the world also saw lively animals from live broadcasts and videos.

In the three months before the door was opened, the zoo ’s small animals were not greatly affected. The panda sisters "Fat Girl" and "Spring Beauty" gained 15 pounds and 10 pounds, respectively. In the Panda Pavilion, visitors can also experience a novel project-smell panda poop and see if there is a "scent of bamboo leaves". However, to avoid gathering, indoor venues are currently not open.

It is understood that the open-air animal venues in Wuhan Zoo are open normally. The four venues such as the giant panda pavilion, hippo pavilion, rhino pavilion and baboon pavilion are only open to outdoor areas.

On April 22, the panda "Spring Qiao" was in the venue outside the panda pavilion. China News Service reporter Zhang Changshe

At the Wuhan Zoo, visitors can not only watch the various animals in the exhibition area, but also see the peacock "hanging out". The popular science writer and the netizen garden director of the Wuhan Zoo said that the peacocks here are free-range and can be seen in many animal cages. They live more comfortably, not only afraid of people but also animals. Sometimes it will annoy other animals because of "too arrogance", and the panda will even chase it.

On the first day of reopening, Wuhan Zoo welcomed 1,030 visitors, and the following day, 1,101 were welcomed. The staff reminded that the zoo's instantaneous current-limiting carrying capacity during the epidemic prevention and control phase was 15,000. When the instantaneous volume of tourists reaches the upper limit of 90% of the current limit, all self-service ticket machines will be shut down (reservation of online applet ticket sales), and the automatic ticket vending machine will be used to resume ticket purchases when the number of people drops. When the instantaneous flow of tourists reaches the limit flow, the park will be suspended, and the park will resume immediately after the flow of people drops.

From the announcement of the suspension on January 22 to the opening of the park on April 22, the Wuhan Zoo was closed for a full three months. On the morning of the 22nd, the zoo official micro issued a "thank you letter".

Affected by the epidemic, Wuhan Zoo once issued a "materials urgent" request for help, saying that the feeds of Daigo and Penguins were out of supply, hoping to get support from all walks of life to ensure the normal life of "bear children".

After learning the news, many enterprises and citizens gave their love and sent loach, small crucian carp, polyphemus and various feeds to solve the urgent need for animal "ration". An enthusiastic elder brother drove more than 100 pounds of crucian car at the first time, but later discovered that it was pickled fish, the animals could not eat, so they had to take it back.

On April 22, Wuhan Zoo released a "Thank You Letter" to thank you for your help in the past three months.

Although the zoo has not been open for three months, the staff and breeders have not been idle. In addition to disinfecting the park, taking care of small animals, and interacting with netizens, they also did a lot of zoo enrichment work.

For example, the black leaf monkey exhibition area invited a professional Fengrong team to "renovate". Some beautiful climbing frames were added in the exhibition area to restore the forest feeling. The breeder also designed a series of fancy shape for the black leaf monkey, small bamboo balls, small bamboo baskets, fruit hamburger skewers, gift bags, safes and other shapes, but the monkeys want to eat snacks, you can get "a fee effort".

The "small bamboo ball, fruit skewers" feeder designed by the keeper of the Wuhan Zoo for the black leaf monkey.

Why "embrace" them? Zoo breeder Huang Lei said that this is actually making food for the monkeys. In the wild, primates spend a long time each day searching for food. Under captive conditions, animals do not like to live boringly without gaining food and opening their mouths. Compared with simple and direct feeding, animals prefer to obtain food through their own efforts.

On the day of the park reopening, Yang Yi of the Animal Welfare Studio also showed you a bamboo tube-shaped "toy", a seemingly ordinary small bamboo tube with holes, filled with red panda snacks, which turned the red panda to roll and play The toy used for zebra and sika deer can let the leopard in the sports field feel the smell of nature.

A variety of feeders, sandbags that help kangaroos build muscles ... Wild animals need to survive with their own wisdom experience, and in the zoo, these small designs can help small animals improve their quality of life and let them more Show natural behavior.

Many people remember the famous saying of "Animal World": "Spring is coming, everything is recovering, and it is the season of animal mating ..." During the time when the park was temporarily closed, many new members were added to the Wuhan Zoo, 5 little black swans After breaking out of the shell, the red duck, red-crowned crane, bar-headed goose, peacock, etc. have also bred or are hatching small life.

Among them, there are 3 newly born small animals with special names.

Just at 8 am on April 8th in Wuhan, "Better", a little pony with a beautiful mole in the shape of a "small star" was born, and a little elk was born in the afternoon. The staff was very happy to pick them up separately. The names "unblocked" and "restarted", and a small elk born on April 2 also has the new name "anti-epidemic", they have become the "Auspicious Three Treasures" in the zoo.

Some netizens wrote on Weibo the feeling of visiting the park for the first time: "I like the cuddly call of the black swans, the eclectic flamingos, the sternness of the baby penguins, the peacocks with screens everywhere today, but also There are a few swans that are hatching babies ... Our zoos are all round and round, which is quite gratifying! "

While welcoming everyone to visit the park in an orderly manner, Wuhan Zoo is also reminding tourists to watch animals in a civilized way.

On the 23rd, Wuhan Zoo Weibo released a video "Professional Team Tells You What You Can't Do When Visiting the Zoo" to remind tourists to visit the park in a civilized way.

On the 23rd, the staff of the Wuhan Zoo took a humorous video to remind tourists "what you can't do when visiting the zoo", such as climbing the railings, frightening animals, flapping the glass, and the most important thing-do not feed animal.

This video was quickly liked by tens of thousands of reposts. The "Netizen Gardener" flower completion eclipse was also introduced in the live broadcast the day before. In fact, the zoo ’s small animals have enough food every day, and they also have their feed. Strict nutrition management, so do not need to feed. Tourists should take a safe tour of the park and care for and respect these little lives of nature. (Finish)