The Tokyo Metropolitan Government has put together a policy on measures to be taken in the event of an emergency declaration for the Tokyo area. In principle, karaoke shops and izakayas are closed.

To request closure from karaoke stores and izakayas if declared an emergency Tokyo, April 6, 20:35

The Tokyo Metropolitan Government has compiled a policy on measures to be taken in the event that an emergency declaration is issued in Tokyo, and requests that karaoke stores and izakayas, etc., be closed in principle.

In response to Prime Minister Abe's final coordination to issue an “Emergency Declaration,” Tokyo has drafted a policy on measures to be taken if a declaration is issued for Tokyo. .

In doing so, we ask the residents not to go out except when necessary for maintaining their lives, such as going to a medical institution or buying food, and to business operators, there are several people gathering together. Request self-restraint for events that may cause a condition.

On the other hand, sales of daily necessities such as food and pharmaceuticals and financial services such as banks are necessary to maintain social and economic life. And asks you to get it.

This is a draft policy of measures to be taken by the Tokyo Metropolitan Government when the government issues an "Emergency Declaration" based on law.

In addition, for commercial facilities, part-time shops, shopping malls, home centers, etc., will be requested to close except for sales offices that sell food and medicines and other essential items.

On the other hand, small-scale stores with a floor area of ​​100 square meters or less will be requested to take measures after taking measures to prevent infection.

In addition, schools other than universities, etc., in principle require the use of facilities and suspension of events, and nursery schools and nursing homes for the elderly need to take measures to prevent infection. It states that services that are not required may require usage restrictions.

On the other hand, facilities required to maintain social life include medical facilities such as hospitals and pharmacies, grocery sales facilities such as supermarkets and convenience stores, wholesale markets, housing and lodging facilities such as hotels and inns, apartment houses, trains and buses. , Taxis, rental cars, ships, airplanes and other transportation means, logistics services such as home delivery, factories, financial institutions, public offices, and public baths.

In addition, facilities that provide meals are needed as living infrastructure, and restaurants and restaurants are taking measures to prevent infection, as well as requesting reductions in operating hours at night and on holidays. On the other hand, izakaya and others are requesting closure.

Whether to continue business ... many shop owners worried

When asked what to do when an emergency was declared at one of Tokyo's leading shopping streets, Togoshi Ginza shopping street in Shinagawa-ku, Tokyo, many shop owners were worried about whether to continue business.

According to Makoto Shirai of a Chinese restaurant, "The new corona has caused the business to be in the red, but restaurants are required by the town people. To continue responding to needs, the restaurant will continue unless instructed to close. I'm going to do that. "

He says he has already received an emergency loan from a financial institution to pay his employees salary. "If the number of customers is extremely low due to the declaration of emergency, I think we must consider canceling business. I want the government to think about compensation. "

Also, Makoto Otake, the owner of a stationery store, said, "There is only one stationery store in the shopping district, and I do not know if it is really possible to close the store when there is demand. It is completely paperless even as telework spreads Some people come suddenly to buy printer ink and notebooks, "he said.

On the other hand, Mr. Tetsuro Kamei, a spectacle shop owner who closed temporarily from the 6th, said, "Some customers repair glasses and wanted to continue business, but voluntarily refrain from operating for the health of themselves and their families. Some of the shops in the shopping street are still confused when asked to refrain from self-control, and I want the government to show them what they can do as soon as possible. " .

A woman in her 80s shopping at the Togoshi Ginza shopping street said, "I rarely go shopping at department stores and basically do this in this neighborhood, so I am troubled if a nearby store is not open. Recently, supermarket products are almost completely gone, so it's not a good idea to buy them up. "

In the office district, Marunouchi ...

In Marunouchi, Tokyo, we heard that the government is making final adjustments in order to issue a law-based emergency declaration. Of these, a 39-year-old pharmacist working at a pharmacy in Tokyo said, “We hope that the number of people going out by declaration will decrease and the number of elderly people dying will decrease. I want you to do that. "

According to a 75-year-old man who works for an apparel company, "Telework is not possible due to logistics-related work, and sales are lost if department stores are closed. It is very difficult to spread infection unless a declaration is issued now. I think it's an uncontrollable situation and I want to endure it. "

A woman in her 30s working for a human resources service company said she was instructed to switch to work from home from the 7th, saying, "I am worried that I can get through all the work by working from home, but I do not know unless I try it, so I will do my best I want to. "

Life/Entertain 2020-04-09T07:27:47.651Z
Emergency Declaration Separation between Tokyo and the country due to lost time and reduced time

Life/Entertain 2020-07-10T09:18:39.939Z
Visiting the Civil Rescue Team: Daily training does not relax and stays ready during the main flood season Life/Entertain 2020-07-10T09:12:17.514Z
Confined to Menorca: "The passengers in the row before mine have tested positive for coronavirus. All huddled without control" 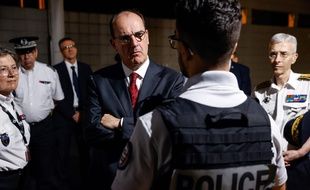