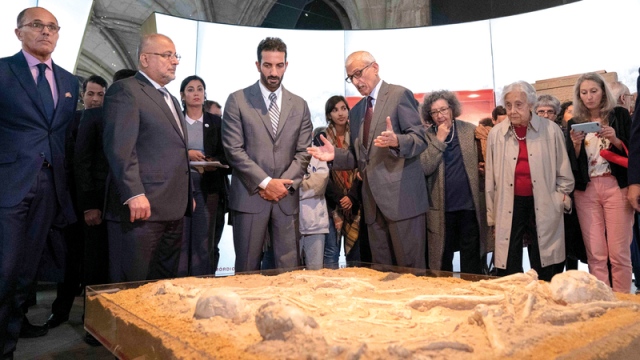 Sheikh Sultan bin Ahmed Al Qasimi, Chairman of Sharjah Media Council, said that the Sharjah Archeology Exhibition, which is hosted by the National Museum of Antiquities in Lisbon, reflects the important archaeological richness of the emirate. Distant, proves the history of human settlement of the region, and highlights the civilizations that have passed and originated in them.

This came during the opening of Sheikh Sultan bin Ahmed Al Qasimi, representing His Highness Sheikh Dr. Sultan bin Mohammed Al Qasimi, Member of the Supreme Council and Ruler of Sharjah, yesterday evening, the exhibition of Sharjah Archeology under the title of culture and identity of Sharjah's archaeological heritage in the halls of the National Museum of Antiquities in the Portuguese capital, It included 150 artifacts, organized by the Sharjah Archeology Authority in collaboration with the Institute of Archeology at the University of Nova Lisbon, and will run until April 2020.

Sheikh Sultan bin Ahmed Al Qasimi toured the exhibition halls, which included selected models of archaeological discoveries in the sites of Sharjah, which represent different civilizational periods, from the stone ages, through the prehistoric times, the Bronze Age, the Iron Age, the Hellenistic period, and the pre-Islamic period. To the Islamic era.

The exhibition provides the Portuguese public, tourists, interested in and archaeologists with the opportunity to learn about the cultural and archaeological heritage of Sharjah between the present and the past, and the Department of Sharjah and Portugal.The two sections included information about the archaeological finds in Sharjah, which was found by the Portuguese mission from Nova University. In the second hall, the organizers of the exhibition reviewed the most important archaeological discoveries, dating from the third century BC and the third century AD, known as the pre-Islamic period, and the Islamic period, which extends from the Abbasid era to the present day. The Islamic period represented artifacts discovered in Dibba Al Hisn, Khor Fakkan, Al Lu'ali, Al Dhaid and Kalba.

The pre-Islamic period displayed in the same room was represented by archaeological finds from Maliha, dating back to an important historical period in the history of the Arabian Peninsula, which included the amphora tractor from the island of Rhodes, a large pottery jar imported from southern Spain, as well as an important collection of discoveries of Dibba Al Hisn. In the third exhibition hall, entitled "Time of Sunrise", Sheikh Sultan bin Ahmed Al Qasimi briefed on archaeological exhibits from the Iron, Bronze and Stone Ages. The exhibition, which was opened in the presence of the Portuguese Minister of Culture, Dr. Graça Fonseca, and the UAE Ambassador to Portugal, Moussa Abdulwahed Al Khaja, is a new human cultural and cultural window opened by the Emirate of Sharjah to view the world. In the dialogue of the other, the definition of the other us.

Sheikh Sultan bin Ahmed Al Qasimi, the representative of the Portuguese government, intellectuals and visitors, said that «His Highness Sheikh Dr. Sultan bin Mohammed Al Qasimi, the patron of the exhibition, pays great attention to the sector of archeology and archaeological discoveries, believing that the culture is an integrated act should not be ignored any part, even The real knowledge is formed among the members of the community. ”

He invited members of the Portuguese community to visit the exhibition, in order to stand and live directly and historical human experiences from an area in the heart of the Arabian Peninsula, and to learn about the boiling closely, and discover its secrets and history.

For her part, the Portuguese Minister of Culture stressed the keenness of her country and its various institutions to adopt such creative initiatives, which contribute to the achievement of intellectual and human rapprochement between peoples.

She pointed out: “Sharjah and its ruler have a special place for us, and the reputation that the emirate has achieved with the wisdom of its ruler has led it to assume world cultural centers and has been able to build a unique relationship with the various countries of the world away from political diplomacy.We are delighted to be with you today in this knowledge-rich exhibition. The treasures on offer are a source of pride for the expeditions, and we thank you for giving us the opportunity to see them. ”

Word in the golden record

Sheikh Sultan bin Ahmed Al Qasimi, Chairman of the Sharjah Media Council, took note of the Golden Book of Major Visitors to the National Museum of Antiquities in Lisbon. The exhibition was attended by a number of Arab ambassadors to Portugal, officials, representatives of the Portuguese Ministry of Culture, Portuguese military institutions and a group of intellectuals, archaeologists and visitors.

- 150 artifacts included in the exhibition, which will run until next April.