Her desire to find a place that brings together as many fashion designers as possible in the country; she was motivated by the artist Sumaya Al Suwaidi to launch the initiative «Mobile Boutique», which she considered the best solution to allow the designers citizens and residents to communicate with the public, and a platform to display his work 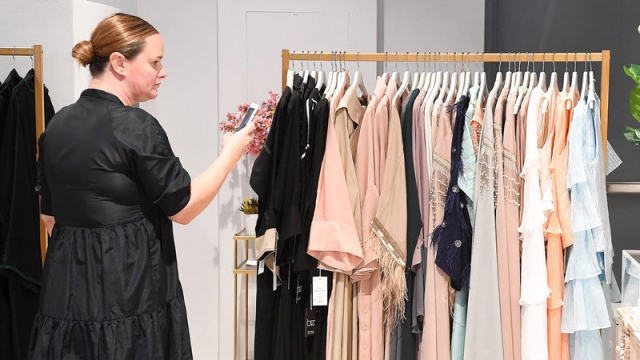 Al Suwaidi added: “To solve this problem I organized the Abu Dhabi Fashion Show, which was held for four days twice a year at the Abu Dhabi National Exhibition Center, then moved to Zayed Sports City. Over time, I developed the idea through the Mobile Boutique project. To rent a shop in a commercial center for a specific period and invite designers to showcase their products in it, so it is considered as a house for designers, and a space to communicate among themselves and exchange their experiences and also communicate with the public, and to inform people of what they offer for a fee for the leased space, and we do not get any percentage Sales, the beginning was the opening of the bot K at the World Trade Center in Abu Dhabi last month of Ramadan, and then we moved now to the Galleria Center oryx on the island, that lasts for six months, and then we will decide if we will renew at the same place or move to another place ».

Al Suwaidi pointed out that the new boutique witnessed the participation of 16 designers, including four jewelry designers, the rest specialized in designing dresses, abayas, evening dresses, jalabiyas and handbags. The collection also includes Emirati designers from across the country, in addition to Arab designers. The products on offer, where each designer selects the space that fits in the place, adding: «Before participating see the products designed and make sure they fit the level we are looking for, and we choose what suits the season we offer and the general taste in the country, while we leave for each Mmh determine the period of time and space that fits ».

One of the designers participating in the boutique is Saudi designer Sarah Abudawood, owner of the brand «Yatagan» jewelry, which explained that she participates for three months, and that this participation is an opportunity for her to meet with customers in Abu Dhabi, explaining that «Yatagan» Turkish word meaning dagger, and combines in its designs Architecture and Kufic calligraphy, and the presentation of jewelry pieces combining words and designs, such as the word freedom in the form of a butterfly and a word of love in the form of a heart, along with letters and names, as it said that it launched its latest collection at the Saudi design exhibition in Riyadh, entitled «My Tower».

Nora Ali, the UAE designer, said that her participation in the boutique is due to their style of work and professionalism in organizing things, pointing out that she inspired her product line from the word “Be” or “Connie” in Arabic, expressing her belief in the importance of Women are always renewed and glamorous and follow-up to what is new in the world of fashion, adding: «I do not like the routine in my designs and always innovate each group in a different spirit, starting with the group (Be beautiful), the second (Be elegant), and the third (Be strong), To encourage women to highlight their thought and personality to be beautiful inside and outside ».

«House of designers and space for communication among themselves .. And to inform people of their works».