[Soup] 'Compensation for damages after strike', is it true that foreign countries do not do it?

1. The ruling and opposition parties are fighting over whether or not to pass the 'Yellow Envelope Act'. The key is to limit the company from claiming damages to the union, saying that it suffered damage after the strike. 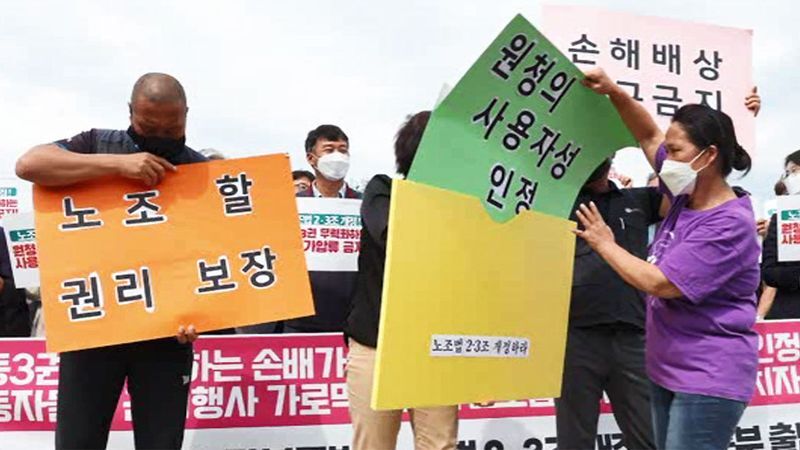 1. The ruling and opposition parties are fighting over whether or not to pass the 'Yellow Envelope Act'.

The key is to limit the company from claiming damages to the union, saying that it suffered damage after the strike.

Civic groups gathered to set up a campaign headquarters to fix the law, and in

foreign countries, strikes were not compensated for damages, but we were the only ones abusing it, and they came up with this kind of 'fact check'.

Quite a few media outlets are also quoting and publishing this claim as it is.

But is this claim true?

In conclusion, it is not true.

If the strike took place in a foreign country illegally, and if the employer suffered damage because of it, the union is being held liable for damages.

In February 2012, controllers in charge of ground control of aircraft at Frankfurt Airport in Germany went on strike.

They demanded a salary increase of up to 50% while working hours were reduced at the same time.

But on the 9th day of the strike, the court decides that it is an illegal strike.

The airport filed a damages lawsuit against the union for 5.2 million euros and 6.9 billion won in our money, claiming that 1,700 flights were not operated during the strike.

The 1st and 2nd trials raised their hands to the union.

The reason was that the union made a mistake in the course of the strike, but it was not enough to be seen as illegal.

, the federal labor court, the final judgment, overturned this decision.

At the time, it was decided that the strike was illegal and that the union should be responsible for the money as much as the damage suffered by the company was recognized.

There are also examples from other countries.

This one is more recent.

In July of last year, the highest court in Quebec, Canada, made a decision to pay 9.9 million Canadian dollars and 9 billion won of our money to the 'Quebec Construction Workers Federation'.

The incident happened in 2011.

The construction unions went on strike for two days on the news that laws were being pushed against them.

However, it did not stop at removing union members from the construction site, but also threatened some non-union members who came to work instead.

Later, the construction company and non-union members filed a lawsuit against the union, claiming that they had suffered losses because of this action, but the court accepted this position.

The assertion that other countries do not seek damages, and that there is none since the 1950s, is therefore far from the truth.

There is a reason for the story that foreign countries do not demand damages from the union.

Above all, 'illegal strike' itself is not common.

Let's take the example of Germany.

Compared to France, which has the most strikes in the OECD, Germany has about one-eighth of strikes.

This is called the 'Peacekeeping Duty'.

So there is a view that 'negotiation is peace, strike is discord'.

That's why there were fewer strikes, fewer illegal strikes, and fewer cases of actual damages.

However, if individual company unions strike while making demands that go beyond the agreement of the big framework, this strike becomes illegal.

Because the Frankfurt airport construction industry representatives made demands beyond the agreement, the court ruled it illegal and ordered compensation for damages.

In conclusion, it is different from the fact that "in principle, all strikes in Germany are not a problem under the criminal law", which the 'Union Act Revision Headquarters' claimed in the fact check posted earlier, and because illegal strikes are rare, there are cases of compensation for damages.

4. There is another reason why there are few cases of damages in foreign countries.

The main character of this film, Billy, is an 11-year-old boy living in a coal-mining town in the north of England.

One day he falls in love with ballet, but his father 'Jackie' stops him.

He thinks, like himself, that his son should become a miner.

But when he saw his son's talent, he dreamed of getting him into the Royal Ballet School in London.

But at the time, the mines were on strike, and his father was avidly involved, so he couldn't afford to go to London to take the test.

The troubled father eventually decides to leave his colleagues behind, or betray them, and board a bus that goes into a coal mine.

This coal mine union strike was a real event.

In 1984, then Prime Minister Thatcher closed 20 coal mines in northern England at once, and announced that 70 more would soon be closed.

As more than 20,000 people lost their jobs in an instant, 187,000 miners went into the largest strike in British history.

The government responds with super-strong suppression, reminiscent of the white bones in Korea in the 1980s.

The strike lasted a year, but Thatcher eventually won and the unions gave in.

And the coal mines, which once numbered up to 3,000, are now almost abandoned.

It is an incident that remains deeply traumatic to this day, to the extent that when Prime Minister Thatcher died, festivities were held throughout the coal mining town.

Even in the movie, a fierce strike scene continues, with mounted police swinging clubs and union members bleeding.

However, if you look at it all the way, you will tilt your head from the point of view of Koreans.

Despite fighting so fiercely,

union members do not physically block non-union workers from entering the mines to work.

There's a video on YouTube with just that part, so check it out.

Also, it could be possible to go into a coal mine and hold a sit-in to prevent work from happening, but we don't do that either.

In most foreign countries, these strikes do not prevent unions from occupying businesses or preventing others from entering.

In English, 'strike' is used synonymously with 'picketing'.

This is because the union's actions during a strike should be limited to 'holding a picket and protesting without going to work'.

Right now, nurses are on strike in England, and they do this.

Conversely, on the UK government website, it is a 'criminal act' to do this during a strike.

- Threatening or insulting passers-by while picketing

- Blocking cars or people from entering the workplace - Possessing a

- Police outside the business If anything prevents you from doing this

The fact that this act was selected and defined as a crime, on the contrary, contains the meaning that if this is violated, civil and criminal responsibility will be taken.

And the unions are also upholding the principles.

This is the reason why the strong miners' union of 'Billy Elliot' did not stop the occupation nor stop the non-union members even in the situation of extreme struggle.

Therefore, it is not that the law in foreign countries prohibits companies from claiming damages to unions, but the conclusion that compensation cases are rare because unions rarely engage in illegal activities, so it should be seen as more true.

The Yellow Envelope Act is no way, the union should continue to compensate for damages, I'm not trying to tell you these stories.

In Korea, the current non-regular unions have extremely limited means to get what they want.

Full-time unions are stipulated in the law so that companies cannot put in replacement workers even if there is a strike, so just standing with a picket like in the UK can be effective enough.

Also, in the past, the company claimed compensation for damages and accused it of obstruction of business, but in the past 10 years, most of the shackles were released as the court acquitted them.

So, even if you search for recent cases of demanding compensation from unions, most of them were 10 or 15 years ago, and this is why there are very few cases, especially against full-time unions.

However, temporary workers are different.

If you go on strike, the company can immediately bring in someone else.

It is also convenient to cut in such a way that the contract is not extended after the strike.

That's why Daewoo Shipbuilding's non-regular workers' union went into the dock to build ships and held a sit-in.

But the problem is that, no matter how desperate the situation is, these strikes are unlikely to be legal, either internationally or by domestic legal standards.