Unemployment fell by 33,500 people in November, to the lowest level since 2007, in full debate on fixed-discontinuous

Unemployment fell by 33,512 people in November to the lowest level for this month since 2007, figures that point to good market performance... 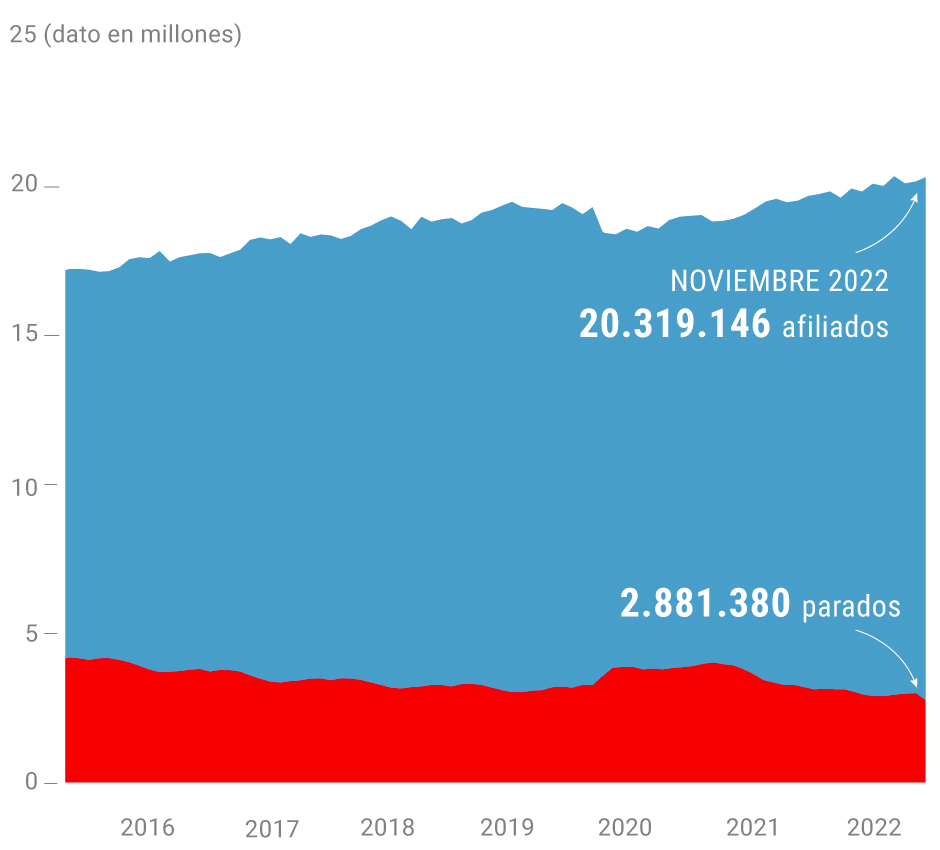 for this month since

, figures that point to the good performance of the labor market compared to economic growth -which is still below the levels prior to the pandemic-, but which are

due to the controversy about how permanent-intermittent workers without activity are classified.

in the entire historical series for this month, which leaves the number of

in the country at

, according to data released this Friday by the Public State Employment Service (

The problem is that

this statistic does not include

and who are in a

and receiving -in some cases-

The statistics do point out that there has been an

in the month of November

demand a new job being employed

and there are both fixed-discontinuous without activity, as well as those employed with a job who want to change jobs, such as those affected by a Temporary Employment Regulation File (ERTE).

Until the Job Seekers Statistics is published, it will be unknown how many of them are permanent-intermittently inactive.

) and later supported by different study services in the country, it is preferable to analyze the data from

This means that, in terms of registrations and withdrawals of workers from Social Security, last month was -with the exception of the pandemic years, 2020 and 2021-

as the Minister of Security had already announced. Social, José Luis Escrivá, in the middle of the month.

With this decrease in the number of workers, the total number of

in the country stands at

according to data also released today.

2,800 less self-employed workers and loss of 101,700 affiliates in the hospitality industry

The good performance of the affiliation is a sign that employment is resisting despite the economic environment of uncertainty, the slowdown in economic growth and high inflation.

The affiliation continues to pull

it cannot be said that the labor market is falling.

The registered unemployment data is always more difficult to interpret as a barometer of the situation. And it is true that this

more complicated with the

increase in fixed -discontinuous, a group that, due to the lack of work, is classified as inactive,"

Economic Situation , pointed out to this outlet this morning

Although in average terms the number of affiliates fell slightly, in some sectors important fluctuations are detected, such as in the hotel and

were lost (in this drop in affiliation all the fixed-discontinuous ones that have passed from the activity to inactivity).

On the contrary, the sector with the highest number of workers has been

, with the incorporation of

2,801 self-employed workers have been lost

in the month, while in the General Regime there has been a

that has been offset by the