The local markets witnessed offers and discounts of up to 70% on several commodities and products on the occasion of the 51st Union Day of the UAE. 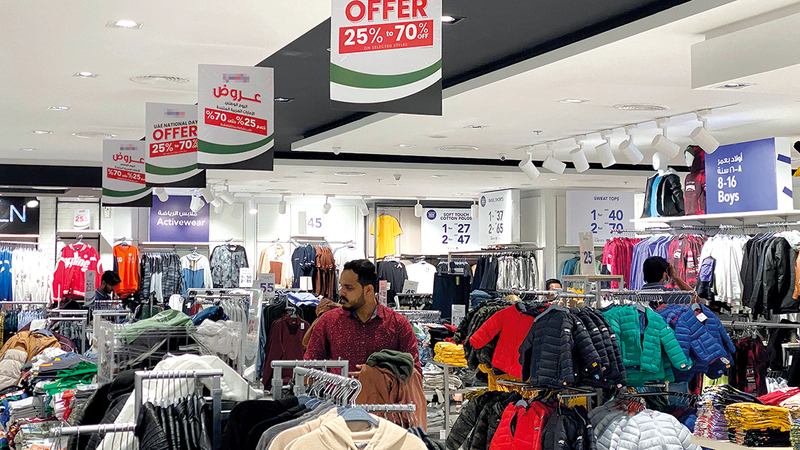 Local markets witnessed offers and discounts of up to 70% on several commodities and products on the occasion of the 51st Union Day of the UAE.

A tour of "Emirates Today" in each of the markets of Dubai, Abu Dhabi, Sharjah and Ajman showed that shops, outlets, cooperatives and restaurants competed in offering offers, which included cash back and free vouchers in the event of spending specific amounts, in addition to special initiatives through fixed-rate discounts on Certain food and consumer goods.

The discounts included commodities that are popular with consumers, most notably clothes, bags, shoes, furniture and electronics.

Officials of shops and sales outlets told Emirates Today that the increased competition in the country's markets has stimulated many outlets to expand offers, expecting that the markets will witness a great demand for discounts, coinciding with the Martyr's Day holiday and the Federation Day.

In detail, sales outlets and cooperatives in Dubai, Sharjah and Ajman launched discounts on the occasion of the 51st Union Day of the UAE, at rates ranging between 30 and 60%.

Dr. Suhail Al Bastaki, Director of Marketing at the Union Coop, told Emirates Today that the cooperative recently offered expanded discounts on the occasion of Union Day, through campaigns that included various initiatives.

He explained that the discounts amounted to 60% on about 1,000 commodities in the various outlets of the cooperative in the period from November 25 to December 4.

Al-Bastaki added that, in addition to that, the cooperative launched a special initiative that includes choosing 51 commodities from among the most demanded by consumers, whether food or non-food, and including them with fixed discounts of 51%, from November 30 to December 4.

In turn, the general manager of the Ajman Markets Cooperative Society, Sami Muhammad Shaaban, said that the cooperative offered, from the 29th to the 4th of December, discounts on the occasion of the Union Day.

He added that the offers included a special initiative for a fixed discount of 51% on fresh vegetables, fruits and food products, in addition to offers of varying discounts of up to 60% on food products such as rice, canned foods, edible oils, etc., as well as other non-food products.

For his part, the official spokesman for the “Aswaaq Group” centers affiliated with the “Investments Corporation of Dubai”, Abdul Hameed Al Khashabi, stated that the group’s outlets launched campaigns for early discounts on the occasion of the celebration of the Union Day, which began on November 25 and continues until the end of the Martyr’s Day and Union Day holidays, explaining They include discounts of varying rates exceeding 30% on food and non-food products.

He said that the markets are witnessing competitive manifestations between sales outlets in expanding the offers of discounts, especially with the expected growth of consumer demand during the Union Day holiday period to purchase various supplies, especially products for going out to parks and beaches with the improvement of the weather.

In the same context, Dibal Shron, sales director of a retail chain in Sharjah, said that the offers offered on the occasion of the Union Day were not limited to food products only, but were expanded to include electronic products, travel bags, gifts, perfumes, watches, shoes and clothes.

He added that there is a remarkable competition between the outlets in offering discounts, especially with the expectation that the demand for outlets will increase with the relatively long Union Day holiday.

In Abu Dhabi, consumer Ihsan Al Shamsi told Emirates Today that commercial stores offered discounts on the occasion of the country's 51st Union Day, at rates ranging between 25 and 70%, as well as special offers for cash back if spending more than 200 dirhams.

She added that the discounts included many commodities that are popular with consumers, most notably clothes, bags and shoes, in addition to furniture and decoration supplies, as well as cosmetics, body care products, and others.

The consumer, Muhammad Jalal, confirmed that a number of shops offered discounts on certain commodities, most of which ranged between 25 and 50%, in addition to purchase offers, such as (buying one product and getting the other for free), or (buying two products and getting the third for free), in addition to obtaining Free vouchers in case of spending certain amounts.

He explained that the discounts included multiple commodities, including clothing, electronics, perfumes and household items.

And the consumer, Mahmoud Nabil, stated that, in addition to the discounts offered by the shops at rates of up to 70%, with obtaining more discounts in the event of using certain discount codes, restaurants and cafes also offered discounts on the occasion of the Union Day, at rates of up to 25% on some of their products.

He said that several companies have offered their products for a specific period of time with new covers designed in the colors of the UAE flag.

For his part, the official in one of the shopping centers in Abu Dhabi, Samir Asaad, said that there is a demand on the part of shops to participate in the special discounts on the occasion of the Union Day, indicating that some of the discounts will continue until the fourth of December, while other shops preferred to extend them until the end of next week.

And an official in another shopping center, Tawfiq Abboud, expected that there would be a large demand from consumers for the discounts coinciding with the Martyr’s Day holiday and the Union Day, which lasts for four days, in addition to organizing some celebrations in the commercial centers on the occasion of the Union Day, which raised the rates of visitor demand to those centers. .

Ibrahim Al-Bahr, director of Al-Bahr Consulting and an expert in retail affairs, said that the intensity of offers on the market indicates the extent of the intensity of competition between sales outlets, especially with the increase in the shares of medium-sized outlets in the retail trade sector and the remarkable expansion of its branches in Dubai, Sharjah and Ajman.