Finally, Dubai Chambers organized an expanded meeting that included ambassadors and members of the diplomatic corps working in the country, as part of its annual "Diplomatic Corps Dinner", which brought together more than 150 ambassadors, consuls general and commercial attaches in the country, at the Bulgari Resort and Hotel. Dubai». 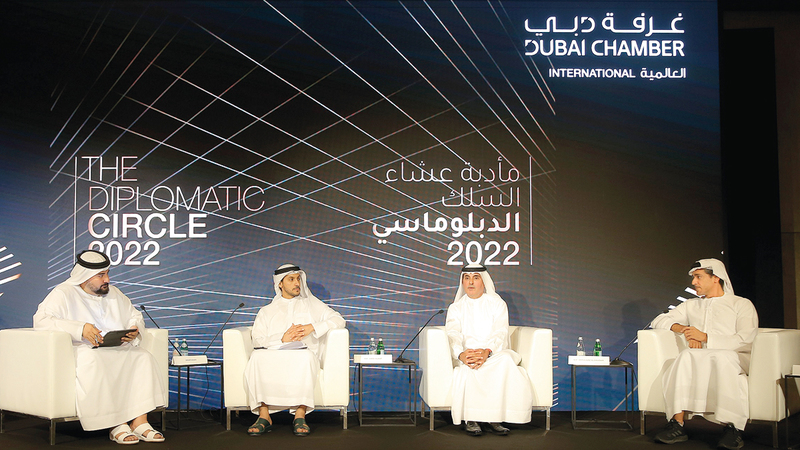 Finally, Dubai Chambers organized an extensive meeting that included ambassadors and members of the diplomatic corps working in the country, as part of its annual "Diplomatic Corps Dinner", which brought together more than 150 ambassadors, consuls general and commercial attachés in the country, at the Bulgari Resort and Hotel. Dubai".

In a speech during the event, the Chairman of the Board of Directors of Dubai Chambers, Abdulaziz Al Ghurair, revealed plans to form new business councils, restructure, develop and expand the role of the councils, in a way that enhances the economic partnership between Dubai and these countries, and contributes to the development of bilateral trade and investment relations between the two communities. business in Dubai and their countries.

Al Ghurair called on those present to cooperate to form business councils representing investors from their countries in Dubai, pointing also to plans to organize an annual forum, starting next year, that brings together business councils and commercial representation offices in the country, to be a platform for exchanging visions and ideas, encouraging joint dialogue, and involving them in Efforts to stimulate a business environment, launch strategic initiatives of the Chambers, and open new channels of interaction, communication and partnership, to serve the private sector and business communities in Dubai and these countries.

Al Ghurair said: “We aim to increase the number of business councils, and ensure their effectiveness, by setting key performance indicators for these councils, as these councils will cover markets of strategic importance to Dubai, supporting us in our external expansion efforts in Africa, Latin America and the Middle East, and attracting investments from them.

These councils will also benefit from our external offices in providing growth opportunities for their members.”

Al Ghurair stressed that the goal is to form new business councils for countries that are not currently represented in the business councils system, pointing out that these councils will be concerned with developing relations, ties and joint economic partnerships, appreciating the important role played by the diplomatic corps in enhancing economic cooperation between Dubai and their countries.

Al Ghurair referred to the establishment of a specialized sector in supporting the interests of the business community within the Dubai Chamber of Commerce, whose tasks include enhancing the private sector's contribution to the development of the legal and legislative system, and providing support in the field of policies that stimulate business growth.

Al Ghurair presented to the audience the efforts to support family businesses, speaking about the imminent launch of the "Dubai Center for Family Businesses", to enhance the competitiveness of family businesses in Dubai and ensure their sustainability and continuity.

He also discussed the efforts of the Dubai Chamber of Digital Economy in strengthening the digital economy system in Dubai, and its goals of attracting 300 emerging digital companies to the emirate by 2024, attracting "unicorn" companies, and supporting 20 local digital companies in external expansion efforts.

Al Ghurair indicated that the Dubai International Chamber is committed to supporting the external expansion of companies operating in the country, as it intends to open 50 foreign representative offices in 30 markets of strategic importance to the Emirate of Dubai during the next few years, and to launch new programs and initiatives to support the expansion of companies from the UAE abroad.

He said, "These efforts are focused on supporting Dubai's plan for foreign trade, which was approved by His Highness Sheikh Mohammed bin Rashid Al Maktoum, Vice President and Prime Minister of the UAE and Ruler of Dubai, by raising the value of Dubai's foreign trade to two trillion dirhams by 2026, and implementing the strategic priorities of the Dubai government." ».

For their part, members of the diplomatic corps praised the efforts of Dubai Chambers in activating channels of dialogue, supporting investors, and helping companies in the UAE to expand abroad, appreciating this strategic partnership that serves investors from their countries.

In his speech, the Assistant Undersecretary for International Trade Affairs at the Ministry of Economy, Juma Mohammed Al-Kayt, referred to the country's focus on building a modern economy that would be a global center for foreign trade and investment, in conjunction with the country's endeavor to double the size of its national economy from 1.4 trillion dirhams to three trillion dirhams by 2018. 2030.

He pointed out that the UAE has signed comprehensive economic partnership agreements with its main partners in the world, and is in the process of signing new agreements to accelerate trade exchange, strengthen the supply and distribution chain, provide investment opportunities, and promote innovation.

He added, “We are continuing our efforts to ensure the position of the UAE as a destination for attracting foreign direct investment, especially with the introduction of the updated visa system, such as golden residency visas and green residency visas, in addition to the amended laws, such as the Commercial Companies Law and labor rules.

We are also introducing new legislation, such as the Family Business Law, to ensure the growth and sustainability of family businesses.”

He explained that "the sectors of health care, education, agricultural technologies, food production, financial technologies, and banking services, in addition to the advanced technology sectors, are the main sectors for attracting foreign direct investment."