Sánchez welcomes 2,500 million from Amazon after his fiscal nod to streaming: "The benefits are already palpable"

Pedro Sánchez reaffirms his invitation to Spain addressed to the big US technology companies. While PSOE and Unidas Podemos pave the way to raise the limits... 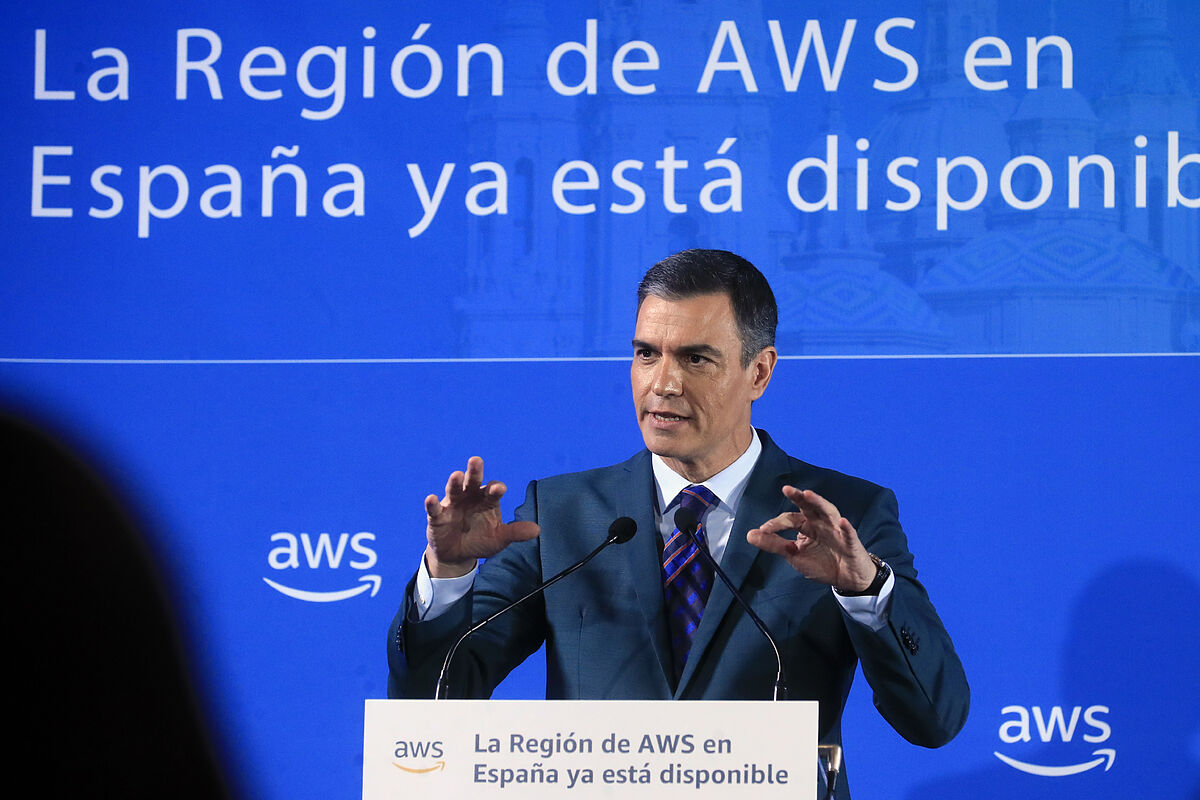 Pedro Sánchez reaffirms his invitation to Spain addressed to the big US technology companies.

While PSOE and Unidas Podemos pave the way to raise the current ceilings on deductions from large audiovisual producers, such as Netflix, HBO Max or Amazon Prime Video, the president has welcomed "the already tangible benefits" that the inauguration of the new facilities in Aragon of AWS, Amazon's thriving cloud infrastructure business.

"The cloud is an ally to improve efficiency and also productivity", has valued the President of the Government.

on this landing forged at the Davos Summit in 2020.

The Government intensifies its attempt to attract large North American companies in the digital field -this same month it was announced that Cisco will locate its new microchip design center in Barcelona-.

As EL MUNDO has revealed this Thursday, a modification of the two parties of the coalition Executive, introduced in the bill to create a new tax on banking and electricity, will serve to unblock the incentives for large audiovisual productions, which would raise its limit of 10 million euros per season to 10 million for just one episode.

will be able to enjoy this relaxation of tax conditions.

From AWS, its general director Miguel Álava has stated that this "is an investment of 2,500 million euros over 10 years."

Actually, Amazon already announced last week this opening in Spain, that of its eighth infrastructure region within Europe.

The cloud arm of the e-commerce giant, Amazon Web Services (AWS), will

, as the Seattle-based US company forecasts.

AWS estimates that the new Region will add

€1.8 billion to Spain's GDP over the next decade

, a contribution that includes a €150,000 fund for the Aragonese community, earmarked for local groups, schools and organizations.

Aragon, a region governed by the socialist Javier Lambán, presents different geographical characteristics in its favor: natural resources for the generation of electricity essential for data centers, a low population density that has enabled modest costs for the acquisition of land and also a located halfway between Madrid and Barcelona, ​​with connection to the rest of the continent via the Pyrenees.

Lambán has underlined the Aragonese potential to generate renewable energy and the "growing investor interest" that this Community has been attracting thanks to its energy potential.

Of course, finding profiles with knowledge of cloud computing is not easy today, neither in Aragon;

Aragon, among the eight European nodes

recalled that the start of the talks for the arrival of this project dates back to April 2018, although it was forged in January 2020, when Sánchez met in Davos with Andy Jassy, ​​head of Amazon Web Services (AWS ).

"I begged [Sánchez] to be interested in this investment, he did it and for me

there has never been a more important Davos summit than that

AWS Regions are made up of Availability Zones that locate infrastructure in distinct and separate geographic locations, to ensure system security.

These three centers in Aragon are made available to AWS customers in Spain, including government departments (such as the Ministry of Inclusion, Social Security and Migration), public centers (Hospital Clínic de Barcelona), related companies to the State (Renfe) and of course private companies (for example BBVA, Cabify, Meliá and Repsol).

Also startups, entrepreneurs and individuals can benefit from this technology.

In other words, a job can be carried out without having to host all the necessary tools nearby or also receive online traffic from data centers, for example a YouTube (Google) video or a Netflix series that is replicated on that data center.

, followed by Azure (Microsoft) and Google Cloud, which just today announced that it will acquire 149 megawatts of electricity from solar sources from a new photovoltaic park located in Toro, Zamora , to feed its region located in Madrid, so that in 2025 this headquarters can operate with 90% carbon-free energy.