It's friendly economy time. Reporter Han Ji-yeon is here today. After a lot of rain recently, vegetable prices have risen a lot? Yes, because of the sluggish crop, the price has already jumped a lot. 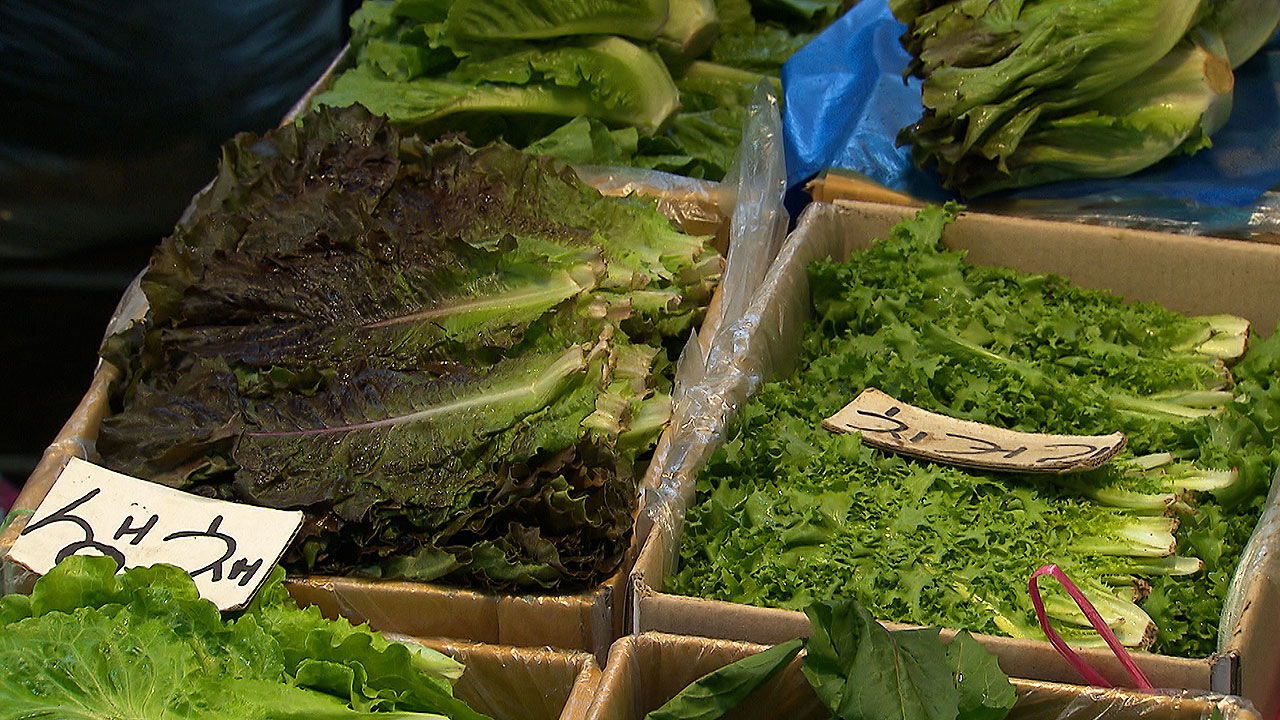 After a lot of rain recently, vegetable prices have risen a lot?

Yes, because of the sluggish crop, the price has already jumped a lot.

With the addition of water damage, it became more expensive.

Restaurants are not able to provide wrap vegetables such as lettuce sesame leaves at all. According to the Seoul Agro-Fisheries & Food Corporation, 4 kg of red lettuce rose 69% a week at Garak Market in Songpa, Seoul on the 20th and was auctioned at 111,500 won. That's a 164% increase compared to a year ago.

Sesame leaves also traded at a price that increased by 38% compared to a year ago last weekend and 21% in a week, and Chinese cabbage rose 40% from a week ago.

Due to the flood damage in the Chungcheong area, the amount of Cheongyang pepper rose by 30% in a week, which is a threefold increase from a year ago.

Considering the recovery time from flood damage, there is an analysis that vegetable prices will continue to rise until Chuseok.

Is there an event where you can eat cheap food at a restaurant?

Yes, it is until the 7th of next month, and you can buy and eat main menu items at a 30% discount at 160 Korean restaurants across the country designated as 'Safe Restaurant'.

This 'Korean Food Discount Week' event was planned to promote Korean restaurants and stabilize prices, but the cost of eating out has risen too much these days.

You should check which restaurant you can meet at a reasonable price.

When I searched the Seoul area, I found that the menu was very diverse, such as jjokgalbi, oyster soup, and chueotang budaejjigae.

It's scary to have one meal for lunch these days to the extent that the word lunchflation comes up.

I think it would be good to take full advantage of this event.

Chuseok is a little early this year.

It must be Chuseok soon. What items have sold the most for Chuseok gifts this year?

Yes, originally, gulbi or steamed ribs are the things that go on the ancestral table.

In the past, there were a lot of gifts mainly for these kinds of things, but these days, lobster and Korean beef for roasting are more and more present.

It is an analysis that young people with westernized tastes are leading the holiday atmosphere at home as they reach their 30s and 40s.

During the Chuseok gift reservation period at the department store, the sales of Korean beef for grilled beef increased by 52%, which was three times higher than that for steamed ribs of Korean beef by 17%.

If this trend continues, it is expected that the proportion of Korean beef sold for roasting will exceed 40% for the first time in history.

And it's a staple in Western cuisine.

Lobster and shrimp sales increased by 45%, far exceeding that of oysters, a representative holiday gift.

Also, apples and pears are usually eaten during Chuseok.

I'm sure there are a lot of people who are worried like this, but they say that free repairs are going on from yesterday, but what about them?

Yes, I brought it out for those who don't know it yet. The target model is the Bespoke Grande AI product produced from September last year to May this year.

Over 91,000 units have been sold so far, and there have been many reports of accidents with the glass door of the washing machine shattering like that.

When the glass is attached to the door, foreign matter enters and the adhesive strength weakens, causing the glass to fall.

The model will be repaired free of charge until November 30th. If you apply to the Samsung Electronics call center, an engineer will visit you and replace the glass door.