For three days: Gazprom announced the suspension of the Nord Stream

The Nord Stream gas pipeline will suspend operation for three days from August 31 to carry out scheduled maintenance at the only operating unit at the Portovaya station. According to Gazprom, according to Siemens standards, routine maintenance of equipment must be performed after every 1,000 hours of operation. After that, the highway will return to the pumping rate of 33 million cubic meters. m per day. Against the backdrop of the situation with Siemens turbines and anti-Russian sanctions, the gas pipeline is only able to operate at 20% of its planned capacity. 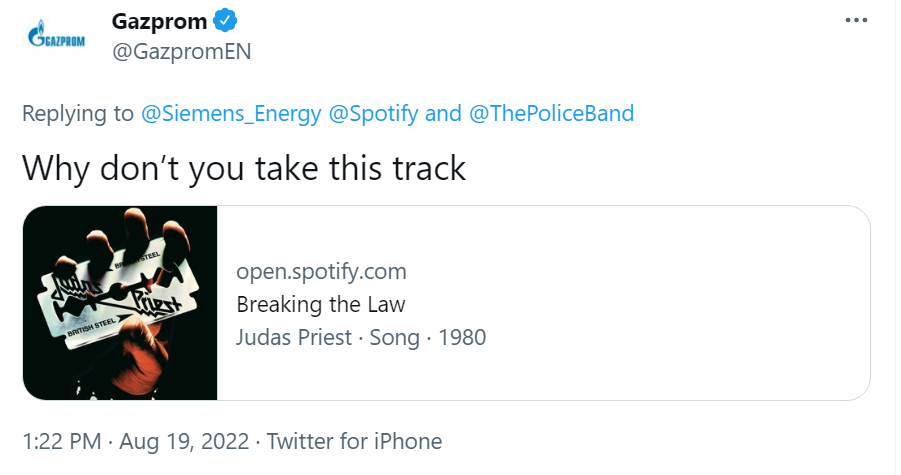 The only working gas compressor unit Trent 60 at the Portovaya compressor station, which ensures the operation of the Nord Stream, will be stopped on August 31 for three days for scheduled maintenance, Gazprom said.

"A set of routine maintenance, in accordance with the current maintenance contract, will be carried out jointly with Siemens specialists," the company's press service noted.

They reminded that, in accordance with the technical documentation of Siemens, every 1 thousand hours (about once every 42 days) it is necessary to carry out maintenance of the unit.

The range of works includes cleaning the body and its inspection for cracks or deformations, inspection of oil supply systems and removal of combustion gases for leaks, checking the operation of safety valves, adjusting the air flow control system and a number of other procedures.

Upon completion of work and the absence of technical malfunctions of the unit, gas transportation will be restored to the level of 33 million cubic meters.

Against the background of this message, stock prices for gas in Europe for the first time since March rose above $2.7 thousand. The increase was more than 8%.

m. In June, this figure began to decline against the background of the situation with the repair of Siemens turbines in the context of anti-Russian sanctions from Western countries.

The units of this manufacturer operate at the Portovaya compressor station, which is located in the Leningrad Region and is the entry point to Nord Stream.

Due to the shutdown of part of the turbines, the daily capacity of the line in mid-June decreased to 67 million cubic meters.

m. It is to this indicator that Gazprom plans to return after maintenance.

Meanwhile, in early August, the company said that anti-Russian sanctions hinder the resolution of the situation that has developed around Siemens turbines.

In particular, Gazprom noted that the engine sent for repair to Canada was delivered to Germany instead of Russia without the consent of the company, which does not comply with the terms of the contract.

As the company added, if the engine is transported to Russia, there is a risk that the Canadian authorities may consider this a violation of sanctions or circumvention of the conditions of the issued permit.

In addition, the very delivery of a turbine from Canada to Germany may also be subject to restrictions, since the Russian Federation is subject to a ban on the sale, supply, transfer or export of gas turbine engines, regardless of whether these goods are produced in the EU.

“The turbine is still not where it should be”

Against the backdrop of a difficult situation, Siemens Energy demonstrated an ironic approach to the problem.

On August 19, a post appeared on the company's Twitter account calling for the creation of a Spotify playlist for the Nord Stream turbine, which is located in Germany and is alone.

As the first song, it was proposed to use the song So Lonely (“So Lonely”) by The Police.

Gazprom did not leave the publication unanswered.

Siemens Energy subsequently deleted the post suggesting a playlist, noting that the post provoked "controversial discussion" and that the tone and subject matter of the tweet was deemed inappropriate by some.

Meanwhile, the deputy chairman of the Bundestag, a member of the ruling coalition from the Free Democratic Party of Germany, Wolfgang Kubiki called for the commissioning of Nord Stream 2 as soon as possible.

In an interview with the editorial association RedaktionsNetzwerk Deutschland, the politician explained that the launch of the pipeline would fill Germany's gas storage facilities for the winter.

According to him, Berlin has “no reasonable reason not to open Nord Stream 2”.

However, Kubicki believes that the pipeline should be closed when Germany's gas storage facilities are full.

Commenting on the initiative, Wolfgang Buechner, deputy spokesman for the German government, said that the resumption of the certification process for Nord Stream 2 was not yet discussed.

At the end of December 2021, Gazprom CEO Alexei Miller reported to Vladimir Putin on the full readiness for the commissioning of the Nord Stream 2 pipeline.

However, on February 22, 2022, German Chancellor Olaf Scholz announced that he had instructed to suspend the certification of the gas pipeline.

Later, in July, the President of Russia noted that, as a result of communication with the leadership of Germany and Gazprom, it was decided to redirect half of the volume of gas previously reserved for Nord Stream 2 to domestic consumption and processing.