Turkey/Israel: "These are two regional powers that have no interest in entering into conflict"

Israel and Turkey announced on Wednesday August 17 the full restoration of their diplomatic relations and the return of ambassadors to the two countries. It's the end of more than 10 years of estrangement.… 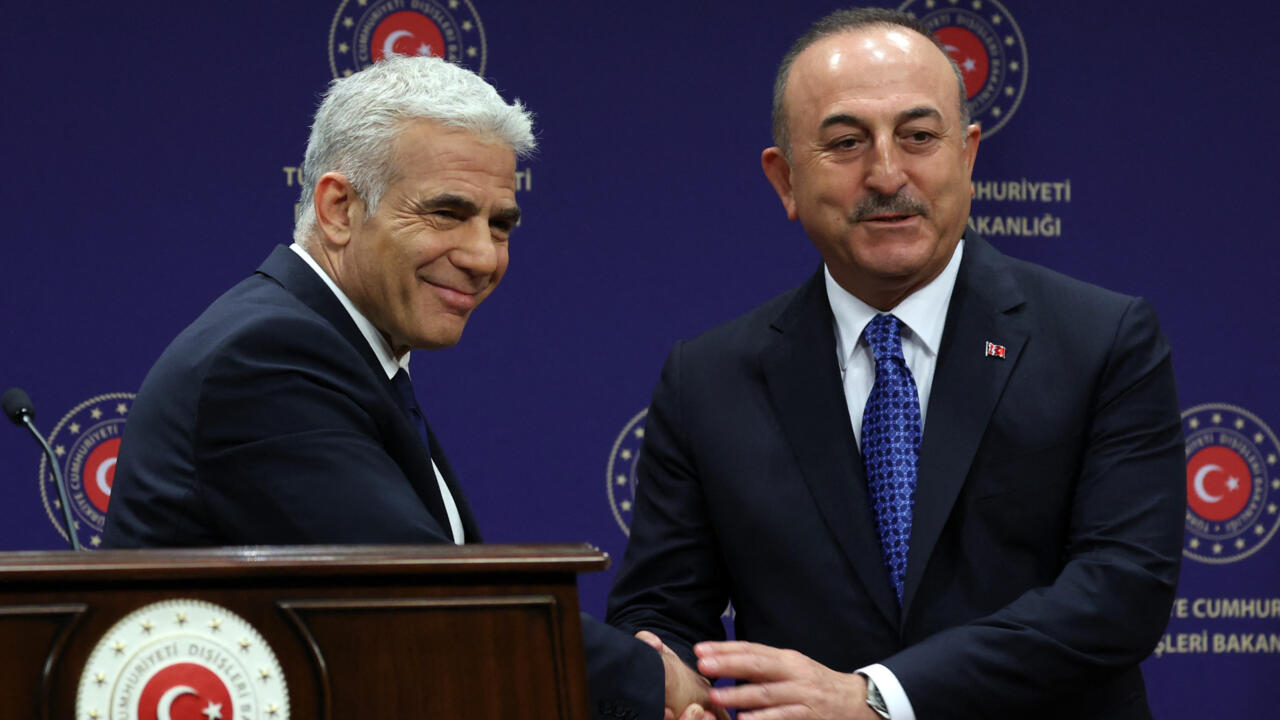 Turkey/Israel: "These are two regional powers that have no interest in entering into conflict"

Israeli Foreign Minister Yair Lapid (L) and Turkish Foreign Minister Mevlut Cavusoglu (R) shake hands during a news conference in Ankara, Turkey, June 23, 2022. Israel and Turkey have announced Wednesday, August 17, 2022 the full restoration of their diplomatic relations and the return of ambassadors to both countries.

Israel and Turkey announced on Wednesday August 17 the full restoration of their diplomatic relations and the return of ambassadors to the two countries.

It's the end of more than 10 years of estrangement.

In recent months, the exchanges had multiplied.

Interview with Dorothée Schmid, head of the Middle East program at IFRI (French Institute for International Relations) and specialist in Turkey.

RFI: Why this reconciliation now?

: It is a reconciliation process that has been going on for quite some time.

After the big quarrel of 2010 following the Mavi Marmara affair [the Turkish ship targeted by Israel off the coast of Gaza, nine Turkish militants had been killed, editor's note], we had the reconciliation initiative under Barack Obama and since then, we have countries that “smell each other”, I would say, regionally.

These are two regional powers that have no interest in entering into conflict.

Israelis are very embarrassed by Turkey's support for the Palestinian cause.

The Turks have stakes in Syria and Israel is a significant neighboring player in the stabilization of Syria.

And you know that the Turks would like to launch a new military operation in Syria.

So, we can imagine that there are quite a few regional issues to be discussed between these two countries,

To read also The Israeli president on a state visit to Turkey, a first in fourteen years

Precisely, we know that Turkey is in the midst of an economic crisis with high inflation.

Could it have played in the fact of completely renewing diplomatic relations with Israel?

I think that here, we have rather the indirect result of the Abraham agreements.

Turkey is finally following in the footsteps

of the Gulf countries

in their reconciliation with Israel.

Turkey reconciled itself with the United Arab Emirates with whom it was at loggerheads for some time.

So, we have rather a kind of positive regional evolution vis-à-vis Israel.

And I don't think we should blame the economic crisis in Turkey for all of the country's diplomatic advances either.

Erdogan's (Turkish President Recep Tayyip Erdogan's) goal is to show that Turkey is a central, stabilizing power, a sort of positive force in its regional environment and beyond.

And what about energy cooperation, notably on gas, between Israel and Turkey?

It's an old fantasy.

It is not at all clear that this will be achieved because the exploitation of gas in the Eastern Mediterranean depends both on the gas market, on the ability of countries to agree on their maritime limits, this which is not at all obvious since Israel is already in conflict with Lebanon.

The Turks are very agitated around the borders of Cyprus and are in conflict with Greece on maritime delimitations.

And then there is a financial question: to what extent would very large investments such as the construction of pipes be profitable in the long term?

Obviously, the Ukrainian crisis gives a slightly different visibility to this question.

But I have my doubts that gas in the eastern Mediterranean can be extracted from the region and exported only following the Russian-Ukrainian crisis.

On the other hand, the Turks need investments more broadly and, thanks to the normalization with Israel, they can expect spillovers.

With the restoration of diplomatic relations with Israel, Turkey nevertheless asserts that it will "continue to defend" the Palestinians

What should we think ?

There is indeed a big contradiction here.

The Turks, for about ten years, have really taken the Palestinian file in hand on the international scene, to the detriment of the Arab countries which have turned away from it.

And the Turks are accused by Israel of having very close relations with Hamas.

This means that we will certainly have security cooperation that will be put in place and the possibility of a return of Hamas personalities to Israel is not impossible.

But the Turks are a little embarrassed at the corners.

Foreign Minister Mevlüt Cavusoglu hastened to say that it wouldn't change anything for the Palestinian cause, but it's a bit difficult to swallow this announcement of an exchange of ambassadors with Israel, at a time when we have new clashes in Gaza.

To read also: After six years of rupture, Turkey and Israel are finally reconciled