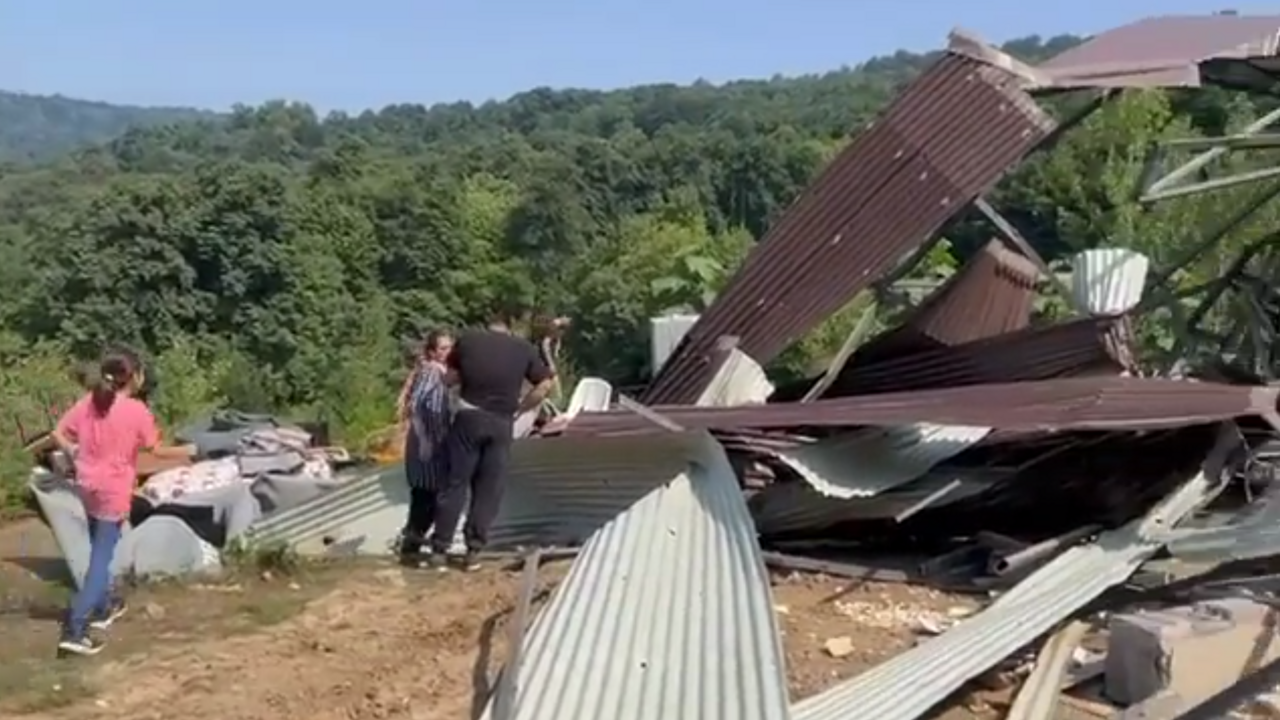 Screen capture from a video of destruction in Roshan Kouh, relayed by the Baha'i International Community.

Destroyed houses, arbitrary imprisonments, defamation campaigns, the Tehran regime is unleashed once again against its favorite scapegoats, but the population is not fooled.

There would have been at least 125 facts of this type between July 31 and August 10.

All target the Baha'i religious minority in Iran, the largest non-Muslim community in the country, which numbers more than 300,000 people in the country.

," sighs Diane Alai, representative of the Baha'i international community to the United Nations in Geneva.

More than 52 searches were carried out as of July 31, and arrests the following week.

(link in Persian) took place on August 2 in the north of the country, in Roshan Kouh, a small village inhabited mainly by Baha'is in the province of Mazandaran.

According to Diane Alai, “

200 agents were instructed by the government or local authorities to block all access to this village and began to destroy the houses which belonged to the Baha'is.

By the end of that day, there were six homes destroyed and 20 hectares of Baha'i property confiscated

Numbers increasing by the hour.

On August 7, two women and a man, Mahvash Sabet, Fariba Kamalabadi and Afif Naimi were arrested in Tehran and Karaj, accused of being Baha'i leaders.

They are not leaders in the religious sense of the term, it is just that there is a community, so on the social level, there must be an organization.

That's why they were arrested again, when they have already spent ten years in prison

, ”explains Karim Lahidji, president of the Iranian League for Human Rights in Iran, based in Paris.

The three risk another ten years in prison, "

for having illegally administered the affairs of the Baha'is"

Since 1979 and the Islamic revolution, regular waves of repression have descended on the believers of this monotheistic religion born less than two centuries ago, depending on the internal political and economic context.

Whenever there is tension, and this is currently the case in Iranian society, with inflation of more than 50

%, with the high cost of living, with the lack of water due to the drought…, we have to find scapegoats on the political and religious levels

: they are the Baha'is

Religiously, the Baha'is are not recognized in Iran.

However, according to the Koran, Muhammad was the last prophet.

The Iranian theocratic power cannot therefore tolerate a religion that goes against the Koran, which moreover promotes gender equality and tolerance towards all, without distinction of creed, ethnicity or skin color.

A view of the terraced gardens of the Baha'i World Center in the port city of Haifa, October 24, 2007. AFP - JACK GUEZ

Politically, then, because the Baha'i pilgrimage sites are now located on Israeli territory in

A coincidence of history: this was not the case at the beginning of the Baha'i religion, Israel having been born only in 1948. "

It is a pretext for the Iranian authorities to accuse an old woman, who may not even have left her village to be a spy for Israel, and to destroy her house

The Iranian population is not very receptive to his accusations against the Baha'is, explain Karim Lahidji and Diane Alai.

On the one hand, the committed civil society, of course, which denounces the incessant attacks against the Baha'is.

in support of Baha'is and some even from inside Iran.

», explains the representative of the Baha'i international community to the United Nations.

Some Diaspora personalities consistently support the Baha'i community, such as Reza Pahlavi.

From its first days in 1979, the regime in #Iran has libeled Iranian #Bahais as spies, confiscated their property, destroyed their homes and businesses, denied them education, jailed and executed them, and razed their graves.

This happens every day.

The world must finally act.

And these denunciations are not limited to defenders of human rights and personalities of the diaspora.

Many Iranians denounce attacks on Baha'is, some of whom are neighbors and friends.

There is a whole wave of support from Iranians who are not necessarily human rights defenders, but who know the Baha'is who simply say on the networks

I, my Baha'i neighbor is someone very good, I don't see why we come to bother them"

Indeed, in a letter, residents of Roshan Kouh and the surrounding villages testify that the Baha'is have practiced agriculture there for generations, more than 100 years, and that they have had their lands illegally expropriated.

Inhabitants of #Roshankouh & surrounding villages testify that the #Bahais have been farming there for generations - over 100 years - their lands were expropriated by the Natural Resources Department of Sari on 24 Oct 2020 without knowledge of the owners.https://t. co/gnMVlgaBn2 pic.twitter.com/3QmIp0mUiT

Anyway, for Karim Lahidji, the majority of Iranians are hostile to the regime.

% of Iranians considered to be still loyal to the regime, members of the army, of political organizations, but I'm talking about the others, who live in the capital, the big cities or in the villages, which are very wary of official media and government propaganda

Government authorities in the United States, United Kingdom, Canada, Luxembourg, Brazil, and even Germany have condemned the attacks on the Baha'is.

More than thirty organizations and human rights defenders have also

to President Joe Biden asking him to condemn these persecutions.