The UAE consolidated its gains in the tourism sector during the “Covid-19” pandemic, to be ranked fourth in the world in terms of international tourism revenues during 2021, according to preliminary data revealed by the United Nations World Tourism Organization. 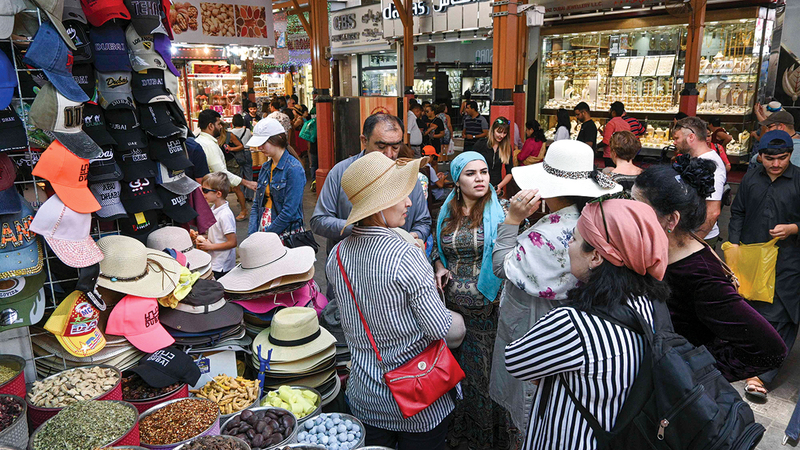 «World Tourism»: 126 billion dirhams, the expenditures of international visitors to the UAE in 2021

Dubai received 3.97 million international visitors during the first quarter of this year.

The UAE consolidated its gains in the tourism sector during the “Covid-19” pandemic, to be ranked fourth in the world in terms of international tourism revenues during 2021, according to preliminary data revealed by the United Nations World Tourism Organization.

The data showed that the volume of revenues recorded a growth of about 40% during the past year 2021, compared to the previous year, in which the volume of revenues amounted to 24.6 billion dollars (about 90 billion dirhams), noting that the average expenditure of an international visitor to the UAE exceeded 3,400 dollars ( About 12,485 dirhams), compared to an average of 1,350 dollars (about 4,957 dirhams) globally.

During the past year, the UAE advanced seven places on the index of the largest international markets in terms of tourism revenues, compared to levels before the Corona Virus (Covid-19) pandemic, from 11th place in 2019 to 4th place in 2021.

Globally, the United States ranked first in tourism revenues, recording about $70 billion, followed by France, which recorded $40.8 billion, then Spain with $34.5 billion, and the UAE in fourth place, recording $34.4 billion.

The sector’s results for the year 2021, according to the Ministry of Economy, showed that hotel establishments in the country attracted 19 million hotel guests, with a growth of more than 29% compared to the number of guests for the year 2020, while domestic tourism accounted for 58% of the total number of guests, compared to 42% for guests from outside the country. .

In 2021, hotel establishments achieved revenues of 28 billion dirhams, achieving a growth of up to 70% compared to 2020.

In addition, during the past year 2021, more than 75 million hotel nights were booked, an increase of 42% compared to 2020, while the hotel occupancy rate reached 67%, knowing that this percentage represents one of the highest rates achieved in the world's leading tourist destinations.

According to the Department of Economy and Tourism in Dubai, last year, the emirate received 7.28 million international visitors, an increase of 32% compared to the same period in 2020.

During the first quarter of this year 2022, Dubai received 3.97 million visitors from around the world, achieving an increase of more than 214% compared to the same period in 2021, which recorded 1.27 million visitors, which confirms the emirate's position as a preferred destination for international visitors.

The tourism sector in Dubai witnessed, during the first three months of 2022, a strong activity that made the hotel performance indicators almost equal to the rates before the “Covid-19” pandemic for the same period in 2019, while the average hotel occupancy rate reached 82%, exceeding its counterpart in Major destinations on the world tourism map.

International tourism, according to the latest global tourism indicators issued by the World Tourism Organization, witnessed a strong recovery in the first five months of 2022, with the registration of about 250 million international tourists, compared to 77 million tourists from January to May 2021.

The organization explained that in terms of international tourism revenues in destinations, there are an increasing number of countries that have fully recovered compared to their levels before the outbreak of the pandemic.