The richest man in Qinghai was sentenced and fined 2 million yuan. What happened? 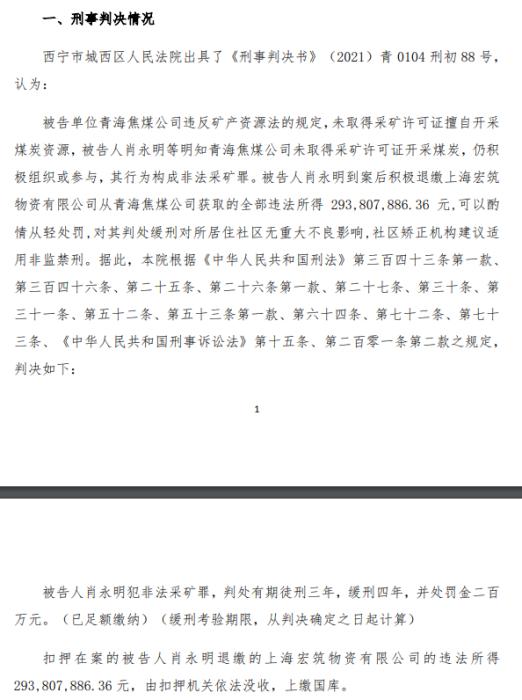 richest man in Qinghai was sentenced and fined 2 million yuan. What happened?

Recently, a criminal verdict brought Xiao Yongming, the former richest man in Qinghai, back into the public eye.

On the evening of June 30, Zangge Mining issued an announcement on the trial results of the case involving the actual controller.

The announcement shows that the company recently received the "Criminal Judgment" (2021) Qing 0104 Xing Chu No. 88 provided by the actual controller Xiao Yongming, and learned that the case involved has been tried by the People's Court of Chengxi District, Xining City, and a criminal judgment has been made.

The "Criminal Judgment" shows that the defendant Qinghai Coking Coal Company violated the provisions of the Mineral Resources Law and exploited coal resources without obtaining a mining license. , whose behavior constitutes the crime of illegal mining.

The court held that the defendant Xiao Yongming actively returned 293,807,886.36 yuan of illegal income obtained by Shanghai Hongzhu Materials Co., Ltd. from Qinghai Coking Coal Company after his arrival in the case, and he could be given a lighter punishment as appropriate, and his suspended sentence had no major adverse impact on the community where he lived. Community corrections agencies recommend non-custodial sentences.

Accordingly, the court sentenced the defendant Xiao Yongming to the crime of illegal mining and sentenced him to three years in prison, four years of probation, and a fine of two million yuan (paid in full).

The illegal income of Shanghai Hongzhu Materials Co., Ltd., 293,807,886.36 yuan returned by the defendant Xiao Yongming, who was detained, was confiscated by the detaining authority according to law and turned over to the state treasury.

Zangge Mining also stated that the above incident was the personal affairs of the actual controller Xiao Yongming. Xiao Yongming did not hold any position in the company and did not participate in any business decision-making of the company. The company's current management personnel are stable and production and operation are normal.

Looking at the company's management, Zangge Mining is now dominated by the "Second Generation Xiao".

In July 2021, Zangge Holdings (now Zangge Mining) completed the change of legal representative, and Xiao Yongming and Xiao Ning, the son of Lin Jifang, became the chairman of the company.

Xiao Yongming's second son, Xiao Yao, became the general manager of Zangge Holdings in 2016 and is currently the vice chairman.

He once became the "King of Potash" through capital operation

According to public information, Xiao Yongming was born in Shiyang Town, Anyue, Sichuan in July 1964. At the age of 17, he followed his father to run a plastic factory and became the deputy director of Anyue Yonghong Plastic Factory all the way.

In 1996, 32-year-old Xiao Yongming came to Golmud City, Qinghai Province, where he co-founded a "little restaurant" and served as the general manager.

In the late 1990s, Golmud, which is rich in potash resources, began to develop potash fertilizer industry.

In 2004, Xiao Yongming saw the opportunity again, invested in Qinghai Kunlun Mining, and continued to increase his holdings. By 2005, Xiao Yongming had become the second largest shareholder, second only to Qinghai Hanhai.

In 2009, Zangge Potash Fertilizer acquired an 85.82% stake in Qinghai Hanhai at a price of 380 million yuan, and thus acquired Kunlun Mining.

Zangge Potash Fertilizer has thus become the second largest potash fertilizer enterprise in China, second only to the Salt Lake Group controlled by Qinghai SASAC, and Xiao Yongming has also won the title of "King of Potash Fertilizer".

The picture is from Zangge Mining Co., Ltd.

In September 2014, Zangge Potash Fertilizer sought to be listed, when the listed company Jinguyuan encountered a crisis of delisting.

Therefore, in 2016, Zangge Potash Fertilizer was successfully listed on the backdoor, and Jinguyuan officially changed its name to Zangge Holdings.

After the listing of Zangge Holdings, Xiao Yongming began to embark on the "road to riches".

In 2016, the Xiao Yongming family became the richest man in Qinghai with a net worth of 26.5 billion yuan, ranking 64th on the Hurun Report that year.

In 2017, an article "The National Day Expressway Is Too Congested?

The report that the Ziyang man drove the helicopter home directly has attracted attention. The owner of the helicopter, confirmed by the media, is Xiao Yongming.

"No flowers bloom in a hundred days", Xiao Yongming became the "King of Potash" through a series of asset transfers, and later the company was heavily in debt due to capital operations.

The incident originated in July 2018.

Zangge Holdings disclosed that it plans to acquire 100% equity of Julong Copper at a price of 28 billion yuan by issuing shares.

In order to bring the income of Julong Copper, according to media reports, Xiao Yongming spent tens of billions of dollars before and after through loans, equity pledges, financing and other means.

But the reorganization ended in failure.

What everyone did not expect was that Xiao Yongming made a trick of "darkness Chencang".

In June 2019, Zangge Holdings disclosed that the controlling shareholder Zangge Group plans to transfer its 37% shares of Julong Copper to the company at a price of 2.59 billion yuan to compensate Zangge Group and its related parties for the listed company. The corresponding amount of occupied funds, funds occupied fees and losses due to trade reasons.

It was also in 2019 that Zangge Holdings was found out by the China Securities Regulatory Commission for financial fraud, and imposed a fine of 900,000 yuan on Xiao Yongming and a five-year market ban.

What is embarrassing is that in June 2020, in order to return the funds occupied by the listed company as soon as possible, Zangge Holdings sold the equity of Julong Copper, and the controlling shareholder of Julong Copper also changed to Tibet Zijin.

However, since 2021, due to the high prosperity of the potash fertilizer market, Zangge Mining's performance has rebounded.