exclusive! Follow-up of intern pretending to be an analyst: 3 of the deceived college students have found jobs

China News Service, Beijing, July 3rd: Exclusive! Follow-up of intern pretending to be an analyst: 3 of the deceived college students have found jobs   China-Singapore Finance Wu Jiaju   Recently, Liu, a graduate student of Fudan University, has aroused concern about counterfeiting a brokerage analyst. During the internship at Guosen Securities and other securities companies, the graduate stud 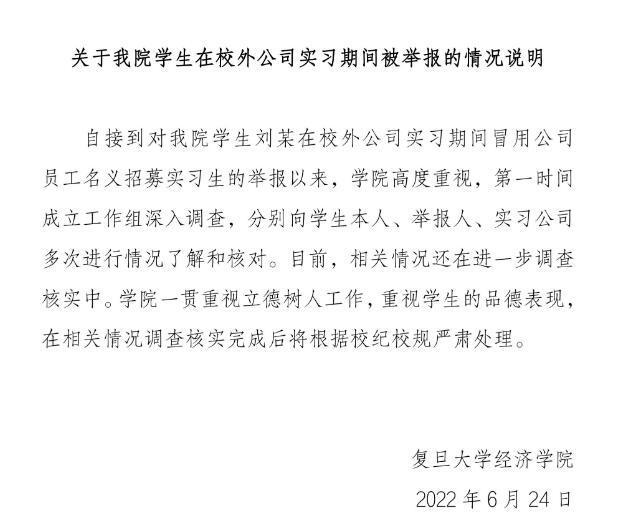 Follow-up of intern pretending to be an analyst: 3 of the deceived college students have found jobs

Recently, Liu, a graduate student of Fudan University, has aroused concern about counterfeiting a brokerage analyst.

During the internship at Guosen Securities and other securities companies, the graduate student pretended to be a securities company analyst to recruit interns privately, and asked several interns to work for him.

Some students who were deceived missed the school recruitment and the spring recruitment because of this.

Zhongxin Finance has learned that it is not the first time that students pretend to be analysts of brokerage firms.

What legal issues are involved in this act?

What legal consequences could a student posing as an analyst bear?

Eight students known to have been scammed, three found jobs

A student (referred to as classmate A) who was deceived by Liu was interviewed by Zhongxin Finance and Economics.

On June 24, Fudan School of Economics issued a statement on the matter, stating that it had conducted several investigations and verifications with the students themselves, the whistleblower, and the internship company.

At present, the relevant situation is still under further investigation and verification.

Figure from the website of the School of Economics, Fudan University

A student told Zhongxin Finance that several students who were deceived

hoped that Liu would "publicly apologize"

According to Securities Times e company reports, Liu has been an intern in a number of securities institutions since 2019.

Student A confirmed the above information to Zhongxin Finance.

The student said that during his

However, there is no evidence to prove that Liu also defrauded by the same means during his internship at Debon Securities.

in the name of the company on some unofficial job-seeking platforms, and we delivered our resumes by ourselves. In order to quickly spread information, brokerages recruit interns, and they will also publish information on official accounts and small programs. Including the WeChat group pushes these messages, so it’s actually hard to tell whether it’s true or false.”

What is the current situation of the deceived students?

Student A said that among the eight students,

one is studying, one is still interviewing for a job, three are waiting for the results, and three are looking for employment

Classmate A also revealed that one of the classmates also received help from an analyst who was impersonated.

After learning about the situation, the analyst extended a helping hand and helped the student complete the back adjustment.

At present, the student has successfully entered the job.

Is impersonating an analyst not new?

In addition, Zhongxin Finance found during the interview that the situation of impersonating an analyst is not a case.

The financial blogger "Dali Rushan", who had exposed Liu's incident on the Internet, told Zhongxin Finance that he had received reports from different students about different scammers, and Liu was not the only one who pretended to be a regular employee to deceive the intern.

The blogger said that before the Liu incident, a deceived person broke the news to him that a student who was an intern at three securities firms, CICC, GF and Kaiyuan, pretended to be an analyst to recruit interns.

After the identity of the "fake analyst" was exposed, he was dismissed by CICC.

It is worth noting that CICC, GF, and Kaiyuan all issued announcements at the end of May on the issue of "posting false internship opportunities in the name of company employees".

The three securities companies announced that there are currently third-party institutions or individuals who use the company's name to release false information to job seekers, ask for relevant fees, or release false internship opportunities on the grounds of providing interviews, internships, and internal referrals.

We reserve the right to investigate the legal responsibility of relevant infringers.

What are the possible legal consequences of fake analyst recruitment?

What are the legal consequences for someone like Liu who pretends to be a brokerage analyst?

According to Article 10 of the Copyright Law, copyright includes the right of authorship, that is, the right to indicate the identity of the author and to sign on the work.

Zhang Qinyu, director and professor of the Institute of Economic Law at China University of Political Science and Law, said in an interview with Zhongxin Finance that

Liu submitted the reports written by the interns in his own name, infringing the copyrights of these students

Zhang Qinyu believes that in this incident, Liu deliberately concealed the fact that he was not a regular employee of the company but was only an intern, making them mistakenly believe that he could retain and help Liu to complete the work for free, resulting in many students being deceived and implemented Fraud.

Article 157 of the Civil Code stipulates that after a civil juristic act is invalid, revoked or determined not to take effect, the property acquired by the actor due to the act shall be returned; if it cannot be returned or it is unnecessary to return, it shall be compensated at a reduced price.

The party at fault shall compensate the other party for the losses suffered thereby.

Based on this, Zhang Qinyu believes that

Liu should compensate the losses suffered by these students, such as internship wages under the same conditions

Hou Zhaohui, a lawyer at Beijing Jingshi (Shanghai) Law Firm, said that according to the relevant regulations of the Shanghai High Court, if the

amount of contract fraud exceeds 20,000 yuan, it can be prosecuted

Since the intern has worked for 10 months and has written a report of nearly 1 million words, it is very likely to reach the starting point based on the average salary and the economic value of the report.

Lawyer Hou Chaohui also bluntly stated that if Liu caused losses to the brokerage, the