Bank of Nanjing reported the case, but the analyst of Western Securities was fired. What happened?

China News Service, July 2 (Reporter Zuo Yukun) "President resigns", "share price plummets", "new chapter" and "report"... Bank of Nanjing fell into one after another public opinion storm in two days .   On the evening of July 1, the Bank of Nanjing issued an announcement saying that the relevant information recently circulated on the Internet was malicious rumors and had been reported to the p 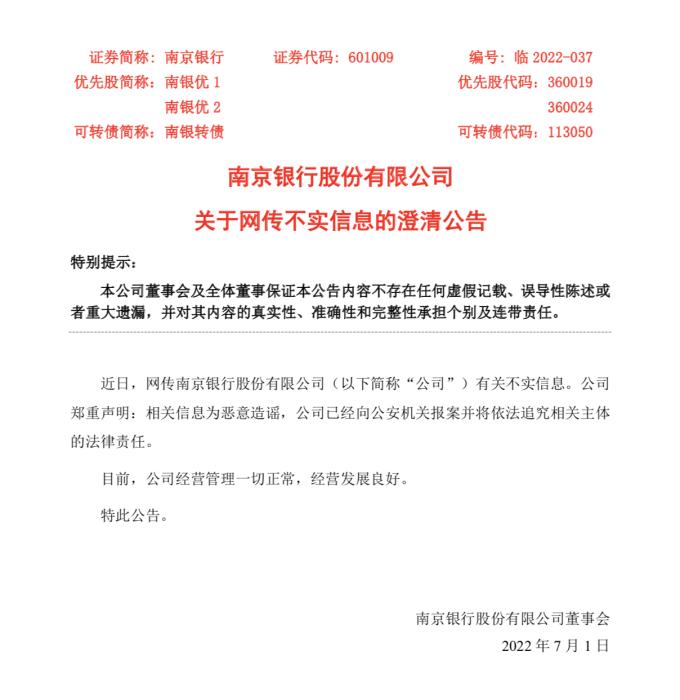 On the evening of July 1, the Bank of Nanjing issued an announcement saying that the relevant information recently circulated on the Internet was malicious rumors and had been reported to the public security organs.

Bank of Nanjing reported the case, and the employees of Western Securities were fired

"Recently, false information about Bank of Nanjing Co., Ltd. was reported on the Internet. The company solemnly declares that the relevant information is malicious rumors, and the company has reported the case to the public security organ and will investigate the legal responsibility of the relevant subjects according to law. At present, the company's business management is normal, and Good development." On the evening of July 1, Bank of Nanjing Co., Ltd. issued an announcement.

Bank of Nanjing did not reflect the specific content of the false information in the announcement.

But at noon that day, a group chat involving Bank of Nanjing quickly spread on social media, the main content being "Fu Mingfei@Western Communications Chief"'s risk judgment on Bank of Nanjing.

Screenshots from the Internet show that after the chat records were circulated, Fu Mingfei apologized urgently in the circle of friends, saying that the relevant group chat records were not distributed with my consent, and the content was not within the scope of his professional research, nor was it verified, and it was very different from the facts.

The latest news is that on the morning of July 2, Western Securities responded to the Securities Times, saying that Western Securities was concerned that a group purchase WeChat group chat record containing Fu Mingfei, an employee of the company's R&D center during the trial period, was spread on the Internet, and the company immediately complied with the employee. Inquiries and investigations.

"After investigation, the employee reposted online information involving Nanjing Bank in the group-buying WeChat group at 18:00-18:50 on June 30, 2022, and there were false remarks. The employee was not a researcher in the banking industry, and the company did not authorize it. It conducts research on the banking industry." Western Securities said that the company has now held compliance accountability for the employee, terminated Fu Mingfei's probationary period, and terminated the labor contract signed by the company on February 18, 2022.

Screenshot from the official website of Bank of Nanjing.

The new chapter announcement is suspected to be deleted

In addition to this remark turmoil, there was also a news about Bank of Nanjing on July 1.

The announcement shows that due to the long service life and serious wear and tear of the seal of "Bank of Nanjing Co., Ltd.", in order to facilitate the smooth development of various tasks, the bank

Decided to change the stamp.

The name of the new seal remains unchanged, and the registration has been completed in the Xuanwu Branch of the Nanjing Public Security Bureau.

From July 1, 2022, the new seal of "Bank of Nanjing Co., Ltd." will be used, and the original seal will be invalidated and destroyed on the same day.

But the announcement was soon no longer available on the official website.

There is still no trace of the announcement on the official website of Bank of Nanjing on July 2, and it is suspected to have been deleted.

The beginning of all this turmoil can be traced back to a resignation announcement two days ago.

On the evening of June 29, Bank of Nanjing issued an announcement saying that Lin Jingran, the company's director and president, was appointed due to work needs.

Submitted a resignation report to the board of directors on the same day, resigning from the positions of director, chairman of the risk management committee of the board of directors, member of the development strategy committee, president, chief financial officer and authorized representative of the bank. The duties of president of Bank of Nanjing are temporarily performed by Chairman Hu Shengrong. .

The move surprised the market.

Judging from the public information, Lin Jingran has just served as the president of Bank of Nanjing for two years, and his term has not yet been completed.

Affected by this news, after the opening of the market on June 30, the Bank of Nanjing plunged rapidly in early trading and hit the daily limit.

But soon, Lin Jingran's whereabouts seemed to be clear.

By the end of 2021, the total assets of Southeast Group will be nearly 190 billion yuan and the net assets will be about 62 billion yuan.