Chinanews.com June 29th telegram: "Itinerary card cancellation asterisk" exploded, and the search volume for air tickets and train tickets also exploded   China-Singapore Finance reporter Li Jinlei   On June 29, the website of the Ministry of Industry and Information Technology announced that in order to resolutely implement the general strategy of the Party Central Committee and the State Cou 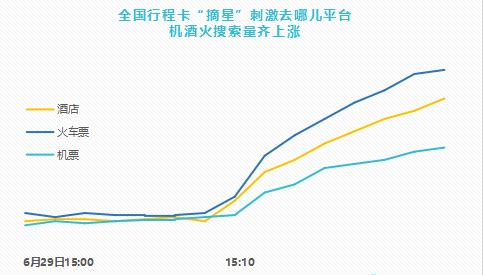 On June 29, the website of the Ministry of Industry and Information Technology announced that in order to resolutely implement the general strategy of the Party Central Committee and the State Council on "foreign import, internal defense rebound" and the general policy of "dynamic clearing", to support the efficient coordination of epidemic prevention and control and economic and social development, it is convenient to For the majority of users to travel, the "asterisk" mark of the communication itinerary card will be cancelled from now on.

Soon, the "Itinerary Card Cancellation Asterisk" was "exploded" on the hot search, and the attention was extremely high.

Zhongxin Finance noticed that after the release of this news, the search volume of air tickets, train tickets, and hotels on major travel platforms also exploded and increased significantly.

According to Qunar platform data, half an hour after the news was released, the instant search volume for international air tickets on the platform doubled, reaching the highest peak in the past two years.

"General Internet platforms have a traffic monitor to prevent hacker attacks. Before the traffic was relatively stable, the system would give an early warning because of a sudden increase in traffic."

The search volume of many popular travel destinations on the Ctrip platform has increased by more than 300%, and users' willingness to travel has further increased.

What is the impact of removing the asterisk from the itinerary card?

Cheng Chaogong, chief researcher of Tongcheng Research Institute, believes that the cancellation of the "asterisk" mark on the communication itinerary card is generally the basic idea of ​​implementing the ninth edition of the prevention and control plan.

At present, the regional scope has been accurate to the district and county level. The original communication itinerary card "asterisk" can only be marked at the prefecture and city level. There are differences between the two. After canceling the asterisk mark, the itinerary card can be used as an epidemic prevention tool. In line with the latest prevention and control policies.

Cheng Chaogong said that after the asterisk mark is removed from the itinerary card, the epidemic prevention policy that people must abide by when traveling and traveling will realize a true national rule and a ruler, which can effectively avoid the layer-by-layer overweight and one-size-fits-all phenomenon based on the asterisk mark on the itinerary card, thereby Make it more convenient for people to travel and travel under the normalization of prevention and control.

Data map: Tourists "embracing the sea" on the beach at the ends of the earth.

In the past month, the overall situation of my country's epidemic prevention and control has stabilized and improved. The number of positive infections has continued to decline, and the number of areas with epidemics has also decreased.

According to data from the Ctrip platform, as of June 28, bookings for inter-provincial travel from July 1 to August 31 have increased by nearly 200% from the previous month.

On the Qunar platform, in the past week, the number of hotel reservations nationwide has exceeded the same period in 2019.