Has your fund's returns "turned positive"?

China News Service, June 28 Question : Has your fund earned?   Zhongxin Finance Gong Hongyu   The fund, which has been trapped in the words "losing money" and "losing money" for a long time, suddenly became popular. In the past few days, some Christians were pleasantly surprised to find that their investment income had "turned positive" unknowingly.   "I finally made money, it's not easy." Ha 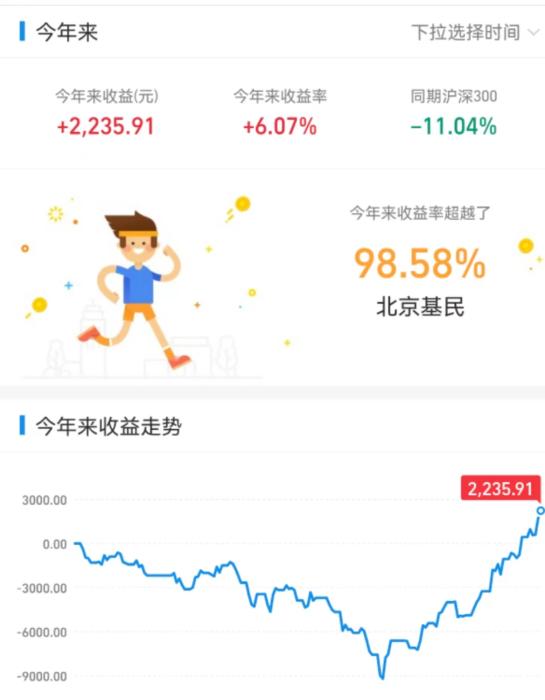 Question : Has your fund earned?

In the past few days, some Christians were pleasantly surprised to find that their investment income had "turned positive" unknowingly.

"I finally made money, it's not easy." Have you caught up with the fund's return to blood?

The fund returns from losses to profits.

"Today is worth remembering. After buying the fund for two years, the return has finally turned positive." Recently, Xiao Li excitedly posted a screenshot of the long-lost positive return of the fund on Weibo.

Like Xiao Li, there are many investors who only realize the taste of making money after a long time.

The income has finally brought "+", the figure has returned to positive from negative 5-digit numbers, and the yield has exceeded 1%... Many Christian Democrats are fancy "showing joy" on social media platforms.

As described by netizens, this round of fund recovery is more of a "sense of surprise", and Christians who have been "lying flat" in front of the yield for a long time have suddenly gained an unexpected wave of blood.

"Without the slightest bit of precaution," Youjimin said.

"Happiness is someone else's, I don't"

However, some are happy and some are sad.

In contrast to a wave of gains, some Christians also seem relatively lonely.

"Mine is still losing money." Seeing that everyone posted screenshots of making money, Miss Zhang reluctantly said that her total income was still negative more than 7,000 yuan.

"Mine is still negative." Xiao Zhang, who bought a mixed medical and health insurance, told Zhongxin Finance that her total rate of return was still at -3.23%.

Some netizens also laughed at themselves, "I glanced at my fund on a whim and found that I defeated 97% of Shanghai's Christian Democrats with an excellent score of -270 yuan."

Is making money a "rare thing" in fund investment?

Zhongxin Finance has noticed that even the popular funds that have become popular recently have had a negative total return in the past year, which can be said to have experienced a long trough period.

Some popular funds have a year-on-year increase.

In addition, the rise and fall of returns can also be seen in the fund index.

But prior to this recovery, funds had been sluggish for several months.

Fund index trend over the year.

Flush data shows that under the influence of relevant good news, the recent

gains in new energy, batteries, automobiles and other themed funds are optimistic

Industry analysts said that the current market is in a favorable environment for economic recovery after the epidemic, and the stock index and fund index are expected to continue the rebound trend.

Founder Securities Research Report pointed out that the personal pension system will bring new growth to the fund industry.

In May 2022, the China Banking and Insurance Regulatory Commission issued the "Notice on Regulating and Promoting the Development of Commercial Pension Financial Services" to further encourage individuals to establish pension accounts and choose financial products such as bank wealth management, pension insurance, and public funds that meet the regulations according to their own investment risk preferences.