The intern faked the analyst to recruit the intern to write a research report, and the identity was exposed by chance encounter

Graphics: Wu Jiaju   Zhongxin Finance, June 26 (Wu Jiaju) "An intern faked a brokerage analyst and tricked a group of interns to help him write a report. Some people were still working overtime during the Spring Festival and wrote a million words in 10 months!"   Recently, there has been new news about this event that swiped the financial circle.   On the evening of the 24th, the School of Econ 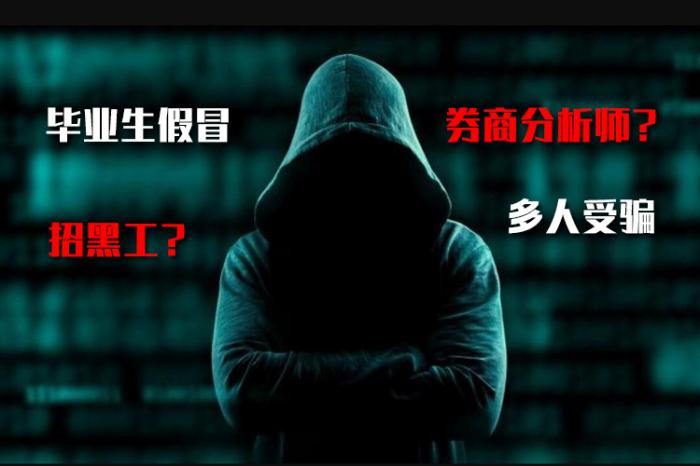 Zhongxin Finance, June 26 (Wu Jiaju) "An intern faked a brokerage analyst and tricked a group of interns to help him write a report. Some people were still working overtime during the Spring Festival and wrote a million words in 10 months!"

Recently, there has been new news about this event that swiped the financial circle.

On the evening of the 24th, the School of Economics of Fudan University issued a statement saying that since it received a report that Liu, a student of the School of Economics of Fudan University, recruited interns under the name of a company employee during an internship at an off-campus company, the school attached great importance to it and set up the work immediately. The team conducted in-depth investigations, and conducted multiple investigations and verifications with the students themselves, the whistleblower, and the internship company.

At present, the relevant situation is still under further investigation and verification.

On May 22, a student (hereinafter referred to as classmate A) posted on an app saying that he had encountered a fake brokerage analyst and was deceived for half a year.

Student A stated that in July 2021, he delivered an internship for "Top 10 securities companies" in a small program, and soon received a phone interview.

After the interview, a person who claimed to be an analyst surnamed H, the chief military officer of GX (Guoxin) Securities Company, added his WeChat account and told him that this was a formal internship, and that the internship could be retained for more than six months.

Student A said that he had repeatedly confirmed to the other party whether he was a formal intern and whether he had any opportunities before joining the job, and he received a positive answer.

The other party signed the "internship agreement" and "internship safety agreement" with him on July 17, 2021, and at the same time told him on the day the contract was signed that he would become an official intern from now on. Be strict with yourself.

As time went on, he became more and more aware that something was wrong.

Student A said that his acceptance letter could not be issued for a long time, and the "teacher" also repeatedly shied away from issuing the internship certificate, which made him suspicious and asked many times.

At the same time, in December 2021, the "teacher" asked him to submit a defense report, and soon informed him that he had passed the defense and was retained.

However, in March 2022, the "teacher" claimed that he could not be hired on the grounds that "the company temporarily reduced the recruitment, and the undergraduate degree was held".

Student A thought this reason was too blunt, so he asked the school's career guidance center for help, and contacted the human resources department of GX Securities Company, but finally found out: the "teacher"'s WeChat is not owned by the analyst, and the company does not have his internship and Records of defense.

At this point, he realized that the "teacher" who had been talking to him was not an analyst of the securities firm at all!

His efforts for more than half a year were completely in vain.

More seriously, as a fresh graduate, he missed an important internship period.

After classmate A posted about his experience of being deceived, it was forwarded by a financial blogger, and the influence of the incident was further expanded.

To his surprise, another deceived (hereafter referred to as classmate B) contacted him.

Only then did he realize that he was not the only one who had been deceived.

According to the Securities Times report, on May 28, 2021, classmate B also delivered the application for the military industry research internship of Guosen Securities Company through the mailbox.

On May 30, 2021, the real analyst with the surname H added his WeChat, and the two sides had a brief exchange.

Coincidentally, however, on May 31, 2021, classmate B later received an "interview call" from another person who claimed to be an analyst surnamed H, telling him that he would be turned into a summer intern in two or three weeks, and assigned him a task.

This made classmate B realize that the analyst H who assigned him the task might be a fake.

A little over a week later, the real analyst H informs classmate B that the human resources department failed to pass his internship application.

Classmate B then stopped working and deleted the fake "Mr. H" WeChat.

However, a subsequent encounter allowed classmate B to confirm the identity of the fake analyst.

When classmate B participated in another securities company, after the interview, a man approached classmate B and asked him if he was a newly recruited researcher by the company.

After a brief conversation between the two sides, classmate B scanned the man's WeChat and found that the name that popped up was "peterliu", the same avatar and the same name.

Student B quickly clicked "Return" to avoid being discovered by the other party.

Student B immediately informed the securities company about the situation.

On November 17, 2021, the relevant personnel of the securities company called and said that they had suspected "peterliu" of misconduct before, and now it was confirmed through the experience of classmate B.

Student B learned from this that the real identity of the fake H analyst and "peterliu" in WeChat is: Liu, a 2020-level master student in finance at the School of Economics of Fudan University.

After that, more and more deceived students were linked together, and with the exchange of information and the involvement of various parties, the puzzle of truth became more and more complete.

Student A also sorted out the descriptions of several students, and sorted out Liu's cheating timeline.

Some interns who were deceived missed the school recruitment and the spring recruitment because of this.

There are also interns who were originally hired by a well-known company, but because of this questionable internship experience, the offer was eventually cancelled.

Liu worked as an intern in a number of securities firms

According to the Securities Times, Liu worked as an intern at a number of brokerage firms.

Some interns said that in the 10 months they were deceived, they had completed a research report with millions of words, and even worked overtime on the first night of the new year.

As the event fermented, many brokerages also issued statements one after another.

Guosen Securities issued a statement on May 25 saying that it recently discovered that outsiders posing as analysts of the company's Economic Research Institute were recruiting interns.

The main manifestations are: the relevant personnel falsely claimed to be an analyst of Guosen Securities Economic Research Institute, released recruitment information through WeChat and other channels, and informed the other party that the student was hired as a formal intern after a telephone interview, and the internship opportunity for more than six months could be retained. , and sent the internship agreement and other documents to the other student through WeChat, which is false.

According to the Securities Times report, the impersonated analyst H said that he did not know any of the interns whom Liu recruited privately.

Analyst H said that a securities firm once did due diligence and asked him to verify the internship experience of a deceived college student. He could only reply objectively to the other party and had no impression of the student's "internship" experience.

After learning about Liu's misconduct, Analyst H once sent a text message to warn the other party, "I said at the time that if you do this again, I will definitely go through legal proceedings."

The initiator of the incident, Liu Mou, was also an outstanding student representative in the eyes of his classmates before it was revealed.

On June 8, in the announcement of the list of prospective winners of Fudan University's outstanding graduate graduates in 2022, Liu in this incident was listed, and then the incident was fermented on the Internet platform.

The Securities Times report also pointed out that Northeast Securities once issued an offer to Liu, but after learning of Liu’s misconduct at the end of January 2022, it terminated the employment agreement with him.

After being terminated by Northeast Securities, Liu accepted an offer from Debon Securities.

However, after learning about the incident, Debon Securities issued a statement on June 10 saying that it had paid attention to the "intern incident" that was hotly discussed by the outside world, and contacted the student's alma mater - Fudan University as soon as possible.

At present, the school has been actively investigating and verifying.

After learning of this incident, Debon Securities attached great importance to and actively cooperated with the school to investigate and verify.

Until the school provides feedback and a clear conclusion of the investigation, the student's school recruitment process will be suspended.

According to the Securities Times report, the current measures taken by the college against Liu include the cancellation of outstanding graduates.

In the updated announcement of the proposed winners of outstanding graduates, Liu's name has been deleted.

"The college has always attached great importance to the work of building morality and cultivating people, and attaching importance to the moral performance of students. After the investigation and verification of the relevant situation is completed, it will be dealt with seriously according to the school rules and regulations." The School of Economics of Fudan University emphasized in the fact sheet on the evening of the 24th.

Figure from the website of the School of Economics, Fudan University

According to reports relayed by the staff of the college, some media reported that Liu claimed that there were "less than 10" classmates who were deceived.

Liu also defended to the college staff that every time he went to a new unit, these interns were brought in to give them a new opportunity.

The financial blogger "Dali Rushan" said that he had received reports from different students about different scammers, and that

In addition to Guosen Securities and Debon Securities, which Liu had interned as mentioned above, CICC, GF, Kaiyuan and other securities companies also issued announcements recently, saying that some institutions or individuals have been found to falsely use the name of company employees to publish false internships. Chance.

He also stated that it reserves the right to pursue legal responsibilities for institutions and individuals who publish false information.

Some netizens left a message: Interns lied to interns, not only Liu Mou in Fudan, but should stop at Liu Mou.