Sino-Singapore Jingwei, June 25th (Lei Zongrun) "Piles of oil-stained dishes, put them in the dishwasher, and rinsed with water, immediately become as clean as ever." No oily dishes, no sticky Tired hands and no disputes over who is going to wash the dishes, this is a beautiful scene depicted to consumers by most dishwasher advertisements.   The 2022 JD.com 618 full-year battle report shows tha 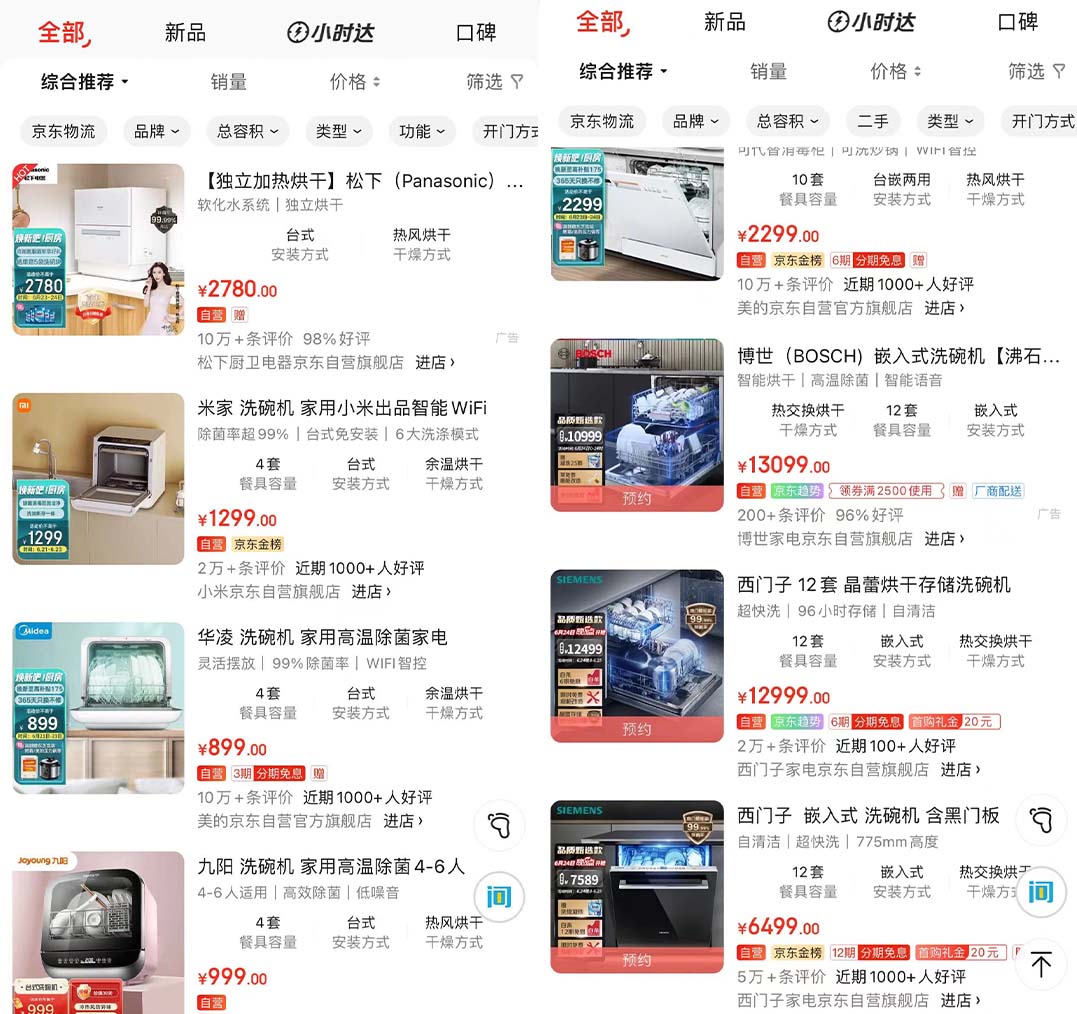 Sino-Singapore Jingwei, June 25th (Lei Zongrun) "Piles of oil-stained dishes, put them in the dishwasher, and rinsed with water, immediately become as clean as ever." No oily dishes, no sticky Tired hands and no disputes over who is going to wash the dishes, this is a beautiful scene depicted to consumers by most dishwasher advertisements.

The 2022 JD.com 618 full-year battle report shows that the turnover of built-in dishwashers has increased by over 250% year-on-year, of which the turnover of new products accounts for over 40%.

From the perspective of the consumer market, more and more families are beginning to choose dishwashers.

However, compared with the penetration rate of dishwashers in European and American households, dishwashers are still an electrical appliance in a few households in China.

Why is the dishwasher not popular in the Chinese market?

Searching for dishwashers in social media, most of the topics are related to "regret". Among them, some people regret that they bought the dishwasher late; "Intelligence Tax".

It can be seen that consumers do not unanimously recognize the practicality of dishwashers.

Or regret buying it late?

"Every time I have to wash a lot of dishes, I will think of the text "Contracted Workers", and I feel that I am also forced to work in exchange for low value." Ms. Kong (pseudonym) who lives in Xi'an does not like washing very much. bowl.

Both Ms. Kong and her husband are teachers, and they are usually busy with their work. In their free time, they both like to read books, and no one wants to do housework, especially washing dishes.

"The question of who washes the dishes at home has always been a point of conflict between our husband and wife, so when I moved to a new house seven years ago, I bought this dishwasher, which cost nearly 7,000 yuan." Ms. Kong said that they As early as 2015, the family bought a freestanding 13 sets of dishwashers.

When the dishwasher was first installed, the quality of life in her family improved a lot, and washing dishes became a very fresh thing, and I didn't feel any inconvenience in the dishwasher. "That paragraph Time, my husband and I are both lamenting the convenience brought by technological progress." Ms. Kong said.

After a long time, Ms. Kong gradually discovered that the dishwasher did not completely solve the trouble of washing dishes. "The dishes need to be cleaned of food residues, simply rinsed, and then placed neatly. This process is still unavoidable that the hands are stained with oil, and the dishes are placed. It also takes a lot of time. After washing the dishes for more than two hours, remember to take out the dishes and place them in the cupboard neatly. Moreover, you still have to do the cleaning of the stove, cutting board and other procedures by yourself. The dishwasher is only a Solved a part of the dishwashing process."

Ms. Kong said that not only has the trouble of washing dishes not been completely solved, but also added more troubles.

Not only do you have to worry about the problem of clogging the dishwasher filter, water stains, and bacterial growth, but also whether the kitchen utensils are suitable for washing in the dishwasher, such as printed tableware, wooden cutting boards, non-stick pans, aluminum pans, etc. Not suitable for dishwasher cleaning.

"My ideal dishwasher is that the dishes can be cleaned directly by putting them in, and when they need to be used, they will have clean and hygienic dishes as soon as they are taken out, let alone adding dishwashing powder, dishwashing salt, bright medicine." Ms. Kong said.

Except for a lot of dirty dishes, Ms. Kong's dishwasher has rarely been used. She feels that although the dishwasher brings a lot of convenience, she regrets that she bought her own dishwasher early, and waits until the technology is mature. It is also possible to buy.

The post-90s Ms. Gu (pseudonym) does not think so, "How useful is the dishwasher, only those who wash dishes every day know that the dishwasher can save a lot of trouble, especially when family and friends come to dinner, the number of tableware is relatively high. Most of the time, the dishwasher allows me to finish the housework gracefully and quickly. After buying a dishwasher, I really regret that I bought it late.”

Ms. Gu told Sino-Singapore Jingwei that her dishwasher was purchased at a cost of more than 9,000 yuan during the "Double Eleven" in 2021. It is a built-in 13 sets of dishwashers, which is also very worry-free to use. Simply rinse the tableware and put it in the dishwasher. The washing, drying, and sterilizing process can be completed in more than two hours, and the tableware can also be stored.

"The dishwasher frees up my hands to a great extent. After putting the dishes in the dishwasher, I can do other things, which not only saves me a lot of time, but also frees me from washing dishes. Oil stains." Ms. Gu's dishwasher has long been a must-have appliance in the kitchen.

Not only the price factor, but the many brands and styles of dishwashers make it difficult for consumers who do not know dishwashers to choose.

Ms. Gu said, "At that time, when my family bought a dishwasher, there were really no way to start with various styles and brands. Choosing a dishwasher that meets the needs of the family and is reasonably priced is to avoid the dishwasher from becoming an 'IQ tax'. The best way."

When did it become standard in Chinese households?

In recent years, the overall performance of the home appliance market has been sluggish, but dishwashers, as an emerging category that has attracted much attention in the kitchen appliance market, have maintained stable and high growth.

In terms of the overall performance in 2021, the overall retail sales of dishwashers will be nearly 10 billion.

With the rapid development of the dishwasher market, there are also major leading manufacturers.

According to Robam’s annual report data, in 2021, the revenue of Robam’s dishwasher products will reach 450 million yuan, a year-on-year increase of 101.32%, accounting for 4.44% of total revenue.

Among them, the offline retail market share of built-in dishwashers reached 17.5%, ranking second in the market.

In the desktop dishwasher market, Xiaomi has increased the proportion of online retail sales from 0 to 6.9% in just two years.

In the independent dishwasher market, foreign high-end brands such as AEG, Miele, and Human Touch also quickly joined the market and continued to seize market share.

Especially in the integrated sink dishwasher market, there is currently a lack of mainstream brands, which is the focus of competition among major brands.

After many brands and products have joined the dishwasher market, the market competition has become more and more fierce. How to improve the effectiveness of dishwashers and upgrade the product experience has become the focus of major brands.

From the point of view of the selling point of dishwashers, functions such as drying, disinfection, and storage are becoming more and more popular.

At the same time, the average price of some styles has also decreased.

Sino-Singapore Jingwei searched on an e-commerce platform and found that the price of dishwashers ranges from several hundred yuan to ten thousand yuan. 13,000 yuan.

Liang Zhenpeng, a senior industrial economic observer, told Sino-Singapore Jingwei that there are large price differences among all models of dishwashers, "There are some simple table-top dishwashers that do not require installation, and are only a little larger than microwave ovens, costing only one or two thousand yuan. You can buy one, but the cleaning effect is not good, and in

more cases, this dishwasher is not much different from a toy.

Liang Zhenpeng also said that the price of professional built-in dishwashers is relatively expensive. The

general price is about 8,000 to 10,000 yuan, which is significantly more expensive than ordinary household appliances. This is also in the current Chinese market. The main reason for the low penetration rate.

Liang Zhenpeng pointed out that as more and more consumers buy new houses and old houses, many users will consider dishwashers before decoration.

In general, dishwashers will sooner or later become standard in Chinese urban households, just like European and American households.