China News Service, Jinan, June 14 (Sun Tingting) Shandong, a major wheat-producing province, will focus on the acquisition of about 20 billion catties of summer grain during the concentrated acquisition of summer grain this year. The province continues to implement the minimum purchase price policy this year. If the purchase price of wheat in a certain region of the province is lower than the m 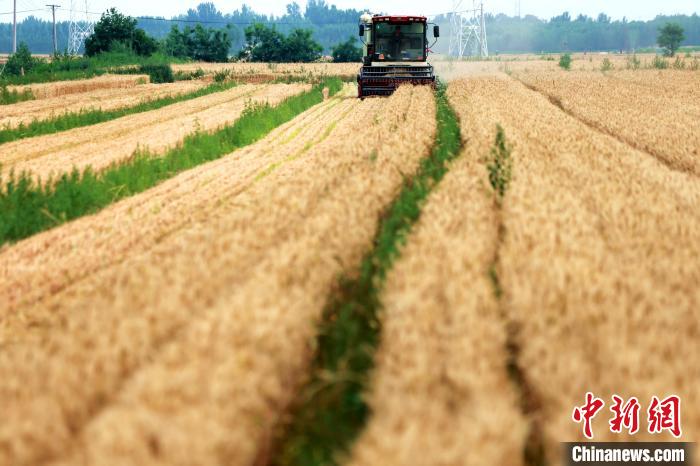 The Shandong Provincial People's Government held a press conference on the 14th to introduce the province's efforts to purchase and store summer grain to ensure food security.

(Data map) On June 12, in Zhangqiu District, Jinan, Shandong, in Jinwang Village on the bank of the Yellow River, a large area of ​​wheat fields were harvested.

At present, the production of "Three Summers" in various parts of Shandong is in full swing, and the harvest of summer grains is in full swing from south to north and from west to east.

Each service center will carry out "five generations" services with cleaning, drying, storage, processing, and sales as the main content, implement various policies and measures to save grain and reduce losses, and do everything possible to help farmers reduce losses and increase income.

"The per capita ration consumption of Shandong residents does not exceed 0.7 catties/day (finished grain), which is equivalent to about 360 catties of raw grain per year. Therefore, the situation that wheat production exceeds demand has not changed, and ration consumption is absolutely guaranteed." Shandong Provincial Bureau of Grain and Reserves Lu Ming, director of the Grain Reserve Department, said that Shandong is a province with large reserves. From June 1 to 10 this year, the province has purchased 555,000 tons of new wheat, 267,000 tons more than the same period last year. 1st to September 30th) to purchase about 10 million tons of new wheat, which is equivalent to the average year.

Lu Ming revealed that through recent scheduling and analysis and judgment, this year's summer grain harvest in Shandong exceeded expectations, showing "three highs" in quantity, quality and price. Grain holders have a certain degree of reluctance to sell and cover sales, hoping to sell at a good price and get a good deal. income.

All parties have sufficient funds and warehouse capacity for the acquisition of the main body, and have a strong desire to enter the market for acquisitions.

Therefore, with the recent harvest of new grains, the market game may become more intense, and the price of wheat will fluctuate at a high level, and the market will be repeated or become the norm.

Shandong has strengthened financial support for grain purchases to ensure that grain-selling farmers “get the grain and get the money.”

The Shandong Provincial People's Government held a press conference on the 14th to introduce the province's efforts to purchase and store summer grain to ensure food security.

"At present, the Shandong Branch of the Agricultural Development Bank has initially determined to provide credit support to 354 corporate summer grain purchase loan customers. The customers cover various purchasers such as grain reserves, purchase and sales, and leading processing. There are nearly 1,000 purchase outlets, covering all counties (cities) in the province. , district), which can meet the needs of farmers to sell grain nearby.” Shi Zhuhua said that the bank also supported 38 enterprises under the city and county-level grain purchase credit guarantee funds, involving 19 cities and counties, with a fund size of 330 million yuan. Since then, 640 million yuan of loans have been issued, effectively solving the problems of financing difficulties and guarantee difficulties for grain enterprises.

It is understood that at present, Shandong Province has included 2,206 grain distribution enterprises above designated size, including 454 state-owned enterprises, 1,683 private enterprises, 69 foreign-funded enterprises and enterprises from Hong Kong, Macao and Taiwan, with an average annual purchase of 76 billion catties of grain from producers. above.

The harvest of summer grain is the "first battle" of grain production throughout the year, and organizing the mechanized harvest of wheat is an important guarantee.

It is understood that in order to ensure the harvest of summer grains, Shandong organized 190,000 rice and wheat combine harvesters to go into battle, and 280,000 agricultural machinery technicians and agricultural machinery operators participated in the "Sanxia" battle. Harvest in time and return the pellets to the warehouse.