Pork prices have risen for 9 consecutive weeks, returning to more than 10 yuan, and farmers are relieved 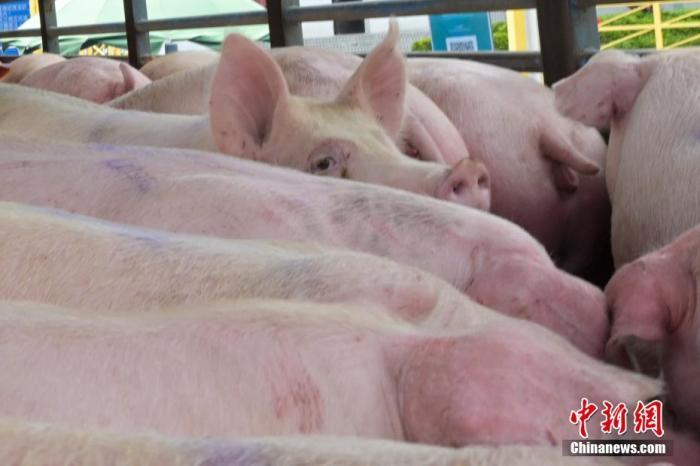 This was also confirmed by a meat seller in a vegetable market in Fengtai, "This wave of pork prices has been rising for about a month."

A reporter from China-Singapore Finance and Economics combed the data and found that the average purchase price of live pigs and the average ex-factory price of white strips have risen for 9 consecutive weeks, with a cumulative increase of 19.7% and 16.8% respectively.

According to the monitoring of the National Agricultural Products Wholesale Market Price Information System, from May 20 to May 26, the price of pork was 20.99 yuan per kilogram, an increase of 0.8% month-on-month, and remained above 10 yuan per kilogram.

The price increase on the acquisition and wholesale side is also reflected in the price tag on the retail side.

In a vegetable market in Fengtai District, the front and rear prices were still 13.8 yuan a pound in late April, and it had risen to 15.8 yuan a pound on May 30.

Pork section of a vegetable market in Fengtai District, Beijing.

The rise in pork prices has also allowed farmers to "take a breather".

Before the price of live pigs continued to be at a low point, the industry fell into a situation of "selling one head and losing one head", and small and medium-sized farmers appeared "abandoned".

Now with the rise in pig prices, the profitability of breeding has gradually recovered.

According to data released by the National Development and Reform Commission's Price Monitoring Center and Zhuochuang Information, in the fourth week of May, the national pig feed price ratio was 4.48, a month-on-month increase of 1.36%.

According to the current price and cost, the future profit of pig breeding head will be 104.10 yuan.

Although the rise in pork prices is a good thing for farmers, but it is the off-season for pork consumption recently, why did the prices rise?

According to the pig breeding process, the number of breeding sows is about 10 months ahead of that of live pigs.

According to Ma Liyuan, an analyst at Zhuochuang Information, in terms of live pig supply, under the influence of news such as Guangdong's live pig transportation policy and frozen pork purchase and storage, the industry is more bullish on the market outlook. Pig prices rose.

"In terms of demand, because pork prices are at the bottom, low prices have a certain stimulating effect on consumption. In addition, some slaughtering companies have the intention of dividing and entering the warehouse. The operating rate of slaughtering companies is relatively high, which has certain support for price increases." Ma Liyuan told reporters.

How long will this wave of pork price hikes last?

"In April and May, the breeding side will focus on slaughtering and reluctant to sell. At present, the weight of live pigs is too large. As the weather turns hot, the demand for heavy-weight pigs will decrease, and some of the slaughtered pigs may be released one after another." It is hot, and the terminal demand may decrease. It is expected that the price of live pigs will fall in June.

However, Ma Liyuan also mentioned that the market is currently in a transition from oversupply to undersupply. Although there is a risk of a fall in pig prices in June, the decline is limited, and the monthly average price is unlikely to hit a new low in March.

"Considering that the production capacity of reproductive sows has declined since July last year, it has continued until April this year. This also means that the resulting reduction in the supply of live pigs will continue until the beginning of next year, so the price of live pigs may continue to rebound in the later period. "Feng Yonghui thinks.

A new round of "pig cycle" will start?

The recent rise in pork prices has also sparked speculation about the start of a new "pig cycle".

The so-called "pig cycle" is a cycle of cyclical pork price changes in which "high prices hurt people and low prices hurt farmers".

The co-chief economist of CITIC Securities clearly believes that from the perspective of the duration of a typical "pig cycle", this round of "pig cycle" is coming to an end.

Looking further at leading indicators such as the year-on-year growth rate of fertile sows and live pigs, a new round of "pig cycle" is brewing.

"A new round of pork price upward cycle will start in the third quarter." Xie Yunliang, a macro analyst at Cinda Securities, predicts that from the perspective of production capacity, there will be an inflection point at the end of the second quarter of 2021. From the perspective of profitability, the pig breeding industry It has experienced two rounds of losses; from a policy perspective, the official news is that pig prices are rising.

On April 20, Yang Zhenhai, director of the Animal Husbandry and Veterinary Bureau of the Ministry of Agriculture and Rural Affairs, said at a press conference that our expert team predicted that with the continuous accumulation of various favorable factors such as the high number of newborn piglets and the high decline in feed costs, pig breeding in the third quarter will continue to accumulate. It is expected to turn losses into profits, but uncertainties still exist.

Have you bought pork recently?

Have pork prices gone up?