Why is this provincial capital with a population of 10 million and a GDP of trillions of dollars a "house price depression"?

Zhongxin Finance, May 27 (Zuo Yukun) Since May, many places have entered the fast lane to relax the regulation of the property market. But when the number of policies is increasing and the convergence is getting higher and higher, the new policies launched by a provincial capital city are especially different.   Changsha, Hunan Province recently proposed a new idea of ​​"simultaneous developmen 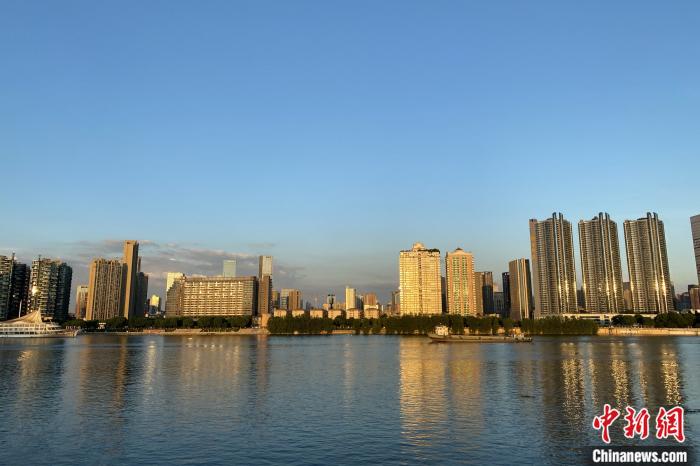 Zhongxin Finance, May 27 (Zuo Yukun) Since May, many places have entered the fast lane to relax the regulation of the property market.

But when the number of policies is increasing and the convergence is getting higher and higher, the new policies launched by a provincial capital city are especially different.

Changsha, Hunan Province recently proposed a new idea of ​​"simultaneous development of rental and purchase", which was praised as a "regulatory trick".

From "house price depression" to "regulatory pacesetter", what is the beauty of this city?

A view of Changsha.

"Rent out even if you don't have a room"

On May 11, the "Pilot Implementation Plan for Promoting the Multi-subject Supply and Multi-Channel Guarantee of revitalizing the Existing Houses in Changsha City" was released, which is very eye-catching in the adjustment of property market policies such as sales and purchase restrictions in other regions.

The new policy clarifies that owners can sign cooperation agreements with pilot enterprises, and be supervised by the Changsha Housing Rental Supervision Service Platform, and revitalize the stock houses for rental housing, with an operating period of not less than 10 years.

Before the implementation of the "Plan", the houses that have been signed and handed over or have been registered for real estate

will not be included in the calculation of the number of family housing units after they have been revitalized for rental housing.

To put it simply, after meeting the above requirements, for Changsha families who own multiple suites and are in a purchase-restricted state, they can “revitalize their second-hand houses into rental housing” at any time, and they can get one or even two brand new “room tickets”. "

This has been called by industry analysts as a "strange move" that has opened up the passage between Changsha's new housing, second-hand housing and rental markets.

According to Zhang Bo, Dean of the 58 Anju Room Real Estate Research Institute, the Changsha New Deal has opened up a new idea of ​​"renting and purchasing simultaneously", which not only increases the supply of rental housing in the market, but also further enhances the effective housing potential in the region. Synchronization has played a positive role in stabilizing the local real estate transaction market.

At the same time, the owner has obtained the qualification for a second home, and must hand over the house to a state-owned enterprise for leasing, and has clear requirements for the length of the lease.

"To a certain extent, this has increased the supply of rental housing in the market, because it is a long-term lease, and to a large extent has avoided the problem of real estate speculation and speculation." Zhang Bo said.

And this is not the first time that Changsha has been "out of the circle" because of real estate.

A view of Changsha.

"Changsha, as the capital city of the province, has well-controlled housing prices, and it is still affordable if you work hard." After studying abroad, Liu Ran (pseudonym), a native of Hunan, chose to return to the capital city of her hometown to develop and buy property.

"After staying in the north for a few years and having a general understanding of housing prices, I still feel very proud that Changsha's housing prices are so low and cost-effective. It may not be comparable to the surrounding cities such as Chengdu and Chongqing, but Changsha's neighborhoods are relatively good. The environment and commercial equipment are still very good." Liu Ran believes.

Referring to the data of China Housing Price Market Network, although Changsha housing prices have risen for 17 consecutive months, the current average price of new houses in Changsha is 10,649 yuan/square meter.

In fact, the label of "house price depression" has been around Changsha for more than ten years.

Is housing prices so low because of insufficient economic development?

Apart from economic reasons, maybe there are factors of poor living environment?

In fact, as of 2021, Changsha has been named "China's Happiest City" for the 14th consecutive year.

Tan Yang (pseudonym), a native of Changsha, bought a house of more than 80 square meters in Changsha in 2015, and only needs to pay a mortgage of about 1,500 yuan per month.

"This made me change jobs a few years ago, and I was unemployed for a period of time without any pressure. A friend in Urumqi told me that her mortgage repayment in a week has caught up with mine in a month." Tan Yang told Zhongxin Finance.

So, what is the reason for the stable and low price of housing prices in such a city with a population of 10 million and a trillion GDP?

Li Qi (pseudonym), a real estate agent who has worked in Changsha for more than ten years, believes that the "secret" of Changsha's regulation mainly depends on two points.

Data from Hunan Central Plains shows that the difference between Changsha's supply and transaction ceiling in the past two years is nearly 400,000 square meters. Except for a few months, the market has maintained a state of oversupply for a long time.

Overlooking Changsha from the plane.

"Buying a house in Changsha gives me the feeling that although it won't go up, it will definitely not lose money, and this is exactly what you need to buy a house." Liu Ran recently settled on a 142-square-meter rough house with a unit price of about 10,600 yuan. , it only takes half an hour to drive to the city center, and the house will almost be handed over in 2024.

"Now that there are many hardcover rooms, I want to choose according to my own preferences. I am very satisfied with this set."

"Changsha is now the city with the lowest housing price to income ratio among all major cities in the country. An ordinary family can buy a 100-square-meter house after working for 6.4 years. Young people can easily make a down payment for a house with their partner without relying on their parents." Changsha The relevant person in charge of the city said in an interview with the media in March 2021.

"The pressure on housing prices is lower, and although the wages are not too high, the people of Changsha have a good mentality and love to consume." Tan Yang, who is in the media industry, mentioned that there are more and more "new Changsha people" around him. This historical and cultural The famous city superimposes the business card of "Internet celebrity city", attracting more and more people to devote themselves to the development of culture, entertainment and tourism in Hunan.

"Only Chu has talents, and this is prosperous." As the couplet in front of Changsha Yuelu Academy said, Changsha, which has experienced brain drain, pays close attention to "housing and not speculating", one of the purposes is also to attract talents.

Changsha's new population in 2021 will exceed 178,500, ranking sixth among cities in the country.

"The progress of this indicator is of great significance." Hou Junjun, dean of the School of Economics and Trade of Hunan University and vice president of the Hunan Provincial Economic System Reform Research Association, believes that talents will follow talents. Strength and practical moves have produced a very good talent agglomeration effect.

In April 2022, Hunan issued the "Several Opinions on Implementing the Strategy of Strengthening the Provincial Capital to Support the High-Quality Development of Changsha City". Changsha plans to achieve a GDP of about 2 trillion yuan by 2026, with a permanent population exceeding 12 million, and multiple supporting facilities. Measures to promote the construction of a strong provincial capital from the aspects of industry, transportation, Internet, energy, and talent introduction.

In Li Qi's view, "Hunan's strategy of strengthening the provincial capital is destined to be far better than buying a house in other areas. Just looking at the educational resources that buyers are paying close attention to, the gap will be particularly large." (End)