The Economist: The world is heading towards a food disaster

Russian President Vladimir Putin's war on Ukraine has destroyed the lives of millions of people far from the battlefield. It is hitting a global food system already weakened by the COVID-19 outbreak, climate change, and energy shock, leading the world toward a global food disaster. 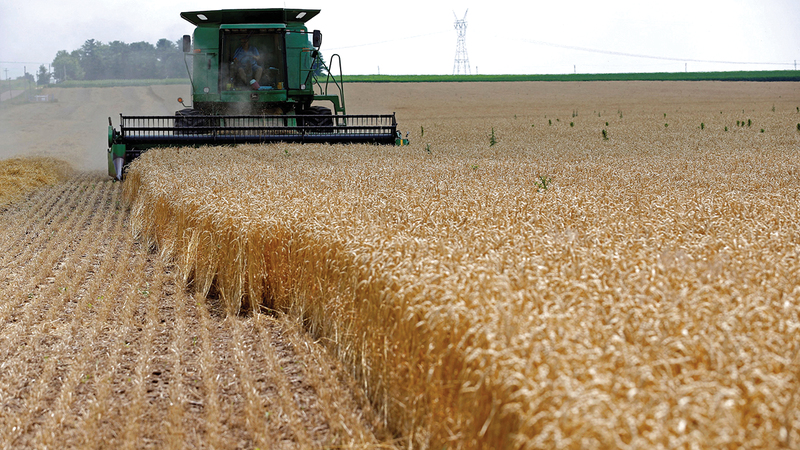 Russia uses food as a weapon in its war with Ukraine

The Economist: The world is heading towards a food disaster

Immediate relief will come from breaking the blockade of the Black Sea.

Russian President Vladimir Putin's war on Ukraine has destroyed the lives of millions of people far from the battlefield.

It is hitting a global food system that has already been weakened by the COVID-19 outbreak, climate change, and energy shock, leading the world toward a global food catastrophe.

The war led to the suspension of Ukraine's grain exports, so wheat prices rose by 53 percent since the beginning of the year, and by another 6 percent this May, especially after India suspended its exports.

UN Secretary-General Antonio Guterres warned that the coming months threaten to create a "global food shortage" that could last for years.

The Economist magazine says that the high cost of basic foods has led to an increase in the number of people who cannot get enough food, reaching 1.6 billion people around the world.

And there are about 250 million people on the brink of starvation, if the shortage of food supplies from Russia and Ukraine continues, which portends a food disaster.

Hundreds of millions of people could fall into poverty, spread political unrest, and starve to death.

So, Russia should not use food as a weapon, and world leaders should view hunger as a global problem that urgently requires an international solution.

Although Ukrainian food exports provide food for about 400 million people, the war disrupts these supplies, because Ukraine has mined its waters to deter any attack, while Russia is blockading the port of Odessa.

Even before the invasion, the World Food Program warned that 2022 would be difficult.

China, the world's largest wheat producer, said its harvest could be the worst ever due to the lack of rain.

The temperatures in India, the second largest producer in the world, threaten to deplete crops, while the Horn of Africa suffers from the worst drought in four decades, due to the phenomenon of climate change.

All this will have a dangerous impact on the poor. Households in emerging economies spend 25% of their budgets on food, and in many countries, governments cannot afford to pay subsidies to help the poor, especially if they import energy, another market in turmoil.

Countries need to work together and keep markets open. Indonesia, which is the source of 60% of the world's palm oil, has lifted a temporary ban on exports.

Europe should also help Ukraine ship its grain via rail and road to ports in Romania or the Baltic states, although the most optimistic forecast is that only 20% of the crop can be exported in this way.

Immediate relief will come from breaking the blockade of the Black Sea.

Some 25 million tons of corn and wheat, equivalent to the annual consumption of all the world's least developed economies, are trapped in Ukraine.

Russia must allow passage of Ukrainian shipping, Ukraine must clear the port of Odessa, and Turkey must allow transit through the Bosphorus.

This will not be easy, as Russia, struggling on the battlefield, is trying to stifle the Ukrainian economy.

Ukraine, in turn, is reluctant to remove mines.

Persuading them to back off will be important to countries, including India and China.

Convoys may require armed escorts backed by a broad coalition, because feeding a fragile world is everyone's business.

Fears of crop rot and shortage of pesticides

The food crisis threatens to get worse. Although Ukraine already shipped in much of last summer's pre-war crop, and Russia can still sell its grain, Ukrainian granaries, undamaged by the fighting, are full of maize and barley.

However, farmers have nowhere to store their next crop, which begins in late June, and so it may rot.

Ukraine also lacks fuel and labor for agriculture, while Russia is short of some supplies of the seeds and pesticides it normally buys from the European Union.