Hyundai Motor Group announced a large-scale US investment of more than $10 billion in time for US President Joe Biden's visit to Korea. In particular, in addition to the $5.5 billion electric vehicle plant in Georgia announced the day before, it announced today that it would invest an additional $5 billion in new technologies such as robotics, urban air traffic, AI, and autonomous driving. 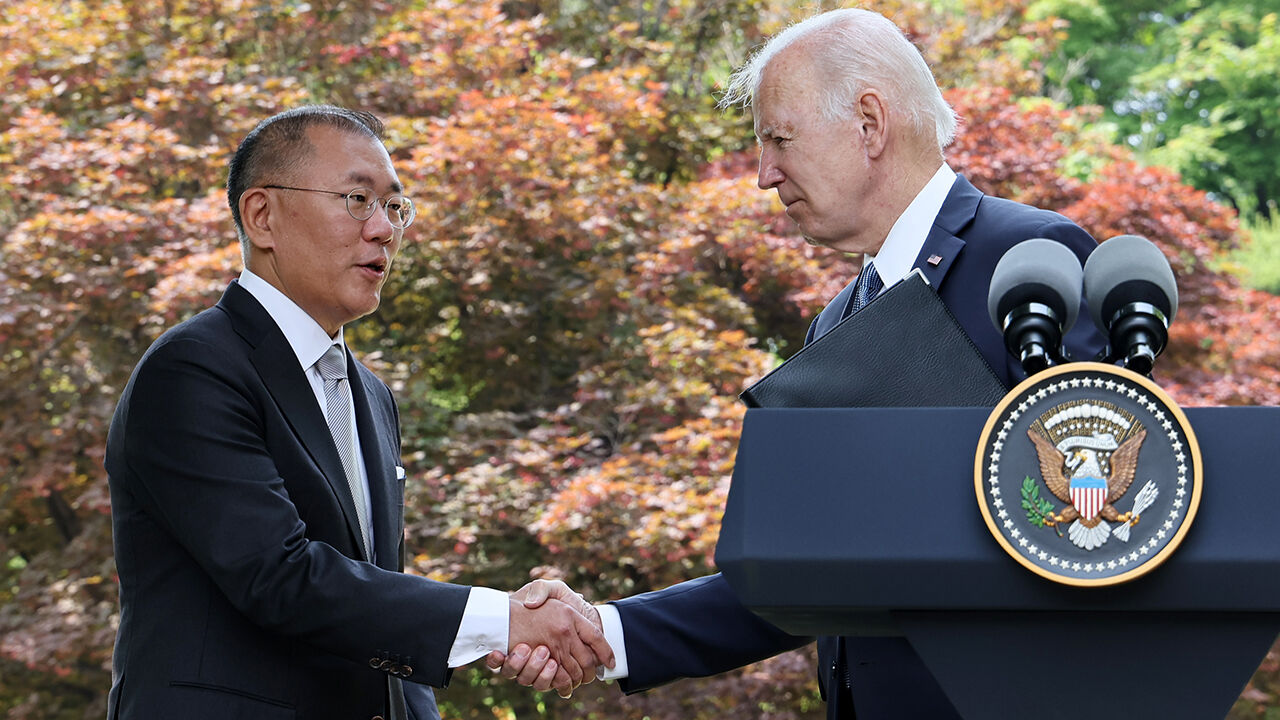 Hyundai Motor Group announced a large-scale US investment of more than $10 billion in time for US President Joe Biden's visit to Korea.

In particular, in addition to the $5.5 billion electric vehicle plant in Georgia announced on the 21st, it announced today that it would invest an additional $5 billion in new technologies such as robotics, urban air traffic (UAM), AI, and autonomous driving.

Hyundai Motor Group's investment plans announced in time for President Biden's visit to Korea are all $10.5 billion, or more than 13 trillion won in Korean money.

Chairman Jung disclosed this plan through an English speech at the meeting with US President Joe Biden, who was visiting Korea at the Grand Hyatt Hotel in Seoul on the morning of the 22nd.

Chairman Chung said, "We are planning an additional investment of 5 billion dollars by 2025 to strengthen cooperation with American companies."

This $5 billion will be invested in new technologies such as robotics, UAM and autonomous driving.

President Biden responded, "Thank you for choosing America, and America will not disappoint Hyundai."

In particular, in relation to the new investment areas announced today and the establishment of a plant exclusively for electric vehicles in Georgia, President Biden said, "The investment of more than $5 billion in advanced automobile technology and the plant to be built at a cost of $5.5 billion in Savannah, Georgia will be completed by January next year. It will create over 8,000 jobs.”

Analysts say that the Hyundai Motor Group's large-scale investment plan announced in time for President Biden's visit to Korea was considered together with the Biden administration's 'Green New Deal' policy and the 'Buy American' policy of purchasing American products. Comes out.

Shortly after taking office, President Biden signed the Buy American Executive Order stipulating that the federal government should give priority to purchases made in the United States, and from October this year, the proportion of parts produced for automobiles that can be recognized as American products has been raised to 60%. do.

What are your plans to invest in electric vehicles?

It is interpreted as meaning that the company will accelerate the transition to eco-friendly vehicles by building the first dedicated electric vehicle-only plant in the United States.

Hyundai Motor Group expects to be able to produce 300,000 electric vehicles per year when the plant starts operating in 2025.

Investment in new technologies such as autonomous driving, robotics, and UAM

Autonomous driving, robotics, and UAM, which were unveiled this time, have been pointed out as future drivers of the group, and there are many projects already underway in the United States.

In fact, it has a strong character of additional investment.

Motional is the first company in the industry to have Level 4 technology, which is a level of self-driving cars that can cope on their own without driver intervention.

In addition, next year, we plan to launch a commercial robo-taxi service in the United States with Lyft, a car-sharing company.

Currently, the United States boasts the world's No. 1 competitiveness in autonomous driving and AI technology.

In terms of simple market size, China is ahead of the US, but experts are analyzing that it can lead the global market only by capturing the US domestic market in consideration of consumers with purchasing power and cutting-edge technology.

Boston Dynamics introduced 'Spot', a four-legged robot known as a robot dog, 'Atlas', a research robot that can walk upright, and 'Stretch', a robot designed for warehouse automation. plan.

In the UAM field, Supernal, an independent UAM corporation, was established in Washington DC in 2020, and research and development of electric vertical take-off and landing devices is underway.