Officials of gold and jewelry trade outlets reported that the markets have recently witnessed a slowdown in the demand for sales of gold works, with most dealers currently anticipating more price drops in order to buy. And they pointed out, to "Emirates Today", that there are turnout rates with percentages 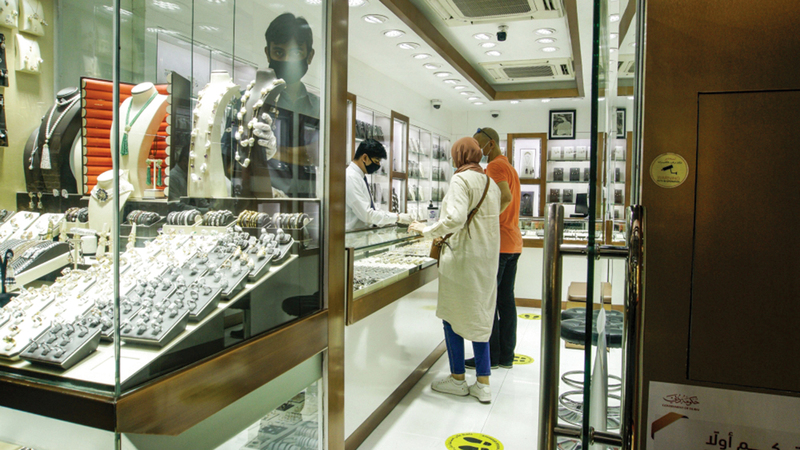 The yellow metal continues to decline .. and the gram decreases by 5 dirhams

Officials of gold and jewelry trade outlets reported that the markets have recently witnessed a slowdown in the demand for sales of gold works, with most dealers currently anticipating more price drops in order to buy.

They pointed out to "Emirates Today" that there are varying rates of demand or a cautious interest in buying gold coins of medium and small weights, for saving purposes, especially from dealers of Asian nationalities.

Gold prices fell at the end of last week between 3.75 and five dirhams per gram of various carats, compared to their prices at the end of the previous week, bringing the total decline to more than 10 dirhams in two weeks.

Sales manager at Diamond Jewelery, Dilip Soni, said, "The markets are currently recording manifestations of slow demand for the purchase of new gold jewellery, despite the fact that the current prices are at low price limits," noting that "the slow demand for buying The preoccupations are due to the preference of a large number of dealers to postpone the purchase, and to anticipate price changes, with some expecting a price decline after the successive declines in gold prices recently.”

He pointed out that "some dealers of Asian nationalities buy gifts of small and medium pieces of gold coins, for the purposes of saving and decoration."

In turn, the director of sales at the “Anan Jewelery” store, Abdulaziz Al-Khatib, explained that “the markets are currently witnessing a natural state of slow demand for the purchase of gold jewelry, which is a logical behavior for dealers, with the rapid fluctuation in prices, and the yellow metal recording successive rates of decline, making Some dealers prefer to anticipate new declines in order to buy.”

For his part, the manager of the "Dahken Jewelery" store, Ashok Poet, said that "the most prominent activity in the market is the demand of a number of dealers to buy currency products, especially from the weights of medium and small categories, which is described as a cautious turnout to buy these products, with Some expected future price drops, and postponed buying in larger quantities until price drops occurred.”

The total decline in the price of gold exceeds 10 dirhams in two weeks.