Sino-Singapore Jingwei, May 17 (Dong Wenbo and Wu Xiaowei) Because of one word, A-share listed company Heertai became famous overnight!   On the evening of May 16, Heertai released an announcement on the resolution of the first extraordinary general meeting in 2022, and its partner Beijing Zhonglun Law Firm issued relevant legal opinions. Surprisingly, in the opinion paper, the "extraordinary g 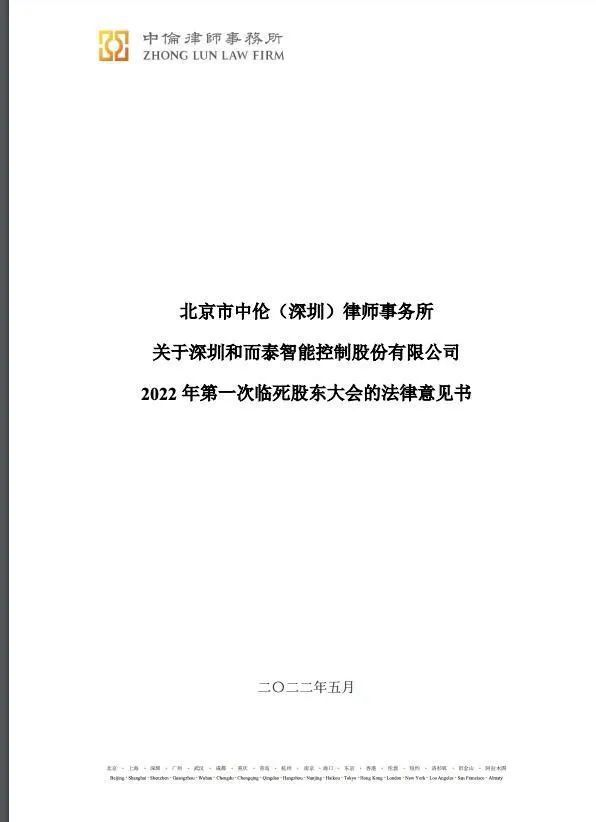 On the evening of May 16, Heertai released an announcement on the resolution of the first extraordinary general meeting in 2022, and its partner Beijing Zhonglun Law Firm issued relevant legal opinions.

Wind shows that shortly after the above erroneous announcement was released, Heertai re-released the announcement at 20:03, and the title of the legal opinion was updated to "Beijing Zhonglun (Shenzhen) Law Firm on Heertai's 2022 No. Legal Opinion for an Extraordinary General Meeting of Shareholders".

However, "V View Financial Report" (WeChat ID: VG-View) noticed that in the updated opinion, in the "Concluding Opinions" section

, "this legal opinion is in three original copies, signed by our lawyers and affixed with the official seal. There are two periods after the sentence.

As soon as Heertai's announcement came out, many investors immediately discovered "China Point".

In the stock bar, some investors bluntly said:

"This company is too imprecise, and the wording of an announcement is wrong."

"This management ability is no one else."

"It's not good if the stock price doesn't fall too much, this is a mistake."

Of course, some investors also said:

"Take an objective look at the problem"

"Lawyers Zhong Lun is quite a big law firm, hey."

"Excuse me, how can I participate in the dying shareholders' meeting?"

"Successfully on the hot search, the board secretary will increase the salary"

"Congratulations to the secretary of the board of directors for successfully gaining attention".

However, some investors believe that Heertai's incident is a hype:

"I really know how to play, and it's on fire! There are people who are so popular. If you take it, A-shares are really omnipotent!"

"I think the 'pro-SI shareholders meeting' is a premeditated advertising plan."

Board secretary and law firm speak out

On the secondary market, Harmony and Taiping opened in the morning of the 17th, and closed slightly up 0.49% as of noon, with a quotation of 14.25 yuan and a total market value of 13.02 billion yuan.

Regarding the impact of the announcement error on the company, the board secretary of Heertai responded to the "V View Financial Report" that

, and it is inconvenient to say too much for the time being.

At present, it has no impact on the company, and this matter does not involve problems at the operational level

According to the data, Heertai was established in January 2000 and landed on the Shenzhen Stock Exchange on May 11, 2010, specializing in intelligent controller technology research and development, product design, software services, and product manufacturing. It is one of the leading domestic high-end intelligent controller companies. , products include smart controllers in the fields of household appliances, health and care products, power tools, smart buildings and homes, and automotive electronics.

It is reported that the company is one of the major global partners in the field of intelligent controllers for world-renowned terminal brand manufacturers such as Electrolux, Whirlpool, TTI, ARCELIK, BSH, BorgWarner, Hisense, Haier, and Supor.

About half a minute later, the

other party said that

this is just the front desk, there is no lawyer's phone number, and the relevant situation is unclear

. "The leader is not here now, and I don't know when the leader will come."

According to the official website, Zhong Lun Law Firm was founded in 1993 and is one of the earliest partnership law firms approved by the Ministry of Justice of China.

Wind data shows that up to

Expert: This kind of error should not occur

What is the main reason for such a low-level error in the prominent position of the title?

What impact will it have on listed companies?

In this regard, Liu Chunsheng, an associate professor at the Central University of Finance and Economics, pointed out in an interview with "V View Financial Report" that this kind of thing is not uncommon. In the information released by the listed companies in the past, there may be errors of one kind or another, "I think this and the Now this kind of input method is too intelligent, but

for listed companies, especially the announcement should be oriented to shareholders and the public, this kind of error should not be made.

In fact, "dying" has appeared in the announcement of A-share listed companies more than once before.

For example, in March 2021, AVIC Heavy Machinery issued the "Announcement on Adding Temporary Proposals to the Annual General Meeting of Shareholders in 2020", in which it appeared that "the proposal has been considered and approved at the 18th meeting of the company's sixth board of directors."

Liu Chunsheng further pointed out that if it is really just a clerical error, or accidentally made a mistake, everyone may laugh it off; if it is intentional, or the mistake has caused more serious consequences, such as causing stock price fluctuations and causing losses to investors, it may be It is necessary to bear the corresponding legal responsibility, and supervision may intervene.

"Like this time, it obviously looks like a clerical error, and it may be slightly better." Liu Chunsheng said.