On May 15th, the 32nd National Day for Helping the Disabled, iQIYI Social Responsibility launched the theme plan of "Caring for the Hearing Impaired People", calling on everyone to pay attention to hearing health.   On the National Day of Helping the Disabled, iQIYI Charity Channel presented a public welfare short film "Love That Doesn't Talk". The director of the short film, Desert, told the o 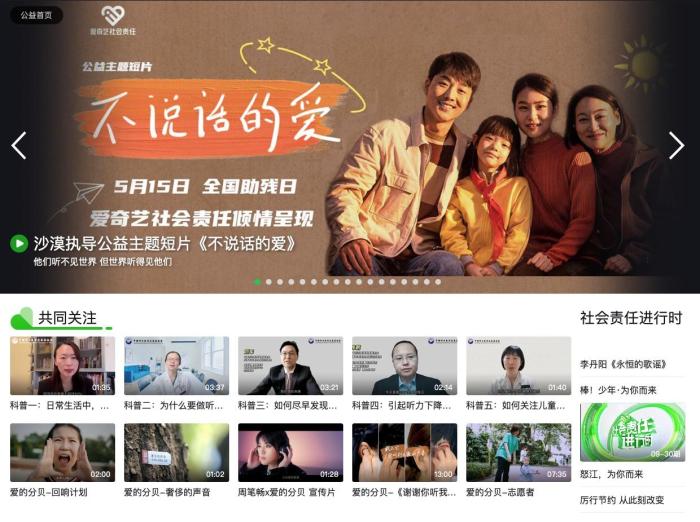 On May 15th, the 32nd National Day for Helping the Disabled, iQIYI Social Responsibility launched the theme plan of "Caring for the Hearing Impaired People", calling on everyone to pay attention to hearing health.

On the National Day of Helping the Disabled, iQIYI Charity Channel presented a public welfare short film "Love That Doesn't Talk". The director of the short film, Desert, told the original intention of the creation and called on the society to care for the hearing-impaired. The Foundation and the Beijing Love Decibel Public Welfare Foundation, through the public welfare channel, carry out hearing health science popularization in various ways such as high-quality micro-movies, documentaries, and public service advertisements on the subject of hearing impairment, and popularize hearing health knowledge; at the same time, Jiang Long, Jiang Shi Meng, Luo Mingjie, Zhou Yanchen and other 17 iQIYI star volunteers jointly launched an initiative to pay attention to the hearing-impaired group and warm the silent world with love.

The short film "Love Without Talking" directed by Desert focuses on the special group of the hearing-impaired. It tells the story of a hearing-impaired couple trying to get their daughter to speak. Let people accept the world's life values, the warm and peaceful plot contains deep feelings.

In June 2019, iQIYI and the Beijing Xinmu Foundation for the Disabled launched the "I Am Your Eye" - "Xinmu Cinema" to create a Guinness Book of Records.

In July 2020, iQIYI Social Responsibility teamed up with the "Guangming Cinema" project team of Communication University of China to launch the "barrier-free version of the film", which was premiered on iQIYI; The "Bright Cinema" feature of the movie channel was officially launched, and iQIYI became the first comprehensive video entertainment platform to launch a barrier-free commentary version of the movie feature.

Up to now, Guangming Cinema has shown 13 barrier-free films, which enrich the spiritual and cultural life of the visually impaired.

In April 2021, iQIYI and Ai You Charity Foundation released a new public welfare program called "The Invisible World". The viewing time of users on iQIYI can be converted into love points, so as to support the treatment of visually impaired children.

So far, the project has successfully funded two visually impaired children to complete operations to regain their sight.

On October 23, 2021, after the Standing Committee of the National People's Congress voted to approve the "Marrakesh Treaty", iQIYI launched the promotional films "Marrakesh Treaty, Lighting the Light for the Dyslexic" and "Listen to Me" Thank you, the Marrakesh Treaty and the National Copyright Administration's special program "Copyright Helps Go to the Light", calling on all sectors of society to pay attention to the dyslexic groups.

On May 5, 2022, the "Marrakesh Treaty" officially entered into force for China. Wang Zhaonan, vice president and editor-in-chief of iQIYI, published an article "iQIYI: Let the Visually Impaired" Share the Development Achievements of Film and Television Art", indicating that iQIYI will expand its voice for the dissemination of barrier-free film and television works, and bring film, light and hope to more visually impaired people.

In the future, iQIYI will continue to play the leading role of the Internet audio-visual platform, stick to the original intention of public welfare, promote the dissemination of barrier-free film and television works with the power of technology and culture, help the disabled to better experience the charm of light and shadow, and share the development results of film and television art with them; At the same time, iQIYI will actively take advantage of its media attributes to attract more people's attention and devote themselves to the public welfare undertakings caring for the disabled, so as to generate greater social influence.