2.1%! CPI returns to the "2 era" and may rise moderately in the future

China News Service, May 11 (Reporter Xie Yiguan) According to data released by the National Bureau of Statistics on the 11th, in April, due to factors such as the domestic epidemic and the continued rise in international commodity prices, the year-on-year increase in the national consumer price (CPI) expanded significantly. After a lapse of many months, I returned to the "2 era". CPI rise and f 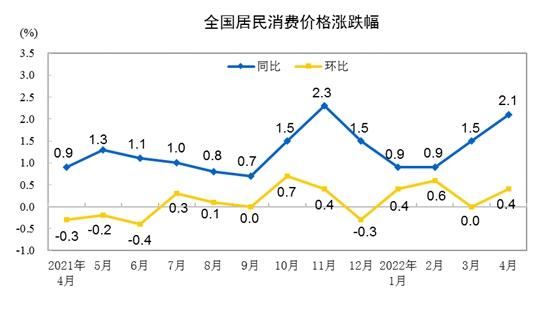 China News Service, May 11 (Reporter Xie Yiguan) According to data released by the National Bureau of Statistics on the 11th, in April, due to factors such as the domestic epidemic and the continued rise in international commodity prices, the year-on-year increase in the national consumer price (CPI) expanded significantly. After a lapse of many months, I returned to the "2 era".

The year-on-year increase in CPI rose significantly in April

According to Dong Lijuan, senior statistician of the Urban Department of the National Bureau of Statistics, from a year-on-year perspective, food prices have changed from a decrease of 1.5% in the previous month to an increase of 1.9%, affecting the CPI increase of about 0.35 percentage points.

"Food prices rose by 1.9% in April, ending the previous four consecutive months of decline and the largest increase since November 2020." Wen Bin, chief researcher of China Minsheng Bank, said that due to the rebound of the epidemic in some areas, the demand for hoarding goods There has been an increase in logistics costs, and the prices of vegetables, fruits and other foods have risen significantly.

In addition, non-food prices rose by 2.2%, the same increase as the previous month, affecting the CPI rose by about 1.78 percentage points.

"According to estimates, in the 2.1% year-on-year increase in April, the impact of last year's price changes was about 0.7 percentage points, and the impact of new price increases was about 1.4 percentage points." Dong Lijuan said that all regions and departments will take multiple measures to do a good job. Supply and stable prices were maintained, and the core CPI, excluding food and energy prices, remained stable with some declines, up 0.9 percent year-on-year, 0.2 percentage points lower than the previous month.

The pork section in a large supermarket in Fengtai District, Beijing.

From a month-on-month perspective, food prices changed from a decrease of 1.2% in the previous month to an increase of 0.9%, affecting the CPI increase of about 0.17 percentage points.

In food, due to the rise in logistics costs during the epidemic and the increased demand for stockpiling, the prices of potatoes, eggs and fresh fruits rose by 8.8%, 7.1% and 5.2% respectively.

Judging from the actual offline sales, in late April, a reporter from Zhongxin Finance visited many supermarkets in Beijing and found that the price of bulk eggs was concentrated at more than 5.5 yuan per catty, and the price of grass eggs could reach about 10 yuan per catty.

In addition, Dong Lijuan said that with the gradual adjustment of the production capacity of live pigs and the orderly development of the central frozen pork reserve, the price of pork has changed from a decrease of 9.3% in the previous month to an increase of 1.5%; the market volume of fresh vegetables has increased, and the price has increased by 0.4% from the previous month. Turned to a decline of 3.5%.

Recently, the reporter also noticed in a supermarket in Xicheng District, Beijing that pork prices have risen, and pork belly has risen by 1 yuan per catty compared to mid-April.

The prices of some vegetables dropped, and the prices of beans and peppers, which were at a high level before, dropped significantly.

Expert: CPI is expected to maintain a moderate rise in the future

Recently, the issue of price stabilization has received high attention at the national and local levels.

The Politburo meeting of the Central Committee of the Communist Party of China held on April 29 pointed out that the new crown pneumonia epidemic and the Ukraine crisis have led to increased risks and challenges, and the complexity, severity and uncertainty of my country's economic development environment have increased, and stable growth, stable employment, and stable prices are facing new challenges. challenge.

Yi Gang, governor of the People's Bank of China, also mentioned when attending the 2022 Boao Forum for Asia Annual Conference that the primary task of China's monetary policy is to maintain price stability.

"Recently, due to supply shocks and rising external commodity prices, the upward pressure on prices has increased." Yang Yewei, an analyst at Guosheng Securities, said that on the one hand, due to factors such as supply, the seasonal decline in food prices is limited.

On the other hand, although oil prices have stabilized recently, they are still high year-on-year.

Superimposed on the low base effect of last year, it is expected that the CPI growth rate will continue to rise in the next few months.

"Considering the current monetary policy and other factors, it is expected that the CPI may maintain a slight increase in the next few months." Cao Heping, a professor at the School of Economics of Peking University, told reporters.

"From the perspective of the trend, despite the existence of international imported factors and the short-term supply pressure of some fresh food, in general, there are many favorable conditions for the CPI to maintain a moderate rise." Spokesperson of the National Bureau of Statistics, Director of the Department of Comprehensive Statistics of National Economy Fu Linghui said at a press conference held by the State Council Information Office in April.

In Wen Bin's view, the current food and energy prices are still the main factors affecting the trend of CPI.

In the next stage, it is necessary to further implement measures to ensure supply and stabilize prices, ensure grain production, smooth logistics and transportation, and stabilize domestic price levels.