Zhongxin Finance, May 11 (Reporter Xie Yiguan) On May 11, the National Bureau of Statistics will announce the national consumer price index (CPI) for April. Under the influence of pork prices, the increase in CPI may continue to expand in April. . April CPI year-on-year increase or rise   In March, affected by factors such as the domestic spread of the epidemic and the rise in international co 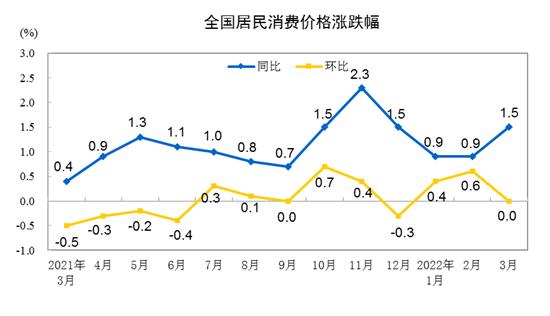 Zhongxin Finance, May 11 (Reporter Xie Yiguan) On May 11, the National Bureau of Statistics will announce the national consumer price index (CPI) for April. Under the influence of pork prices, the increase in CPI may continue to expand in April. .

In March, affected by factors such as the domestic spread of the epidemic and the rise in international commodity prices, the year-on-year CPI growth returned to the "1 era".

What will be the year-on-year increase in CPI in April?

"In terms of food prices, since mid-April, pork prices have stopped falling and rebounded. As the weather continues to warm, vegetables have entered the peak season for production and sales, and vegetable prices have fallen seasonally. In terms of industrial consumer goods, international oil prices have fallen from high levels, and domestic refined oil prices have ushered in this year. The first downward adjustment." Zhou Yue, chief analyst of fixed income at Zhongtai Securities, pointed out that the rise in

pig prices hedges against the decline in oil prices, and the CPI is expected to rise moderately

According to the report of the National Economic Research Center of Peking University, affected by the measures to protect people's livelihood and the accelerated slaughter of live pigs, the relative decline in consumer demand, and the continuous rise in upstream industrial bulk commodities, the CPI in April is expected to rise by 1.8% year-on-year.

According to the statistics of Flush iFinD, the average forecast of more than ten institutions for the year-on-year increase of CPI in April was 1.93%.

If the above average forecasts are fulfilled, the year-on-year CPI growth rate in April will continue to rise.

According to the monitoring of the National Agricultural Products Wholesale Market Price Information System of the Ministry of Agriculture and Rural Affairs, from April 29 to May 5, pork prices rose by 4.2% month-on-month and dropped 36.3% year-on-year.

The average price of 19 kinds of vegetables in 286 wholesale markets of production and sales areas across the country was 4.10 yuan/kg, down 7.0% from last week and up 15.2% year-on-year.

"The probability of a substantial increase in the average wholesale price of pork in the second quarter is low, but driven by the decline in the base in the same period in 2021, the pork CPI has a high probability of rising steadily year-on-year from April to June." Zheng Houcheng, director of the Yingda Securities Research Institute, believes.

"From the perspective of the trend, despite the existence of international imported factors and the short-term supply pressure of some fresh food, in general, there are many favorable conditions for the CPI to maintain a moderate rise." Spokesperson of the National Bureau of Statistics, Director of the Department of Comprehensive Statistics of National Economy Fu Linghui said at a press conference held by the State Council Information Office in April.

Fu Linghui said that from the perspective of demand, consumption and investment demand are still recovering, which has a limited effect on price-pulling.

From the perspective of supply, grain production has been continuously harvested and stocks are abundant; the production capacity of live pigs has generally recovered, and the supply of pork is generally sufficient.

At the same time, the market's measures to ensure supply and stabilize prices will continue to be effective, which is also conducive to price stability.

Therefore, there are still foundations and conditions for the price to maintain an overall stable and moderate upward trend.