Zhongxin Finance, May 9 (Reporter Xie Yiguan) "One cent of fat, one grain of grain; very fat, full of grain."   Fertilizers, a chemical closely related to food production, are becoming an "invisible hand" that threatens global food security as their prices continue to rise. Data map: Agricultural compound fertilizer is being loaded. Photo by Wen Jia Influenced by multiple factors, internation 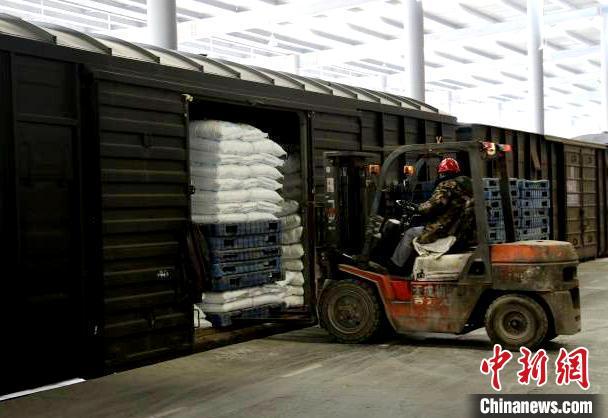 Zhongxin Finance, May 9 (Reporter Xie Yiguan) "One cent of fat, one grain of grain; very fat, full of grain."

Fertilizers, a chemical closely related to food production, are becoming an "invisible hand" that threatens global food security as their prices continue to rise.

Recently, CF Industrial Holdings, the world's largest nitrogen fertilizer producer, announced its financial report that the net income attributable to ordinary shareholders in the first quarter was US$883 million, a year-on-year increase of 485%.

The financial report shows that in the first quarter of 2022, the average selling price of CF Industrial Holdings products was US$620 per ton, an increase of 170% compared with US$230 per ton in the same period last year.

“Higher ASPs across all segments are mainly due to strong global demand and lower global operating rates due to rising global energy costs and geopolitical events, reducing supply and tightening the global nitrogen supply-demand balance,” the company explained.

In fact, since 2021, the international fertilizer market has ushered in a sharp rise due to factors such as rising prices of natural gas and other raw materials, and the disruption of the global supply chain due to the epidemic.

From India to Vietnam and the Philippines, prices for crop nutrients crucial to boosting food production will triple or triple in 2021 alone, according to Bloomberg.

After the conflict between Russia and Ukraine, the sanctions imposed by Western countries on Russia and the counter-sanction measures taken by Russia have caused the uneasy international fertilizer prices to make waves again.

On March 10, local time, the Russian Ministry of Industry stated that the country decided to ban the export of fertilizers to "unfriendly" countries.

On March 12, local time, Ukrainian Minister of Food and Agricultural Policy Roman Leshchenko said that the Ukrainian government has decided to temporarily ban the export of all types of fertilizers.

According to Bloomberg, the International Rice Research Institute predicts that rice production in the next season could fall by 10 percent, equivalent to a loss of 36 million tons of rice, which could feed 500 million people.

Humnath Bhandari, senior agricultural economist at the International Rice Research Institute, said it was a "very conservative estimate", adding that the impact could be worse if the Ukraine crisis continues.

"There can be no real solution to global food security without bringing Ukraine's agricultural manufacturing industry back into the world market, as well as Russia and Belarus's food and fertilizer manufacturing industries," UN Secretary-General António Guterres said recently.

Supply is tightening, demand is increasing, and domestic fertilizers have also risen significantly

The international fertilizer price is in short supply, and it has been soaring, becoming the "Sword of Damocles" hanging in the global grain market. What about the domestic fertilizer market?

The rise in fertilizer prices has also increased the cost of farmers to grow grain.

"Last summer, it was 130 yuan per bag of compound fertilizer, but it will become 170 yuan in autumn. The price is still high this year. In addition, urea has also risen a lot." Lao Zheng, a farmer in Zhumadian, Henan, told Zhongxin Finance and Economics reporter.

In Yongji, Jilin, a village party branch secretary said that the price of fertilizers has risen by more than 40% compared with the same period last year.

The domestic fertilizer market supply has been relatively stable, why is there a significant rise this time?

"In addition, with the rise in food prices, farmers are more motivated to plant, and the amount of fertilizer used has increased, and the price of fertilizers on the market has risen accordingly." Li Guoxiang said.

In addition, the increase in the import price of fertilizer raw materials is also a factor.

Constrained by the tight supply of domestic and international fertilizer markets, my country's fertilizer imports and exports decreased significantly in the first quarter of this year.

Guarantee supply and price, reduce the burden on farmers

High fertilizer prices have brought a lot of burden to farmers.

In the face of rising fertilizer prices, the relevant departments have taken action intensively.

Following an interview in the second half of 2021, the National Development and Reform Commission reminded key fertilizer companies not to hoard and organize potash fertilizer reserves through low-price auctions. This year's "Government Work Report" has proposed to ensure the supply and price stability of fertilizers and other agricultural materials.

In March, the central government issued a fund of 20 billion yuan to provide one-time subsidies to farmers who actually grow grains, in order to alleviate the impact of increased expenditure on grain production caused by rising prices of agricultural materials.

In addition, 11 departments including the National Development and Reform Commission issued notices to deploy spring ploughing fertilizers to ensure supply and stabilize prices.