I'm about to throw up! Hoarding Vegetables Beijingers: Vegetable Soup with Meat and Drinking for Three Days

[People's Livelihood Investigation Bureau] I'm about to vomit! Hoarding Vegetables Beijingers: Vegetable Soup with Meat and Drinking for Three Days   Zhongxin Finance, April 29 (Zuo Yuqing, Zuo Yukun) A few days after the stocking tide in the circle of friends of Beijingers, the vegetables have not been eaten yet, what should I do?   "Storing vegetables is cool for a while, but keeping fresh is 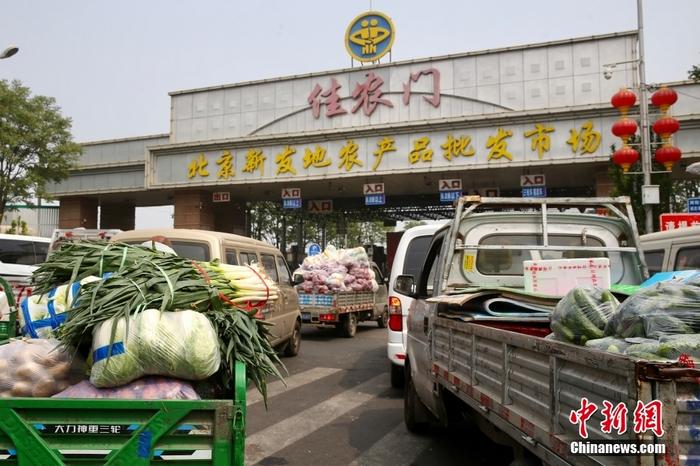 Zhongxin Finance, April 29 (Zuo Yuqing, Zuo Yukun) A few days after the stocking tide in the circle of friends of Beijingers, the vegetables have not been eaten yet, what should I do?

"Storing vegetables is cool for a while, but keeping fresh is nerve-wracking." It may be a true portrayal of many friends in Beijing recently, and they even set the freezer on fire. It turned out that fresh vegetables can be bought every day, and the supply of rice, noodles, grains and oils is also abundant...

On April 25, a truck loaded with vegetables was entering the wholesale market of agricultural products in Xinfadi, Beijing.

"Vegetable soup with meat, I

it for three days"

"Usually the unit manages meals, and it is true that they rarely cook. This wave is really sloppy." Mr. Yuan, who rarely fires at home, told Zhongxin Finance about his distress after hoarding vegetables.

"I have stocked up some green leafy vegetables, milk cabbage, chrysanthemum, etc., but I don't know how to fry them. Now I make soup at home every day. Cook the vegetables, beat an egg in it, add some salt and chicken essence, and add a few pieces of cooked meat. It's been three days."

In addition to green leafy vegetables, Mr. Yuan also bought some materials that are not easy to expire.

"In order to prevent it from expiring, I made a list of the expiration date, and even wrote it on the outer packaging with a marker, and ate it slowly in order." Mr. Yuan said, "I heard that there are groups in the community that have begun to sell excess vegetables and fruits."

According to media reports, there are even Beijing citizens who have stockpiled too much stock, saying that some vegetables are wilted, and the speed of eating them simply can't keep up with the speed of the vegetables rotting.

A Beijing netizen posted on the Moments on the evening of the 24th.

"I can't control myself, I eat snacks every day"

"On the evening of the 24th, I saw that everyone started hoarding vegetables one after another. At that time, I was a little flustered." Ms. Ke told Zhongxin Finance that after seeing the hoarding boom in the circle of friends, she also joined it.

"On the evening of the 25th, I bought more than 300 yuan of things, mainly rice, ham sausage, noodles and other foods that are very hungry and can withstand storage. Then there are quick-frozen dumplings, room temperature milk, eggs, and consumables like toilet paper. "

In addition, Ms. Ke also bought a lot of snacks: "I'm sorry to say, I usually don't dare to eat it, but in the name of hoarding, I bought it without any scruples. After I bought it, I couldn't control myself. Eat snacks every day for the past two days.”

Ms. Ke said that when she checked out that day, she found that many young people around her also bought snacks such as potato chips.

"Dare to buy snacks is actually a sign of confidence in our supply."

A Yonghui supermarket in Chaoyang District, Beijing, has a sufficient supply of fruits and vegetables.

"One person lives alone, and the family stores 20 kilograms of rice."

"I originally laughed at the salt that my relatives hoarded in 2011 and only finished it last year. I didn't expect that this time it was my turn to hoard 20 kilograms of rice by mistake." Ms. Hua mentioned the hoarding of the previous two days, still a little funny.

"On the second day after the case was reported, the supermarket in front of my house was empty. The shelves of pickles, pickles, etc. that can't be sold in a bottle for 800 years are empty."

Beijing is currently in sufficient supply of supplies

Zhongxin Finance noticed during the visit that at present, all kinds of convenient vegetable spots and fresh supermarkets have sufficient supplies.

On the afternoon of the 28th, at the entrance of a Yonghui supermarket in Chaoyang District, the staff was unloading 60 boxes of rice, and there were two rows of eggs stacked next to it.

Eggs stacked in front of a Yonghui supermarket in Chaoyang District.

The supply of the temporary control area has also been guaranteed.

On social platforms, there are also residents in the control area who have posted all kinds of vegetable bags, meat bags, and fruit bags they have received.

The vegetable through train in the control community photographed by netizens.

Screenshot from a social platform.

"Last night, the community was designated as a control area. Today, the food will be transported to the downstairs for free purchase at noon. The price of the food is cheaper than that of the supermarket!" Some netizens said.