Zhongxin Finance, April 25th: People's Livelihood Investigation Bureau | Last night, the circle of friends of Beijingers was full of vegetables! Today, Beijing's supermarkets are full of vegetables!   Author Gong Hongyu Xie Yiguan Ge Cheng   Since yesterday, "grabbing vegetables" has become a key word in the circle of friends of many Beijingers. Some citizens reported that some supermarket she 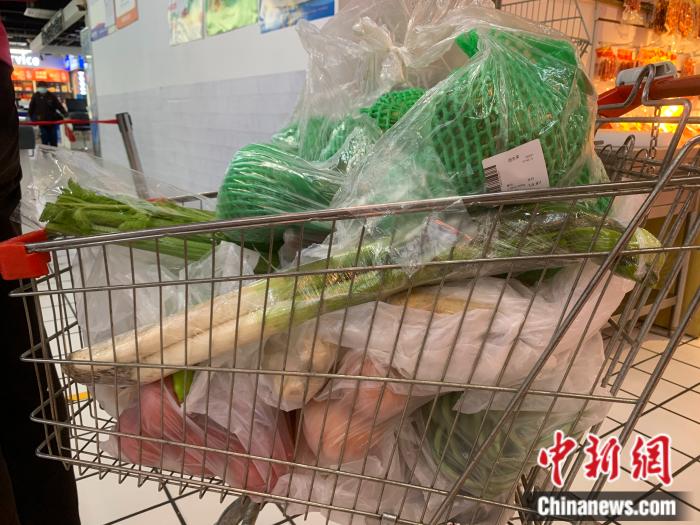 People's Livelihood Investigation Bureau | Last night, the circle of friends of Beijingers was full of vegetables!

Since yesterday, "grabbing vegetables" has become a key word in the circle of friends of many Beijingers.

Some citizens reported that some supermarket shelves were sold out, and online grocery shopping platforms were out of stock and delivery overtime.

Some people have questions, on the 25th, will the stockpiling continue?

At present, how are the supplies in Beijing?

What are the countermeasures of the supermarket?

Zhongxin Finance visited many supermarkets such as Wumart, Yonghui, Supermarket, Hema Xiansheng, and Xinfadi Agricultural Products Wholesale Market and found that offline supermarkets generally have sufficient supplies, but only eggs, green onions and other products are temporarily out of stock.

At 8 am on the 25th, a consumer bought a cart of vegetables in Wumart Supermarket.

Wumart: The amount of fruits, vegetables, grains and oils is sufficient to stabilize the price of eggs, and there is not much left on the No. 1 battery

At 7:25 in the morning, the Wumart Supermarket on Zengguang Road, Haidian District, Beijing had not yet opened for business, and dozens of consumers waiting to shop gathered at the door.

Ms. Liang, who lives nearby, said that on weekdays, there are also people rushing to buy fresh vegetables when the supermarket opens, but today there are a lot of people.

After entering the store, the reporter found that after one night, the store's rice, noodles, grain and oil, vegetables, meat, etc. had all been replenished, and the green onions that were out of stock last night had also been replenished.

Most of the consumers in line went straight to the vegetable and fresh meat section, and some even bought pork and hundreds of eggs that lasted for two months at one time.

In the Wumart Supermarket on Lianhuachi East Road, Haidian District, around 10 am, the queue at the manual checkout window was long, and the checkout took a certain amount of time.

A reporter from Zhongxin Finance found that most commodities were in sufficient quantities, but there were not many eggs and No. 1 batteries left, and there was not much rice left at a price of 1.99 yuan/catties.

The staff member said that the purchase of 10 bags of rice is also available, and the stock is very sufficient.

At 10 a.m. on the 25th, there was a long queue at the manual checkout of a Wumart supermarket.

RT-Mart Auchan: The stocks of instant noodles, eggs and vegetables are in a hurry

"There is an epidemic again, and I want to buy more, but the price is not expensive now." In the Auchan supermarket in Fengtai District, Beijing, a resident put two boxes of eggs into the shopping cart while talking to reporters.

Egg stocks in the egg area are lower than usual.

Due to too many people buying vegetables, tomatoes, zucchini and other vegetables in the vegetable area were basically sold out, and there was a long queue in the weighing area.

The supply staff in charge of zucchini said, "The

shelf is only temporarily empty, and the dishes will be filled later.

In the seasoning area, the staff told reporters, "There is no need to rush, and the goods are still abundant. The government has said that the goods can be supplied."

At around 10 a.m. on the 25th, in the Auchan supermarket in Fengtai District, Beijing, there were few vegetables left.

Supermarket: Eggs are out of stock "but they will be replenished in the afternoon"

"Pour out two baskets of tomatoes." In the hair shop of a supermarket in Ganjiakou, Xicheng District, Beijing, staff are replenishing vegetables.

The reporter noticed that at noon, the supermarket was full of people, especially in the fruit and vegetable area and the fresh meat area, many consumers came to buy.

However, despite the large number of buyers, milk, fruits and vegetables and daily necessities are readily available.

Only ordinary eggs appeared out of stock.

The staff said that there are fresh vegetables every morning, and there is no need to grab it.

And the supermarket has already sent people to pull new eggs, which will be replenished in the afternoon.

At noon on the 25th, consumers bought vegetables in a supermarket near Ganjiakou in Xicheng District.

Yonghui: Some products are out of stock but will be replenished every day

At around 11 am on the 25th, in Yonghui supermarket in Fengtai District, Beijing, there were very few onions and garlic left.

A supermarket worker is busy unpacking a bundle of green onions.

"This is the last bunch of green onions today," the staff told the grocery shoppers.

"The instant noodle area here was empty yesterday, and these were replenished this morning." The staff told reporters, "But in fact, there is no need to rob it at all. The purchase channels are smooth, and there will be stocks available tomorrow."

At 11:00 am on the 25th, in Yonghui Supermarket in Fengtai District, the staff were removing green onions.

Hema: The flow of people is stable and some fresh vegetables are out of stock

At 11:00 a.m., there were relatively few customers in the Hema Xiansheng store in Lizeqiao, Fengtai District, Beijing, and the takeaway delivery service was as usual.

On the shelves, some green vegetables were out of stock.

The staff of the supermarket told the reporter of Zhongxin Finance and Economics that the goods will be purchased tomorrow, and the goods will come every day, so there is no need to panic.

On the morning of the 25th, some vegetables were out of stock on the shelves of Hema Fresh Store in Fengtai District.

"Too many people come to buy, and they are so busy that they are going crazy." On the morning of the 25th, a vendor selling eggs in a vegetable market in Fengtai District reported to reporters.

Not only are there more people buying eggs, but Zhongxin Finance has noticed that the supply of various materials in the market is still sufficient, but the flow of people is much higher than usual.

A resident who visited the vegetable market told reporters that the overall things are relatively sufficient, that is, fresh potatoes and tomatoes cannot be found in the Mancai market.

In a vegetable market in Fengtai District, Beijing, many people are buying eggs.

Beijing Xinfadi: A large number of vegetables have been ordered and follow-up supply is sufficient

At about 13:00 on the 25th, a reporter from Zhongxin Finance and Economics visited the Xinfadi Wholesale Market in Beijing and found that many dishes in the market had been ordered.

The vegetable vendor told reporters that many supermarkets came to order, and there are currently no vegetables for bulk purchase.

The vegetable vendor also said that the follow-up supply is sufficient, so don't worry.

On April 25, the reporter bought fresh vegetables at the wholesale market of agricultural and sideline products in Xinfadi.

Unlike offline supermarkets, online shopping platforms do not seem to have recovered from yesterday's hoarding turmoil.

For example, on the Dingdong shopping app, many dishes such as enoki mushrooms, artemisia, rape, and leeks are still being replenished; the Meituan shopping app also shows that ingredients such as eggs, green onions, and cucumbers cannot be delivered on the 25th.

In this regard, Li Ren, the head of Meituan Maicai in Beijing, responded to Zhongxin Finance that there was no shortage of stock in fact, but due to the concentration of orders placed by citizens, some sites were sold out in a short time and delivery was delayed.

Li Ren said that the shopping demand of Beijing residents has seen a considerable increase, and the growth in the controlled areas is more obvious, and the number of orders at individual sites has increased by more than 300%.

Meituan Maicai has increased the inventory of meat, poultry, eggs, milk, fresh fruits and vegetables and other commodities that citizens purchase in large quantities, which will ensure that the site has sufficient inventory and stable prices.

JD Fresh also told Zhongxin Finance that in the face of the continuous surge in orders, JD.

As of 9:00 on April 25, the stock of key livelihood commodities has more than doubled, and the daily stock of fruits, vegetables, meat, poultry and eggs is sufficient to meet the 45-day turnover.

How is the supply of materials in Chaoyang District?

Citizen: "You can buy whatever you want"

The supply situation of supermarkets in Chaoyang District, which has attracted more attention during the current round of epidemic in Beijing, has also become a topic of concern to many people.

Xuanxuan, who lives near Shilibao, Chaoyang District, Beijing, told Zhongxin Finance, "I just went to Yonghui on the morning of the 25th. There are more people than usual, and things are selling faster, but I can still buy whatever I want."

Ms. Wei, who lives near the Olympic Forest Park in Chaoyang District, went to the Caixianguomei store at noon on the 25th and found that the number of people entering the store was several times higher than usual, but the supply of fruits and vegetables was sufficient, "reassuring."

On the 25th, consumers purchased goods at the Caixianguomei boutique supermarket in Chaoyang District.

Beijing: The supply of various daily necessities is sufficient and stable, and the supply is guaranteed

On the 25th, Zhao Weidong, deputy director of the Beijing Municipal Bureau of Commerce, announced at a press conference on epidemic prevention and control that the supply of various daily necessities in Beijing is sufficient and stable, and the supply is guaranteed.

According to Zhao Weidong, according to monitoring, today's seven major agricultural product wholesale markets in Beijing, including Xinfadi and Dayang Road, have a market volume of 22,700 tons of vegetables. The supply is stable and the market volume is at a high level; the average wholesale price is 3.44 yuan/kg, and the price is stable.

The trading volume of eggs was 435,000 kilograms, a daily increase of 1.9%; the wholesale price was 10.52 yuan/kg, basically the same as yesterday.

At 8 am on the 25th, the shelves of a Wumart supermarket in Haidian District were filled with vegetables.

Zhao Weidong said that in general, the supply of various daily necessities in Beijing is sufficient and stable, and the supply is guaranteed.

Zhao Weidong also said that in response to the recent increase in consumption in some community outlets and chain stores in a short period of time, Beijing has taken timely measures to guide enterprises to increase stocking and transfer of goods, and do a good job of end supply to meet the consumer demand of citizens.