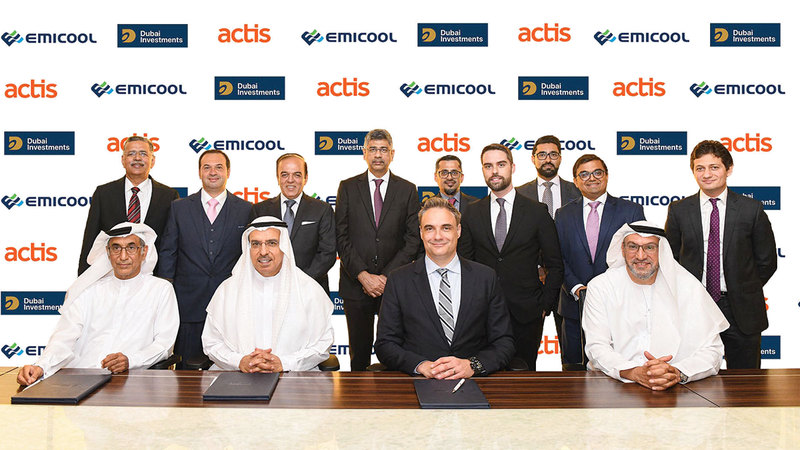 In a historic deal, the value of the cooling company was estimated at 3.7 billion dirhams

Officials of "Dubai Investments", "Actis", "Emicol" and "Al Mal Capital" during the signing ceremony of the deal.

The joint venture aims to support Emicool's strategy to become one of the leading providers of sustainable district cooling services in the Middle East and North Africa region.

The statement stressed that the deal is one of the largest deals in the district cooling industry in the Middle East and North Africa, and supports the growing demand for this industry in the region, which enhances the market value of Dubai Investments, and confirms its strategy aimed at establishing specialized partnerships with a great return on investment.

The capital of Actis is estimated at $24 billion, and it is a company that invests in sustainable infrastructure through stable operating assets within multiple sectors, which leads to an increase in the operating value of the company, and thus provides a strong cash return to investors.

The statement pointed out that Al Mal Capital, the financial and investment fund of Dubai Investments, acted as the sole financial advisor in the deal.

Khalid bin Kalban, Vice Chairman and Chief Executive Officer of Dubai Investments, said that the partnership with Actis aims to meet the growing demand for the district cooling sector by seamlessly integrating the capabilities of both parties.

He added: "We are very pleased to conclude this sale deal, as part of the company's strong plans towards implementing a wise approach to asset management, which facilitates the effective recycling of capital, for future investment," noting that "Dubai Investments" focused on re-evaluating the cost of its operations. Investing in plant development, enhancing technological know-how and creating strategic assets that have added significant value to the district cooling sector in the UAE.

He expressed his optimism that this sector will grow further through the partnership with Actis.

For his part, the representative partner of "Actis", Adrian Mukalov, described the deal with "Dubai Investments" as "historic", to support one of the leading players in the district cooling sector.

He added: "We look forward to a long-term partnership, and we will support Emicool to provide high-quality services and continuous customer service," noting that Actis sees a great opportunity for Emicool to become a regional leader in the field of sustainable district cooling and related services. Industry.

Emicool has expanded over the years, to reach more than 2,200 buildings across the Emirates, spread over eight diverse sectors, such as: housing, retail and commercial buildings, hotels, schools, universities, hospitals, hotel apartments, and residential complexes for employees in the UAE. .