Can China's foreign trade be stable even with multiple challenges superimposed?

(Economic Observation) Can China's foreign trade be stabilized with multiple challenges superimposed?   China News Agency, Beijing, April 13 (Reporter Li Xiaoyu) The "transcript" of China's foreign trade in the first quarter was released on the 13th. Analysts here believe that it is not easy for imports and exports to achieve a growth of 10.7% when multiple pressures are superimposed, but greater 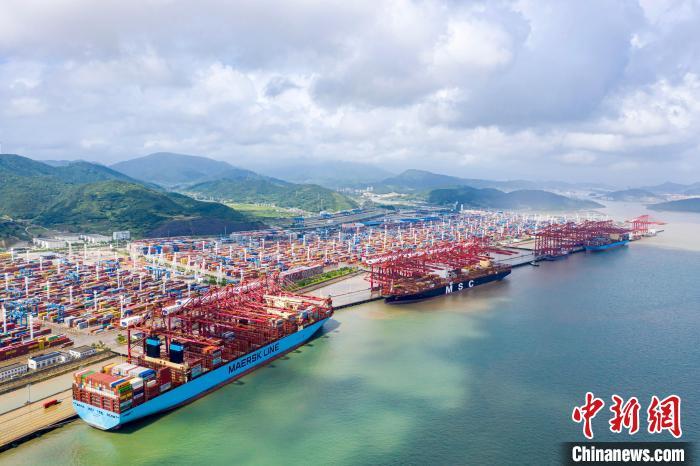 China News Agency, Beijing, April 13 (Reporter Li Xiaoyu) The "transcript" of China's foreign trade in the first quarter was released on the 13th.

Analysts here believe that it is not easy for imports and exports to achieve a growth of 10.7% when multiple pressures are superimposed, but greater challenges lie ahead.

According to official data, China's import and export volume of goods trade in the first quarter increased by 10.7% year-on-year, a growth rate of 2.6 percentage points slower than that in the previous two months, of which exports increased by 13.4% and imports increased by 7.5%.

In the words of Li Kuiwen, a spokesman for the General Administration of Customs, China's foreign trade has achieved a "smooth start".

This "smooth start" was achieved under a series of unfavorable conditions: the epidemic situation at home and abroad continued, and some local foreign trade enterprises encountered obstacles to normal production orders; although the world economy was recovering, the recovery of major economies was not as strong as before. Overseas demand has been affected to a certain extent. Last year, China's foreign trade grew rapidly, with a growth rate of 29.2% in the first quarter. The high base made it more difficult to maintain a high growth rate in the same period this year.

Considering the increasingly severe external environment for the Chinese economy, this data is already invaluable.

But there are hidden worries behind the dazzling data.

Affected by the conflict between Russia and Ukraine, the downward pressure on the global economy and trade is increasing.

The latest WTO report said that the conflict between Russia and Ukraine will reduce global economic growth this year to between 3.1% and 3.7%, and global trade growth may drop to between 2.4% and 3%, less than half of the previous forecast.

Zhong Zhengsheng said that the conflict between Russia and Ukraine may further weaken the steady recovery of the US economy and make the European economy more fragile.

Considering that both the United States and Europe are China's important trading partners, China's foreign demand is facing more and more unstable factors.

Li Kuiwen also admitted that some unexpected factors in the international and domestic environment exceeded expectations. The external environment in which China's foreign trade is located has become more severe and complex, and its development is also facing many risks and challenges.

At present, the government has already started to increase efforts to stabilize foreign trade.

Member of the Political Bureau of the CPC Central Committee and Vice Premier of the State Council, Hu Chunhua, presided over a symposium on the foreign trade situation in early April, demanding to "closely follow the situation, accurately analyze and judge", put the strengthening and improvement of services for foreign trade enterprises in a more important position, and promote the promulgated policies. Various favorable policies and measures have been implemented.

In response to various "blocking points" encountered by foreign trade companies such as poor logistics and reduced orders, the government is also taking comprehensive measures.

The Joint Prevention and Control Mechanism of the State Council recently issued the "Notice on Effectively Doing a Good Job in Keeping Freight Logistics Safe", requiring all efforts to ensure the smooth transportation of important production materials.

The General Administration of Customs is also actively promoting the upgrading of ports to help open up supply chain congestion.

As China's largest trade and investment promotion agency, the China Council for the Promotion of International Trade is also formulating and implementing an action plan to stabilize foreign trade and foreign investment, strengthen cross-border e-commerce and other new trade business information services, and help companies stabilize orders and markets.

Analysts believe that with the support of a series of foreign trade stabilization policies, China's foreign trade, which has withstood the test of many "strong winds and waves", can be expected to continue to grow steadily.