Dubai Electricity and Water Authority (DEWA) shares closed higher than expectations, 15.7%, above its listing price, in its first trading session on the Dubai Financial Market yesterday, bringing the market value of the company's shares to about 143.5 billion dirhams. Dubai Financial Market data indicated that the stock closed at a level 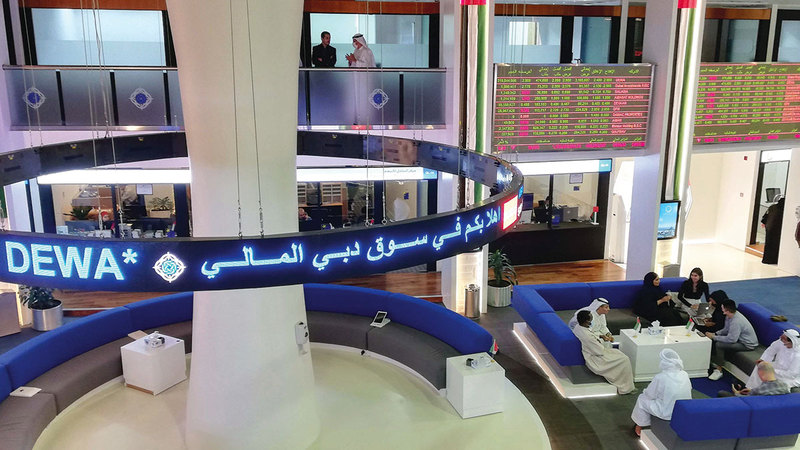 Acquired 73% of the total trading of the "market"

Dubai Electricity and Water Authority (DEWA) shares closed higher than expectations, 15.7%, above its listing price, in its first trading session on the Dubai Financial Market yesterday, bringing the market value of the company's shares to about 143.5 billion dirhams.

Dubai Financial Market data indicated that the stock closed at the level of 2.87 dirhams, compared to the subscription price of 2.48 dirhams.

The stock crossed three dirhams 10 minutes after its listing, rising more than 23%.

The general index of the Dubai market closed its trading at 3568.83 points.

In detail, the share of the Dubai Electricity and Water Authority (DEWA) jumped 15.7%, above its listing price, in its first trading session on the Dubai Financial Market yesterday, bringing the market value of the company’s shares to about 143.5 billion dirhams, an increase of about 19.5 billion dirhams from its value on a basis The price of the public offering, which reinforces its position as the largest listed company in the market in terms of market capitalization.

The stock closed at the level of 2.87 dirhams, compared to the subscription price of 2.48 dirhams.

It had crossed the level of three dirhams, 10 minutes after its inclusion, with an increase of 23% at the beginning of trading, before reducing those gains during the session.

The stock succeeded in securing a leading position in the list of large stocks, after listing it, which is considered the largest in the history of the region's markets.

The high rise of the stock reflects the company's strength and future, and confirms the expected positivity in the market with the succession of governmental and semi-governmental listings announced by the Dubai government, which number up to 10 expected listings.

With the completion of its listing, the Dubai Electricity and Water Authority has become the largest listed company in the market with a market value of 124 billion dirhams ($ 33.8 billion), based on its final offering price, which was set last week at 2.48 dirhams per share.

The financial analyst, member of the advisory board at the Chartered Institute of Securities and Investment, and Wadah Al-Taha, said that "Dewa's trading exceeded one billion dirhams, yesterday, which is a positive indicator," explaining that "the liquidity is clear and there is additional liquidity that exceeds 1.120 billion and an increase of about 16%, And that there is a global decline in financial markets around the world, and that what happened in the Dubai market is not due to the offering, but because of the anticipation of data from the United States, and the appetite for trading is high on (DEWA) shares.

He added that «the start of trading on the (Dewa) share represents a new stage for the Dubai market, adding an important quality to the market value and trading values, as well as being a solid company with an honorable history and good profits, in addition to the authority’s pledge to distribute future dividends to shareholders.”

Al-Taha pointed out that the listing of "Dewa" yesterday opened the appetite for trading on the stock and raised the value of trading, pointing out that the great success of this offering will contribute significantly to increasing the depth of the Dubai Financial Market and enhancing its investment attractiveness.

For his part, the financial analyst and general manager of “Al Ansari Financial Services” Company, Abdul Qader Shaath, said that “the first hour’s trading on the (Dewa) share, which exceeded 700 million dirhams, is equivalent to the trading of a full day’s session for the Dubai market during the last four months, which reflects the interest in Investors are very high in the stock,” noting that “the record rise in the stock was expected due to the high demand for subscription, which in turn made the allocation percentages few, forcing investors to buy from the market, given that he did not obtain a quantity of shares as expected.”

Shaath expected that "the surplus funds from the subscription, which were returned to the subscribers, will return to the market again, to buy the stock due to the low allocation rates."

In the same context, financial market expert, Mohamed Ali Yassin, said that “the listing of (Dewa) was the main event in the stock markets yesterday, as one of the most successful listings,” adding that “the stock’s movement ranged between the expected levels, despite closing at 2.87 dirhams, It still represents an increase of more than 15% from the listing price.”

He added, "For the first time in two years, the liquidity in the Dubai market exceeds its counterpart in the Abu Dhabi Stock Exchange, supported by the listing of (DEWA), and it shows the importance of the continuity of new listings and the introduction of new large companies."

In turn, a partner manager in "Global" for the trading of shares and bonds, Walid Al-Khatib, said that "there has been a state of thirst for the Dubai Electricity and Water Company (DEWA) for a long time," noting that "the company's share has reached a very important level with it reaching more From three dirhams, during the session.

In a related context, the co-head of the promotion and underwriting sector at EFG Hermes, Mohamed Fahmy, expressed his pride in the group’s role as manager of the initial offering in this historic deal in the Dubai Financial Market and the Middle East in general, as the deal opened the door to the entry of unprecedented international and local investments. To the market through the promising energy sector in Dubai for the first time.

Fahmy stressed that DEWA's offer will enhance activity in the Dubai Financial Market, and that the strong appetite of investors is a testament to the interest of all types of investors in the Dubai Financial Market and the comprehensive growth story in Dubai, pointing out that the upcoming IPOs in the UAE offer promising and diverse opportunities for investors, pointing out The Financial Group "Hermes" expects that the UAE will become an attractive regional center for investors in the near term.

It is the first listing of DEWA on the Dubai Financial Market during 2022, and the first of 10 planned offerings for government and semi-governmental companies.

The shares of Dubai Electricity and Water Authority (DEWA) have been included in the public utilities sector, without applying the approved price limits for stock movements on the first trading day, provided that they are applied on the day following the listing.

The initial public offering of the Dubai Electricity and Water Authority became the largest public offering ever in the history of the capital markets in the UAE, and the largest in the Europe, Middle East and Africa region since the beginning of 2022.

• Strong investor appetite is a testament to the investors' interest in the Dubai Financial Market, and the emirate's overall growth story.

• The stock crossed 3 dirhams, 10 minutes after its listing, increasing by more than 23%.

• Listing "DEWA", the first during 2022, and tops 10 prospective proposals for governmental and semi-governmental companies.