The top 100 real estate companies have halved their performance, and the second-hand housing prices in 100 cities have stopped falling. The property market news you care about is here 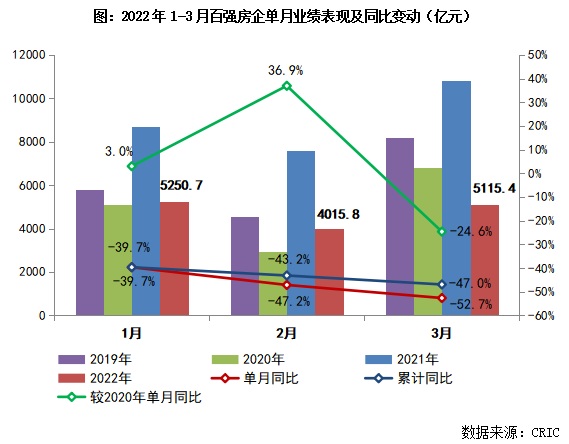 China-Singapore Jingwei, April 1st. The sales of the top 100 real estate companies in the first quarter halved year-on-year. In March, the average price of the second-hand housing market in 100 cities stopped falling and turned to rise... At the end of the first quarter, many institutions released real estate-related reports.

On March 31, the Crane Research Center released the "Top 200 Sales List of Chinese Real Estate Enterprises in the First Quarter of 2022".

According to data from the Crane Research Center, in March 2022, the downward pressure on China's real estate industry continued, and the year-on-year decline in corporate sales further expanded compared with January and February.

The TOP100 real estate companies only achieved a sales transaction amount of 511.54 billion yuan in a single month, a month-on-month increase of 27.4%, which was significantly lower than the same period in previous years; a year-on-year decrease of 52.7%, an increase of 5.5 percentage points compared with February; a decrease of 2.6% compared with January. .

In terms of cumulative performance, the overall performance scale of the top 100 real estate companies from January to March has dropped by 47% year-on-year, which is also lower than the level of the same period in 2020. The first quarter has a dismal start.

Specifically, in the first quarter, the cumulative performance of more than 800 of the top 100 real estate companies decreased year-on-year, and nearly 40% of them dropped by more than 50%.

The sales performance of most large-scale real estate enterprises is not good. On the one hand, they are affected by the market downturn and the lack of confidence in the industry.

In the second and third quarters, enterprises need to step up the promotion of supply and marketing, so as to increase the level of selling rate as much as possible.

Regarding the performance of real estate companies in 2022, Kerry Research Center analyzed that although the current policy is on the trend of easing and improving, the overall market supply and demand and transactions have not shown signs of warming in the short term. It is expected that the sales target of enterprises in 2022 will be higher for caution.

On the other hand, in the context of the slowdown in the overall scale of the industry and the continued cooling of the market, most companies are still under pressure to achieve performance and reduce sales.

On March 31, the "Research Report on China's Top 100 Real Estate Enterprises in 2022" released by the China Index Research Institute pointed out that the "increasing income without increasing profits" of the top 100 real estate enterprises is becoming more and more serious.

According to the report, the operating income and net profit of the top 100 real estate companies will maintain a growth trend in 2021.

The steady growth of completion and carry-over led to an increase in operating income and net profit. The average operating income of the top 100 real estate companies reached 49.86 billion yuan, a year-on-year increase of 19.3%, and the growth rate increased by 1.6 percentage points from the previous year.

Due to the rise in operating costs, the average net profit reached 5.62 billion yuan, a year-on-year increase of 0.4%, and the growth rate decreased by 1.5 percentage points compared with the previous year.

Affected by factors such as the new crown epidemic, continuous real estate control policies, and high costs of various types, the average net profit margin and average return on equity of the top 100 real estate companies decreased by 2.2 and 1.8 percentage points respectively compared with the previous year.

On March 31, Zhuge Housing Research Institute released a monthly report on the average price of second-hand housing in Baicheng.

The monthly report shows that the average price of second-hand housing stopped falling in March, and the prices in first-tier cities rose for two consecutive times.

According to the monitoring data of Zhuge Housing Data Research Center, the average price of second-hand housing in 100 key cities in March 2022 was 15,728 yuan per square meter, up 0.21% month-on-month and 0.10% year-on-year.

According to the analysis of Zhuge Housing Research Institute, since February, there has been a lot of good news in the real estate market. The policy side and the financial side have been jointly adjusted and moderately relaxed. Local governments have adhered to city-specific policies to promote a virtuous circle and healthy development of the real estate industry. In terms of credit, the down payment ratio and interest rate reduction have been adopted. , the adjustment of provident fund policies, and housing subsidies for talents have provided greater support to residents’ reasonable housing needs and promoted the stability of market expectations. The turnaround ended the May 2021 decline in prices that began in October 2021.

However, due to the fact that the current demand-side buying sentiment has not yet fully recovered, and the repeated epidemics in many parts of the country in March have also brought certain obstacles to the market recovery, the price of second-hand housing has increased moderately.

Affected by the uncertainty of the epidemic, the expectation of a significant recovery in the second-hand housing market in the short term is weak, and the market environment is expected to show signs of improvement around May and June.

Among them, the average market price in first-tier cities was 54,877 yuan/square meter, up 1.27% from the previous month, and the increase was 1.16 percentage points higher than the previous month. With the acceleration of lending and the reduction of mortgage interest rates to a certain extent, the demand for housing purchases has increased in the market, and the willingness of owners to increase prices has also increased.

The average market price in second-tier cities was 19,185 yuan/square meter, down 0.26% from the previous month.

The average market price in third- and fourth-tier cities was 10,140 yuan/square meter, down 0.13% month-on-month, and the month-on-month decrease was the same as last month.