Families in Spain managed to save 11.4% of their gross disposable income last year, that is, of the money that they have left free to spend or save once discounted... 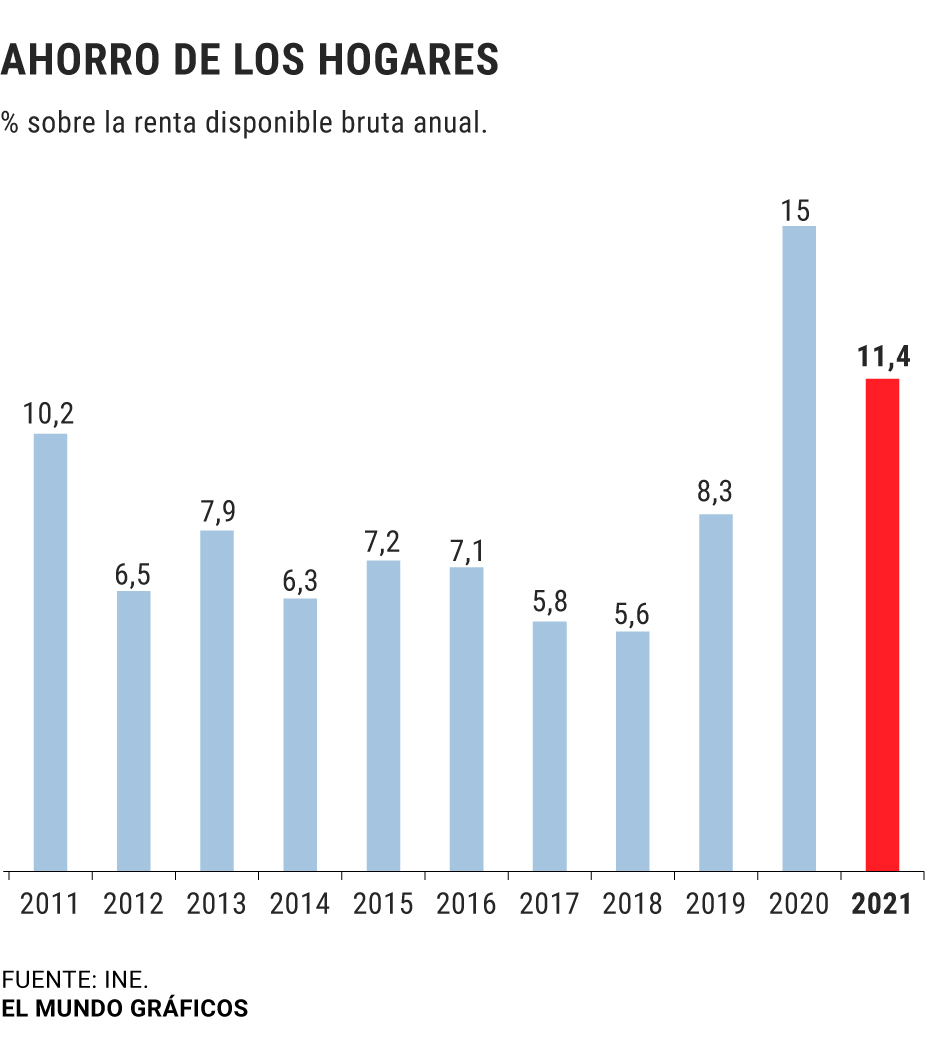 save last year 11.4% of their gross disposable income

, that is, of the money that they have left free to spend or save after deducting the payment of direct taxes and social contributions.

This is equivalent to

than what they were able to preserve in the year of the pandemic and confinement, according to data published this Thursday by the National Institute of Statistics (INE).

, however, it is expected that

the saving capacity of Spaniards will be practically halved

due to the impact of inflation on families' pockets.

Specifically, Funcas forecasts that the household savings rate this year will drop

of their gross disposable income.

This decline will place the savings rate close to the

, years in which economic growth coupled with abundant liquidity and low interest rates in financial markets acted as a catalyst for consumption to the detriment savings -when one goes up the other goes down, and vice versa-.

the savings rate remained low, below the historical average in Spain (9.5%)

and also below the 12.3% average for the Eurozone, with significant differences by country: the rate of savings of the Spanish is much lower than that of the Germans (17% on average) or the French (14%), which places us in a more vulnerable situation in the face of future shocks or a prolonged period of inflation.

On this occasion, however, the drop in savings will not occur because consumption is going to grow exponentially, but rather it will be due to the

up to one point compared to what was expected, Funcas calculates, but they will not use that income that they do not spend to save, but

will have to allocate it to pay higher prices

Even if they cut their spending volume, they will pay more for what they buy, which is why they will have to allocate part of their savings to their daily consumption.

If Spaniards maintained the same level of consumption this year as in 2021 and acquired the same goods and services, they would have to pay 880 euros more to get hold of them.

A different situation will be experienced

, who will have the possibility of saving despite the rise in prices.

In your case, however, inflation will discourage saving given low interest rates, as

money deposited in a bank account will lose value and will be more profitable to spend.

Inflation in March stood at 9.8%

, according to the INE.

A figure that could

be revised upwards in two weeks

when the Institute finishes accounting for the prices of the last days of the month and, especially, some linked to energy or fresh food that, due to their volatility and their weight in the basket of consumption, usually generate relevant changes in the data.

With that, the CPI could have surpassed double digits in March although it has not yet been made public.

So far this year,

although Funcas expects this average to drop to 6.8% for the year as a whole.

"Household demand, however, would still grow thanks to the possibility of resorting to savings, and thus cushion the decline in household disposable income," they explain.

Furthermore, there is the circumstance that in 2022 the increase in gross disposable income will not be enough to offset, in real terms, the fall in savings, since

, about four times less than what prices go up.

and increases in consumption occurred when

about the economic outlook decreased;

now the economy is once again a cause for concern for Spaniards, as was shown in the latest CIS survey, and confidence is on the decline.

, published yesterday, has plummeted in March to 53.8 points compared to 89.8 points in February,

the largest drop in a month in the entire historical series.

Despite the decline in confidence and the increase in uncertainty,

savings will fall due to inflation.

This impact of the price rise on savings can already be seen in the final stretch of 2021, when the CPI grew to stand at 6.5% year-on-year in December.

In fact, if the savings rate is observed in seasonally adjusted terms (something recommended since savings tend to decrease in the first and third quarters and increase in the second and fourth), we see that

of income available in the last quarter of the year,

2.8 points less than in the previous quarter.

In that period, from October to December, the CPI rose by an average of 5.8%.

War in Ukraine Is Vladimir Putin to blame for the rise in prices in Spain, as Pedro Sánchez says?

CrisisThe Government admits that inflation existed before the war, but anticipates that it will worsen and that its impact "will last for years"