Zhongxin Finance, March 30 (Zuo Yuqing) "Did you make an appointment?" "The thief is big"... Weilong spicy sticks, which are popular among young people and even minors, have turned over because of the packaging copy.   Recently, some netizens pointed out that the packaging copy of Weilong spicy sticks is vulgar, such as "About" written on the big gluten food packaging, "thief big" written on th 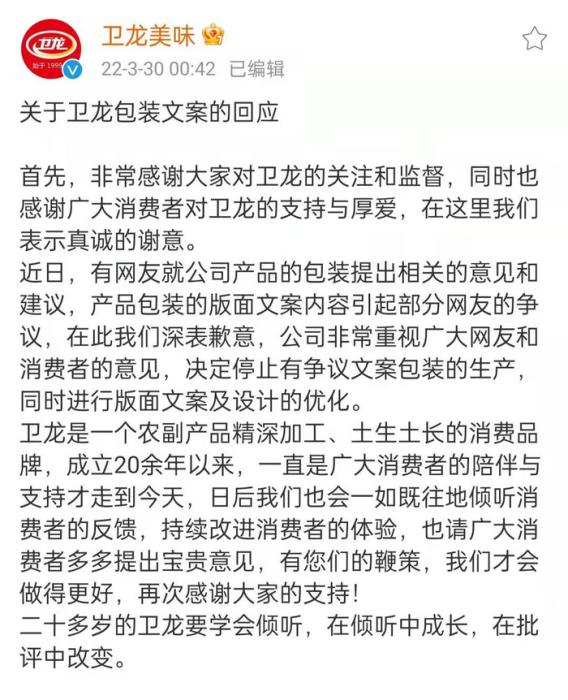 Zhongxin Finance, March 30 (Zuo Yuqing) "Did you make an appointment?" "The thief is big"... Weilong spicy sticks, which are popular among young people and even minors, have turned over because of the packaging copy.

Regarding the packaging copywriting controversy, on March 25, some media reported that Weilong customer service said that the copywriting was marked according to the characteristics of the product, and may not have thought so much when designing.

In the early morning of March 30, Weilong's official Weibo officially issued a statement: "Recently, some netizens have put forward relevant opinions and suggestions on the packaging of the company's products. The content of the layout of the product packaging has caused controversy among some netizens. We hereby apologize. , the company attaches great importance to the opinions of the majority of netizens and consumers, and decided to stop the production of controversial copywriting packaging, and at the same time optimize the layout copywriting and design."

Wei Long responded with a screenshot.

Zhongxin Finance has noticed that the current product pictures of Weilong's official flagship store have no packaging suspected of being vulgar, but in many unofficial e-commerce merchants, packaging pictures such as "About" and "Tough" can still be seen.

In the spicy strip market, Weilong can be described as an emerging leader. Not only has it flourished in the snack industry, but it has even submitted prospectuses twice in 2021, trying to impact Hong Kong stock IPOs.

Among them, in the company's 4.1 billion yuan revenue in 2020, the revenue of seasoned noodle products (that is, spicy strips) reached nearly 2.7 billion yuan, accounting for about 66% of the total revenue.

On the 30th, it seems that the controversy caused by Weilong's advertising cannot be settled. In the comment area, many netizens are still quarreling.

But then, some netizens pointed out that Weilong's marketing had played the edge ball many times before.

For example, on the eve of "Double 11" in 2016, Weilong's flagship store on an e-commerce platform was full of more obvious vulgar hints.

However, none of these trademarks have been reviewed and are currently invalid.

As for the packaging copy of this controversy, Jiang Zezhong, a professor at Capital University of Economics and Business and a researcher at the Private Enterprise Research Center of the Chinese Academy of Social Sciences, believes that the vulgarity in it is unmistakable: "If you just look at a single word, it may not be very relevant. But when these When words are put together, the metaphors in them are very obvious."

Jiang Zezhong told Zhongxin Finance that even if the copy is "labeled according to the characteristics of the product", some words are not appropriate: "Words like 'tough' are difficult to describe the taste or texture of food."

"The popularity of spicy strips by teenagers is in line with the characteristics of their age group." Jiang Zezhong pointed out that teenagers prefer spicy food, and the spicyness of spicy strips caters to this mentality.

"Parents are generally reluctant to give their children such particularly spicy food, so many teenagers will buy it in the store and avoid parents' secret eating."

Jiang Zezhong said that Weilong Spicy Tiao's deliberately vulgar edge ball on the packaging copy will have a negative impact on young people.

Weilong products on a supermarket shelf.

Photo by Zuo Yukun of China-Singapore Finance and Economics

Zhongxin Finance noticed that even among today's youth groups, Weilong and other brands of spicy strips are still very popular.

In shops near primary and secondary schools, Weilong spicy sticks can still be seen everywhere.

Here, I remind companies including Weilong that the advertising copy should be carefully considered, and do not play ambiguous and vulgar routines; some consumers who like Weilong should not be blinded by their feelings, and do not make excuses for the company's vulgarity.