Maktoum bin Mohammed: Dubai strengthens its partnership with leading international companies in the industries of the future 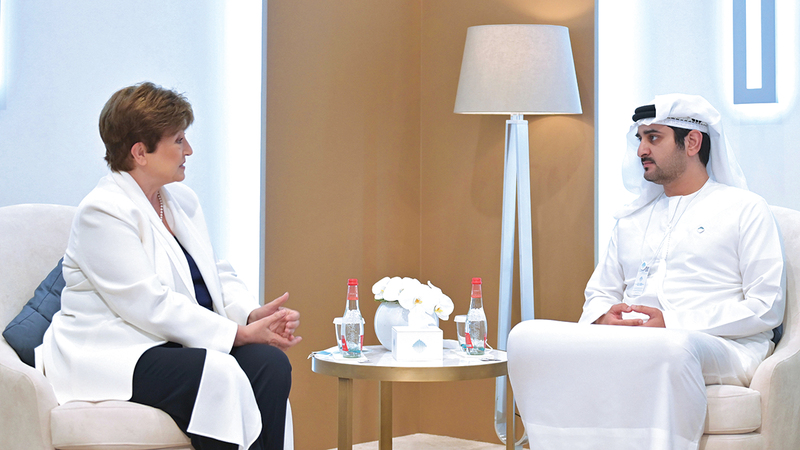 He met the President of IBM, the Director of the International Monetary Fund and the Saudi Minister of Finance

Maktoum bin Mohammed: Dubai strengthens its partnership with leading international companies in the industries of the future

Maktoum bin Mohammed during the meeting with Kristalina Georgieva.

His Highness Sheikh Maktoum bin Mohammed stressed, during the meeting, Dubai's keenness to deepen cooperation and partnership relations with major international leading companies in the field of future industries, especially those specialized in the information technology and smart technologies sector, in parallel with the emirate's endeavor to play an influential role in advancing global efforts aimed at To achieve optimal use of advanced technologies in preparation for the future and meet its requirements, and to find solutions that will help the various peoples of the region and the world to overcome existing challenges and avoid possible ones in the future.

The meeting reviewed the great opportunities offered by Dubai to investors, especially in the field of information technology, on which great ambitions depend as a fundamental pillar of future-making, in light of the great investment incentives Dubai provides, the most important of which are world-class infrastructure, and legislative and regulatory frameworks that support business, including It is characterized by great flexibility and ability to keep pace with changes to ensure business continuity in various circumstances and times, as well as the emirate's approach based on encouraging creativity and its strategy to attract the best talent and professional competencies in various disciplines, especially information technology and software, as these factors have combined during the past two decades in Consolidating Dubai's position as a preferred destination for major information technology companies, as well as aspiring entrepreneurs to launch their promising technology projects from Dubai, which has already witnessed several billion deals through which small and emerging companies have reached the world.

In addition, His Highness Sheikh Maktoum bin Mohammed bin Rashid Al Maktoum met the Director General of the International Monetary Fund, Kristalina Georgieva, where the meeting dealt with a number of issues related to the global economic situation and possible expectations for economic growth during the current and next year.

His Highness, Deputy Ruler of Dubai, Deputy Prime Minister and Minister of Finance, discussed with the Director General of the International Monetary Fund, ways to enhance cooperation with the Fund. The conversation also touched on the measures taken by the UAE government to accelerate the pace of global recovery, promote economic growth and diversify its sources and prosperity.

In a related context, His Highness Sheikh Maktoum bin Mohammed bin Rashid Al Maktoum received yesterday the Minister of Finance of the Kingdom of Saudi Arabia, Mohammed bin Abdullah Al-Jadaan, at the Leaders Building at the headquarters of "Expo 2020 Dubai".

Yesterday, His Highness Sheikh Maktoum bin Mohammed bin Rashid Al Maktoum received the representative of His Majesty the King for Humanitarian Affairs and Youth Affairs in the Kingdom of Bahrain, Sheikh Nasser bin Hamad Al Khalifa, at the Leaders Building, at Expo 2020 Dubai.